The deaths of civil engineer Jorge Pizano and his son Alejandro have shaken the nation. And the release of recorded conversations exposes yet more corruption in the Ruta del Sol II project.

The suspicious deaths of a whistleblower and his son have heaped more mystery on the Odebrecht corruption case, linked to the construction of the Ruta del Sol II route. The main witness to the project’s irregularities was 57-year-old civil engineer Jorge Pizano. He passed away on November 8 following a heart attack according to the Medicina Legal institute. Three days later, his son, Alejandro Pizano Ponce de León, who had travelled from Spain to Colombia for his father’s funeral, was poisoned with flavoured water that contained cyanide.

In the same week, a recording surfaced of a 2015 conversation between Pizano senior and Colombia’s current attorney general Néstor Humberto Martínez. At that point, Martínez was a lawyer for Corficolombiana and Pizano the comptroller of the Ruta del Sol II project.

Episol is a subsidiary of Corficolombiana, which is part of financial giant, Grupo Aval. All have been named in the Odebrecht investigation and all have denied any wrongdoing.

What is Ruta del Sol II about?

Ruta del Sol II is a 528 kilometre-long central sector of the road project that connects the centre of Colombia with the north of the country. The beginning of the road is in Puerto Salgar (Cundinamarca) and the ending in San Roque (César). The contract was awarded in December 2009 to the Brazilian building company Odebrecht.

The USD$1.6 billion project should have been finished in 2015. However, there were some unusual and suspicious circumstances about how Odebrecht won the bidding. The then Vice Minister of for Transport, Gabriel García Morales and ex-senator Otto Bula have both been found guilty of accepting bribes from Odebrecht through a Panamanian enterprise called Lurion Trading Inc.

Publish it in case of death

In August 2015, Jorge Pizano senior, auditor of the project Ruta del Sol II, talked with the legal adviser of Grupo Aval at the time, Néstor Humberto Martínez. Pizano realised that there were irregularities in the Odebrecht and Corficolombiana contracts. Although he warned the directors of both organisations, no-one did anything.

So, Pizano told Martínez that many crimes had been committed, such as falsehood in private document, bribery, fraud and money laundering. Martínez told him he would talk with the owner of Grupo Aval, Luis Carlos Sarmiento about this case.

Pizano was afraid because he had a lot of information about the scandal and it would cost his freedom or his life. He was also suffering from pancreatic cancer in its terminal stages, so was very unwell. Three months before his death, he sent the recordings to Noticias Uno, with a request to publish them in case of death or exile. Also, he was planning to have a meeting with the FBI in Washington to testify about Odebrecht’s crimes.

But Pizano would never get the chance to talk with the FBI. After his death, Noticias Uno released the conversations, which confirmed the extensive knowledge Martínez had had on one of the biggest corruption scandals in recent years – knowledge he kept had silent about for three years. 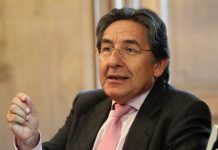