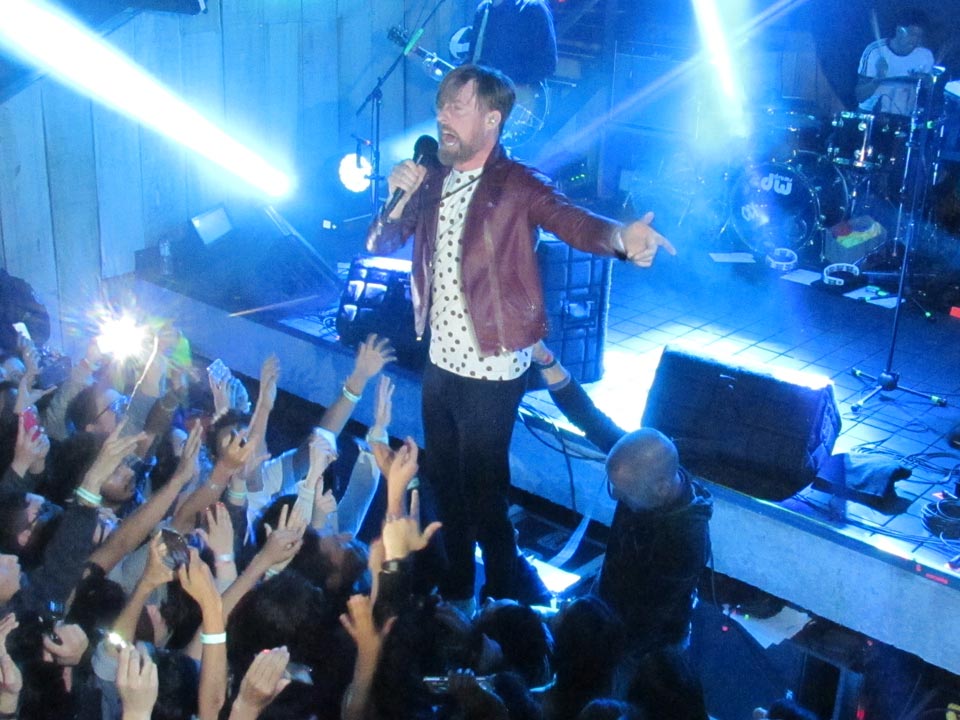 The Kaiser Chiefs delighted audiences with a powerful show, Azzam Alkadhi caught up with the band before their concert

Frenetic, energetic, demented, frenzied. These are all outstanding understatements when it comes to Ricky Wilson’s performance in Bogotá. With a delightfully cocky and self-assured swagger, Kaiser Chiefs’ lead singer bounded frantically around the small stage. At times he looked possessed, his body vibrating as if independently, his eyes fixed on everyone and no-one all at once.

Wilson – a judge on the UK version of The Voice – does not simply have stage presence; he is the stage. It can be easy to forget that there are other band members, happily taking a back seat and letting Wilson strut his stuff, while regularly shooting each other amused glances as their front man kicks the air or jumps haplessly on a wobbly speaker.

Anyone who has seen the Chiefs live will understand – the Leeds band’s first show in Colombia followed in the vein of pretty much every gig they have ever played. And they’ve certainly performed some huge concerts. From Glastonbury and Brazil’s Lollapalooza to the closing ceremony of the London Olympics and Live8 in Philadelphia, Kaiser Chiefs have earned their reputation and numerous accolades; all products of plenty of hard work.

All this, in spite of a moment of crisis after Nick Hodgson’s departure from the band in 2012.

Speaking exclusively to The Bogotá Post before their show in the capital, bassist Simon Rix explains: “There was a moment where we could have just finished, looked back on what we had done, and done something else. But none of us wanted to. We didn’t want to give up something that we’d worked so hard to achieve. That moment spurred us all on to become Kaiser Chiefs mark two. We think we got back to form on the last record and we are confident that this new one is going to carry that on.”

And when can we expect the next album? “It will be this year.” A typically vague response from the Yorkshire lad, although we should consider ourselves lucky, given that they had previously claimed the album was ‘between eight and 80 per cent done’.

Rix continues: “I am looking forward to people hearing it. I think it’s going to be a surprise, but in a good way.”

I’m keen to ask about their band name – which they took from South African football team Kaizer Chiefs – and the logic behind changing the spelling.“After our last band name [Parva], which nobody could understand, we wanted something strong,” explains Rix. “Kaiser Chiefs is pretty powerful. We liked the link with Leeds United through Lucas [Radebe, who played for both teams], who was an inspirational leader. Then I think we just spelt it wrong.”

At times, Wilson seemed a touch disappointed with the size of the crowd, repeatedly urging fans to invite all their friends for the band’s next visit. But the problem wasn’t the numbers – the queue went around the block for hours – but the strange choice of venue. For all its merits, Armando Records is fairly small and not ideal for concerts of this magnitude. Long and thin with a massive tree blocking visibility, those at the far end of the room could barely hear the music, let alone see Wilson’s antics.

Of which there were many. Trying his hand at Spanish, Wilson shouted “somos Kaiser Chiefs” to rapturous cries. Good start. Until he followed up with “somos Ruby” and his slightly surreal description of band member Peanut – apparently he is “flamo albondigas”, whatever that means.

But who really cares? Certainly not Wilson. He dropped his microphone twice, nonchalantly unfurled a massive Colombian flag over the crowd with little success and even managed to make twisting the microphone cord around the stand look cool and as if he’d done it on purpose.

Rushing off the stage with no fanfare and no farewell, the crowd obviously expected an encore. It almost seemed as if it wasn’t going to come, but they delighted fans by returning to play three more songs, starting with ‘We stay together’ – the first time the song has been played in concert – and ending with a suitably lively rendition of ‘Oh my God’. And then, again, they disappeared as quickly as they’d come. Not ones for long, emotional goodbyes it seems.

This was an extraordinary opportunity for Kaiser Chiefs’ hordes of Colombian fans to witness a positively animated display from a band that has created some truly anthemic songs – few people can deny having shouted at the top of their lungs to their songs on numerous occasions.

But they never rest on their laurels: “It’s a trait of our band that no matter what good things are happening we are already looking forward to the next one. So as soon as ‘I predict a riot’ was big, we were looking to better it, and came up with ‘Ruby’. It’s that hunger that has kept us going through ups and downs. When we lose the hunger, it will be time to give up.”

Let’s hope they stay hungry for a while to come.