Transform your word building by learning how to make a noun into a verb and a verb into an adjective. Oliver Pritchard explains that it’s all about getting the beginnings and endings right.

An important part of increasing your vocabulary is understanding word building to make new words. Not inventing new ones, but using the way the language works to build on existing ones. In this respect, there are more similarities between Spanish and English than you may think.

Just like people, words live in little families. These families share a common part, but have slightly different forms. For example, the word excite (a verb) has the following family members: Excited; exciting; excitement; exciter; excitingly.

The most common noun endings are -tion; -ment; -ness; -ity; -ence/-ance; -ism; -hood. The first five describe a concept, for example; employment, tolerance or happiness. If the root word is a verb, it’s normal to take the suffix -ment, -ity or -tion, as in government, ability or conversation. Adjective roots usually use -ness and -ance. For example, brilliance or weakness.

-ism is most often used for political or philosophical ideas. For example, communism or racism. -hood is often about people, so we see things like childhood or neighbourhood.

For people, we see lots of -er and -or. For example, football player or actor.

To change a noun into an adjective, we usually use -ic, -al and -ous. For example, economy to economic, politics to political and marvel to marvellous. These are all similar to the Spanish ways of forming adjectives. Just be careful to remember that many Spanish -ico adjectives become -al in English (politico – political), rather than -ic (politic), whereas -oso to -ous is much less complicated (fabuloso – fabulous).

-ful and -less indicate whether something contains that thing. For example hopeful is positive, because it means there is a lot of hope. However, hopeless is negative. It says that there is no hope. -able shows ability, connected to the root verb. If something is adorable (like a baby panda), it means that you can easily adore it.

Other common forms are -nant, -ive and -ent. For example, dominant, submissive and different. These almost always come from verbs. They match the nouns that follow -ance and -ion.

-ed and -ing adjectives confuse some students, and teachers are often not helpful. It’s actually pretty easy. -ing is an active adjective and -ed a passive one. In the same way that emocionante and emocionado have different meanings, so do exciting and excited. (I am excited/this film is exciting).Notice that the -ed in English and -ado in Spanish look similar and in fact almost always follow each other in usage. 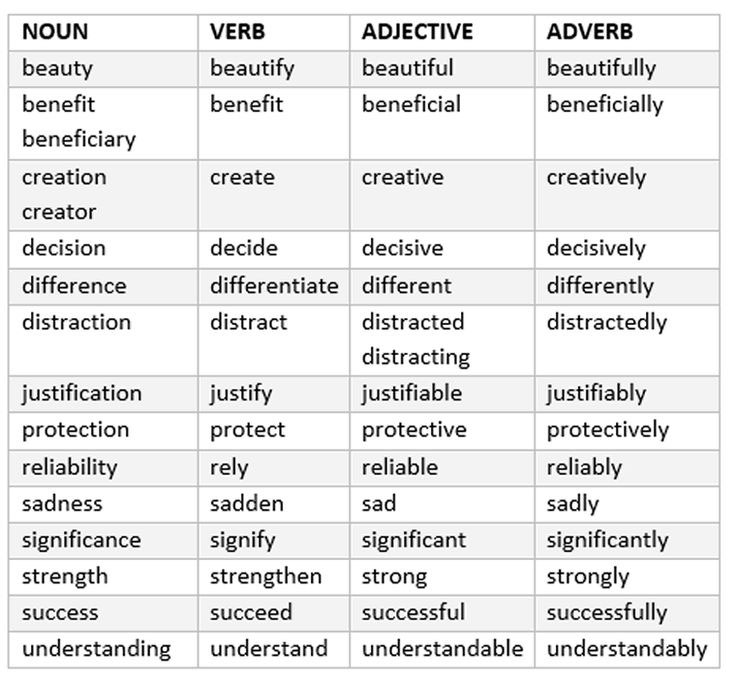 As covered by Phil Stoneman in last month’s adverbs article, these often take the ending -ly. Although there are many, many adverbs that take different forms, when building words, it’s normal to use -ly. In Spanish, this corresponds to -mente.

Prefixes usually change the meaning of the word. These are very similar to the same ones in Spanish. The im- in Spanish can become one of three negative prefixes in English, un-, im- and in-. Be aware that these have three different meanings. For example, impossible and infamous rather than unpossible or unfamous.

Over- and under- both have a meaning of an incorrect amount. Over- is too much and under- is not sufficient. Both are negative. To give an idea of being against something, try anti-, contra- or counter-. For example, antisocial; contraflow; counter-terrorism. De- gives an idea of negation, that something has been actively taken away or negatively affected. For example, deselection means to take something out of a selection. Mis- means to do wrongly. For example, someone who is uninformed knows nothing, but someone who is misinformed has information that is wrong.

Less negative are prefixes to indicate time, place or numbers. Good examples of these are pre- to indicate before or post- to indicate after. For example, pre-qualification or post-study. You should recognise sub- from common examples such as subway or subhuman, indicating an idea of being below something. To indicate that something is above, you can use supra-, for example supranational organisation. To indicate an idea of being between things we often see inter-. A very common example of this is international, but intermediate and internet are other good examples. Then of course, there’s change. This uses trans- and common examples are transsexual or transmetropolitan.

Numbers in English start with mono- or uni- for one, then bi-, duo- or di- for two. Luckily, after this it gets easier, with tri-, quad- and quin- being three, four and five respectively. If there are many, it’s normal to use multi-.

Of course, there are also more positive prefixes, such as super-; mega- and even hyper-. We’ll stop here, but there are many, many more. It’s worth finding a list and really exploring these wonderful ways to expand your vocabulary.

Where’s the word from?

Some word families are Greek, some are Latin, some are Germanic and so on. Understanding which families come from which languages will help you a lot when you are thinking about words. For example, there are many words that end in -ción in Spanish. Almost all of these can be found in English, simply with -tion. Spanish and English both took these words from Latin, so the form is very similar. It doesn’t always work (natación, for example, doesn’t exist in English), but it’s worth trying. Similarly, as we discussed at the start, -oso turns to -ous, -idad to -ity and so on.

Also, some basic rules will help you. If the word looks like -fía in Spanish, then it will often be -phy in English, as both words arrived from Greek. Examples? Geography; philosophy; physical. Of course, in Spanish the spelling stays phonetic, but in English this Greek /f/ sound is represented by ‘ph’.

All this advice will hopefully help you increase your vocabulary. You can play with the words you already know, and of course every time you learn a new word you can explore some new possibilities. However, it’s not all good news. There are a number of exceptions, usually very basic words. For example, die becomes death as a noun. Lose becomes loss, sell becomes sale and so on. Sadly you just have to learn them, but don’t let it stop you from experimenting with your word building!