Home In This Edition Tildes got you stressed out?

Tildes confuse a fair few Colombians, so it’s no wonder that learners often have a lot of trouble with these little marks. Diana Mejía explains how you can learn to love these insouciant little flicks above vowels.

If we lived in a world of monosyllabic words, there’d be no need to stress syllables. But as soon as two or more syllables come into the picture, a choice must be made: where is the stress? This means pronouncing a syllable a bit louder, longer or with a different tone of voice, and the answer can make a difference in the meaning of the word. Is it PRO-ject or pro-JECT? In Spanish, the syllable where the stress falls is the sílaba tónica, while its unstressed friend is the sílaba atónica.

In Spanish, all multisyllabic words are stressed, and they can be broadly divided into three categories depending on where the stress falls; palabras agudas, graves, esdrújulas and sobreesdrújulas.

Palabras agudas have the stress on the last syllable

Palabras graves have the stress on the second to last syllable. This is the standard stress pattern is Spanish, so when in doubt you can play it safe and assume this is where the word stress lies.

So, with that in mind, let’s get into the meat of the issue. How do we decide which words in the same category get accents? Why doesn’t aMOR have a tilde but coraZÓN does, even if they are both agudas? This is one concept that causes a bit of confusion; while all words are stressed, they don’t all have a tilde.

Related – Afan and demora: Hurry up and slow down

Palabras agudas have a tilde when the word ends in a vowel, or a vowel + n or s.

Finally, esdrújulas y sobreesdrújulas, while the term is difficult to pronounce, these are actually the easiest of the bunch. Because they are irregularly stressed words, they must all take a tilde. 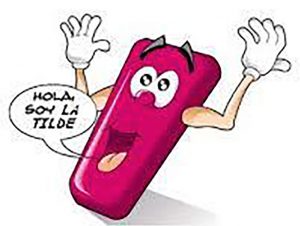 When there are two vowels in a row, things get a little bit complicated. A diptongo is a combination of vowels that is pronounced in the same syllable (bai-la, cie-rra), while in a hiato the vowels are part of separate syllables (ma–es-tro). The former always consists of an open vowel (a, e, o) and a closed vowel (i, u), and the stress of the word goes on the open vowel (bAi-la, ciE-rra) by default. However, if the pronunciation of the word doesn’t reflect this, then we must use a tilde to indicate it. Such is the case in maestría, habría, raíz and tío. On the other hand, hiatos follow the general rules mentioned above.

As we covered in the beginning, monosyllabic words, by their very nature, don’t require a tilde. However, there are some situations where we are required to use one in order to differentiate them from their homophones. A tilde that serves this purpose is called a tilde diacrítica (see purple section of table).

These tildes also help differentiate between questions, exclamation and affirmative words. Note that the interrogative form (always with a tilde) applies to both direct or indirect questions (see blue section of table).

The same idea applies to quien or quién, cual or cuál, and cuando or cuándo (see orange section of table).

The tilde diacrítica avoids the PRO-ject vs. pro-JECT confusion we have in English, by simply showing where the word stress lies.

And finally, the one that is actually a lot easier to understand if you’re an English speaker: the difference between porque, porqué, por que and por qué.

El porqué = Noun: the reason why, the cause or motive for something.

• No comprendo el porqué de tu actitud (I don’t understand the reason for your attitude).

• Todo tiene su porqué (everything has a reason for being).

Por que = For which, so that. It is a combination of the preposition por and the relative pronoun que, and is often used with an article in between them.

• Este es el motivo por (el) que me contrataron (that’s the reason for which I was hired).

While this might seem like a lot of information, try to start by identifying the tildes in everyday situations, such as signs, newspapers and menus. As you start to pick up the patterns, it will all come together to transform you into a real tildes buff.