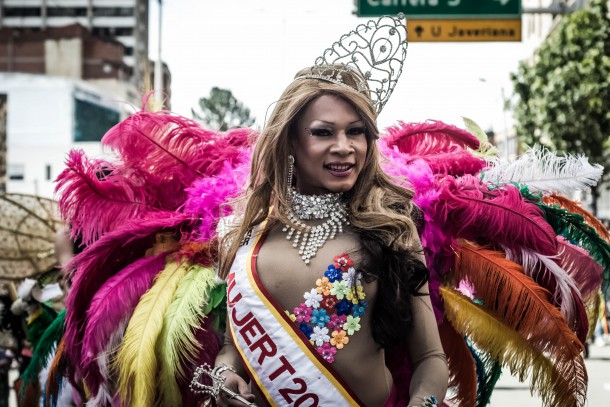 What we’re marching for

Miguel Rueda Sáenz looks at the meaning behind the parade

On June 29, thousands of people took to the streets of Bogota to celebrate love and equality – Pride 2015. Many were full of joy because of the US Supreme Court’s decision to legalise same-sex marriage across the country, although police in Turkey banned their parade because of Ramadan.

There were a range of emotions on display at this year’s march – happiness, fear, sadness and hope. Hope because the world is changing. The LGBT community is starting to feel that it is no longer relegated to having ‘other’ or ‘special’ rights. We deserve our right to love, to live and to make choices about the way we decide to live.

It is important to clarify that not every person that identifies themselves as lesbian, gay, bisexual or trans, wants to get married. What we do definitely want is the right to make our own choice. This is what the Supreme Court has given to LGBT people in the USA.

Being able to get married means that we can decide if we want to accept that civil contract, or not. Being able to believe that, by getting married, we can access the same rights as the rest of the population, means that we believe in love.

Will Colombia be next? Colombia is currently falling behind in terms of legislation. We have been through this process for almost a decade and our politicians haven’t been brave enough to accept that we deserve the right to get married and have children.

We want to be parents; we believe, strongly believe, that adoption is a loving way to have a family. We believe in love, which is what we are fighting for, nothing else. Our families and partnerships are full of love, but there are parts of society that try to push the idea that we cannot love each other.

We wouldn’t waste a minute of our lives in fighting against other people’s rights. We believe in equality, we believe that every human being deserves to have every right. We are – sadly – used to fighting for those beliefs, which is unfair: love is a right, not a privilege.

Colombia is one of the next, that is for sure, and we could feel it, see it and touch it at the parade on Sunday. Our right to get married and walk down the streets holding hands, feeling free and with no fears, is just around the corner. 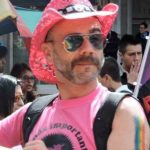 Miguel Rueda Sáenz is an LGBT academic and social activist, a researcher and lecturer at Universidad Los Andes, and the CEO of Pink Consultores

Oso you think you’re a bear!

Mixed in among the bright technicolour explosion of rainbows was a somber looking flag in muted browns. Emblazoned with a proud paw, it symbolises something different, a new march…these are the bears.

First up, let’s have Jaime explain exactly what bears are: “Well, bears are guys who are out of the regular stereotype of the average gay, and in fact, while the expression bear is used a lot in the gay community, it can be applied to straight people too.”

I’m surprised, and a little excited as I stroke my full, lush beard. There are straight bears? Maybe I have a chance… So what defines a bear, I wonder? “The body. You have to have the body of a bear, I mean, like a larger, hairier man who projects an image of rugged masculinity.”

All this sounds promising to a hirsute gentleman such as myself…could I be a bear without knowing it? “No, no way” chuckles Jaime, beer and laughter cascading out of his mouth as he struggles to comprehend this. “They have to be big, hairy men, not thin and small like you. I mean, a big body, like a rugby player.” My dreams are shattered. Plus I learn, “If a guy is hairy and big, but only fat, he is not a bear, he is a chub.” And, “If the guy is hairy, masculine, but muscular, but not that big or fat, he is an otter.”

But back to bears. Why are they so sexy for so many men? Jaime animates as he warms up to one of his favourite topics: “Well, bears are sexy the same way thin people can be – it depends on the eyes of the admirer. For guys who love guys, and I mean guys as a masculine person, bears can be so attractive. They represent power and masculinity.”

Bears have been around for a while in the UK, but I’m curious to find out how old the scene is here in Bogota. “I don’t know”, muses Jaime as he thinks back, “but it is clear that bear groups began five years ago.”

He explains that a big Colombian bear group has grown since then, with bear clubs and social groups. There’s even a Mr. Bear Colombia competition.

Have bears changed the gay scene? “They differ from the new stereotypes, I mean, about 40 years ago, men tended to be more socially male, but recently, gay men have been ‘feminising themselves’.”

In that case, do bears represent something new? “Not new, more something that breaks the rules of the ‘average’ gay. A bear can be more natural, eat what he likes, do sport, scrape their skin, get burnt by the sun”.