A society which can only punish, yet not correct its wrongdoers is doomed. The Colombian prison crisis is an accepted human tragedy. And yet, far from improving even part way, the situation is worsening.

Colombia ranks third in Latin America for the total amount of people behind bars, topped by Brazil and Mexico. This makes it the country with more prisoners per citizen in the Latin American region by far.

It comes a shameful eighth place world- wide in terms of overpopulation. Sixteen years ago, when conditions were already appalling, the constitutional court declared an “unconstitutional state of affairs’’ in Colombian prisons through the T-153/98 sentence, when overpopulation reached an inhumane 41 percent.

At that time, there were 50,000 inmates. Since then, little has been done to find real solutions, apart from building 11 new prisons, which is at best inadequate in terms of improving conditions.

Overpopulation is now close to 60 percent – an even more brutal state of affairs. There are more than 117,000 prisoners when capacity is for 75,000. Despite extra facilities in some specific cases, such as Riohacha, capacity reaches 400 percent. Inmates have less than a 60 x 60cm area to sleep in and the related health and sanitation difficulties are despicable. The Minister of Justice recognises that investing in more prisons is of little or no avail. Confronting this atrocity is an utmost priority if the crisis is to be reversed.

This level of overcrowding leads to serious health and violence problems, and the transgression of basic human rights.

A critical issue is the penitentiary health system, which is unqualified to deal with any sizeable emergency. That means that even a preventive or short prison sentence can effectively turn into a death penalty if an inmate requires urgent medical attention.

It is important to point out that over 20 percent of the prison population is people accused of committing a crime, and awaiting trial, yet it can be up to six years before their sentence is ruled. In many cases the sentence ends up being less than the time the person has already spent in the system.

So again, we see a deep contradiction in Colombian reality. While the country’s constitution advocates the protection of human rights, its justice system seems unable to stop infringing on them. No steps have been taken to change the tendency of handing out prison sentences for an ever greater array of offences.

One factor is the punitive, or rather vindictive nature of the country’s legal system and society in general, demanding that those who break the law are duly punished. Benjamin Higita, ex-congressman, points out that in the last twenty years there have been over 37 reforms made to the penal code in order to increase sanctions and revise crimes. This trend – which is partly due to the populist tendency of representatives drawing and pushing bills that give prison sentences in order to get votes – has propelled the number of incarcerations dramatically upwards in the last decade.

Another factor, which influences the upward trend just as much, if not more is the penitentiary industry. This is set up to provide the infrastructure to house, feed, invigilate, and manage the prison population.

The budget allocated per prisoner per year is close to COP$13 million, (three times the amount the state invests per student in its education budget).

That adds up to over COP$1.37 trillion, which is big business. Writers and human rights activists such as Angela Davis or Nils Christie illustrate the dangers of the intertwined relations between economy and justice, especially in the United States.

However, in the Colombian case, it is difficult to see where the money is going. The system has a huge financial deficit and the National Penitentiary Institution (INPEC) is understaffed by around 8,000 workers, according to their trade union. As a result, the number of guards in charge of prisoners is way under the minimum required to assure basic order. There is around one guard for 20 prisoners, and in some critical cases only one guard per 1,000 – meaning that they are both overworked and at substantial risk. A reason behind regular strike action.

The arguments that legitimise penal justice start to fall apart when the system cannot guarantee basic rights to either detainees or those in charge of them. An important fact that sheds light on the extent of the crisis, is the pitiful amount of funds used in activities for rehabilitation or re-socialisation. On average, around COP$150 – yes, one hundred and fifty pesos, the price of a cigarette – is invested per person in prison per day, according to the Defensoría del Pueblo (the prison ombudsman).

As the country deals with the notion of transitory justice, some sectors of society are demanding the imprisonment of those who have committed crimes related to the violent internal conflict. Whether impunity is granted or not, it stands to reason that a reform to the justice system will also be integral to the peace process.

Peace process aside, the numbers speak for themselves. There are about 30,000 people serving sentences for homicide and at the same time, an acknowledged 98 percent impunity for murder. That means there are millions of people who should be serving time, contrasted with a great majority of people in prison who have not committed crimes that endanger basic citizen’s rights. Authors on the subject, such as Sebastian Scheerer and Alejandro Gomez Jaramillo, with his book, ‘A World Without Prisons is Possible’, demonstrate how the concept of restorative justice is crucial, if society is to find realistic paths to end conflict.

Let’s commemorate the 40th anniversary of Michel Foucault’s masterpiece, ‘Discipline and Punish’, by encouraging and demanding that the institutions in charge look for immediate and profound changes to solve the puzzle of the inhumane madness that prisons have become in Colombia. The issue is not a simple one, and the government does not have the capacity to reach all the practical and real answers required in the short term. A great input is needed not only in terms of funds, but also creativity and urgent humanitarian action. Everyone with any means of contributing has a moral obligation to help alleviate a human tragedy of large proportions.

Originally from Colombia, Wally Broderick moved away when he was younger and returned to the country 12 years ago. He has become acquainted with the situations in Colombia’s penitentiaries first hand through visits to a school friend who is in prison here. 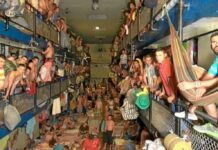