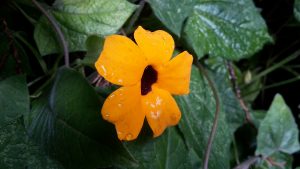 Were it not for its beautiful flower the ojo de poeta would be a nondescript vine that silently choked everything in its path. Instead, the plant demonstrates its orange menace all across the mountain forests of Antioquia enveloping large swathes of green and decorating trees like festive Christmas lights.

Although the ojo de poeta wraps itself around trees, they don’t act as a parasite. Without penetrating the tree’s internal system, it starves its host of the air that it respires through the trunk and branches. By covering its victim entirely, it prevents the vital gas exchange that trees undertake in order to survive. 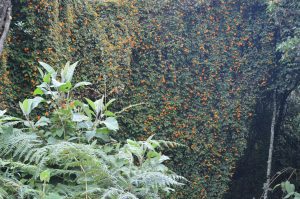 Although found in many parts around Antioquia, the epicentre of its invasion is along the mountains of Arvi, where it’s orange corolla can be found in almost every part of Medellín’s iconic national park. Around 20 hectares in Parque Arvi alone are estimated to be blanketed by this flower as they prefer higher, cooler climes around 2,000m to 3,000m above sea-level.

The situation at Parque Arví has gotten so drastic that they’ve enlisted the help of the team at the Biological Sciences Department at EAFIT University. At this stage the only thing that can be done to rid the region of the plant is to literally pull the problem out by the root, which is both time and labour-intensive.

As Parque Arvi is a natural water reserve, no insecticide or pesticide can be used in its removal. So teams armed with backhoes and machetes have committed to removing the species from the region.

The project has been running for a year now where a team from Parque Arví undertook the first cleaning and, 6 months later, a team from EAFIT University came by to see that there had been significant resprouting in that short time.

Speaking to The Bogotá Post, Dr Nicolas Pinel of EAFIT said that the main question the team wanted answered was how intensively they would they have to keep coming back to make sure that they removed all of the latent seed.

The clean-up proposal is in large part an initiative of the Secretaría del Media Ambiente (the local environment authority) though Pinel is uncertain whether enough is being done to reduce the damage the plant is doing. “At the moment as there have been no strategies shown that have been effective, they are providing for crews that come and clean up the sites and try to sustain the area as best they can,” he said. 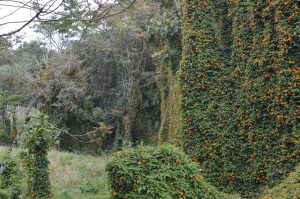 Before trying to understand best how to contain the plant–referred to as Thunbergia Alata in its Latin nomenclature–the first stage of the project will be in trying to understand the underlying biology of the plant and, therefore, how the ojos de poeta are so successful in making its way around.

At this stage they’re very much in the dark as to how the plant spreads but Pinel has a few theories. On the one hand, they believe a pollinator may be involved, with the chief culprit being a local species of bumblebee.

Another theory lies in the explosive nature of their seed pod which has a catapult mechanism that allows them to propel the seeds as the seed pod matures, dries and splits in half.

“They’re ballistic,” Pinel said definitively, “they have enough power to eject the seeds for up to 11 metres.” With the ability to climb on fences and electricity poles, the seeds of the ojos de poeta also travel downstream and infiltrate the river banks across Antioquia.

“It likes to climb, like a creeper vine,” Pinel said, “so sietecueros, carboneros, trees like that. There can be a thousand seeds in a square metre which means you’ll have to come every month to pick up all the plantlets that have sprouted.”

The ojo de poeta is thorough enough to choke and displace all of the native trees. “So far there doesn’t seem to be a species that hasn’t been colonised by it.” Pinel said. 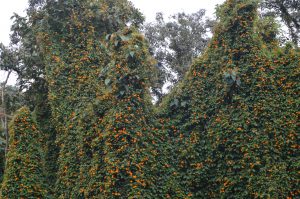 The ojo de poeta is by no means an invasive species in this part of Colombia alone. It is in fact a global menace that has travelled the far reaches of the globe. Originating in East Africa, the plant known in English as Black-Eyed Susan vine in has spread as far wide as Polynesia.

Forrest Starr, a biologist at the University of Hawaii, told The Bogotá Post that the species was “locally aggressive, blanketing the landscape” in Maui and that “areas where it has established to date are generally pretty degraded, with very few native plants. Native plants displaced are mostly mesic species found in steep gullies. Any plant growing in the same area as this species can be displaced.”