We speak to the people behind yesterday’s protests outside the Brazilian embassy to put pressure on the government to take action to stop the Amazon rainforest fire.

Crowds of people, including locals, foreigners, and indigenous groups, protested outside the Brazilian embassy in Bogotá yesterday, August 23. The idea was to put pressure on Bolsonaro’s government to take urgent action against the ongoing fire in the Amazon rainforest. Also attending the protest was the representative of change.org for Colombia, Jonatan Rodríguez, to hand in to the embassy a petition with currently over three million signatures. We spoke to Jonatan afterwards to find out more about the petition.

The Bogotá Post: What exactly took place today in Bogotá?

Jonatan Rodríguez: This afternoon, just after midday, hundreds of citizens gathered together in protest outside the Brazilian embassy to demand that Bolsonaro’s government prioritise the environment and take action to save the Amazon rainforest. We want them to take urgent and immediate action, in order to save all the ecosystems that are being lost and we want to understand exactly which actions the Brazilian government plans to take.

TBP: Why did you start this petition?

JR: We started this petition four days ago, and it has been a massive movement. In fact, it’s change.org’s biggest campaign right now, given that along with a Brazilian petition it has received more than eight million signatures.

People are getting involved because the Amazon is up in flames right before our eyes. This could lead us to a point of no return, in terms of the loss of biodiversity and ecosystems that represent 20% of our oxygen supply. That’s why people are really getting involved by signing a petition that asks for action to be taken by the governments in countries like Mexico, Peru, Brazil, Bolivia, and even Argentina – the whole of Latin America, really, so that these countries can implement urgent measures in the Amazon.

The campaign has taken off rapidly and has been successful in getting millions of people to come together for a common cause, and we at change.org help these causes via online platforms so that people can share them and help make them go viral.

TBP: How does Change.org reach its goals?

JR: What we do is support the petition and put pressure on those making the big decisions to respond to the voice of the public. For example, yesterday we handed the signatures to the Brazilian embassy, and told them that we need an urgent response regarding the actions they plan to take to find a solution to this problem.

Related: Deforestation in Colombia, the forest is burning

TBP: How did the Brazilian embassy respond?

JR: The Brazilian ambassador, who received us this afternoon in his office, told us that Bolsonaro’s government is very concerned about what is happening in the Amazon. He promised to bring our demands to Brazil so that they can continue to generate dialogue with the public and implement better ways to care for the rainforest.

TBP: What can the public do to help?

JR: Anyone can help with just one click, by signing the petition at www.change.org/incendiosamazonia and by doing so can take part in this huge movement in which we will inform you of what other actions you can take. You can also help us by donating to the campaign via our fund ‘Amazon defenders’.

TBP: Are there more events planned?

JR: In the next few weeks we will have more events where we plan to collect more signatures for our petition. We also plan to organise more protests, as well as other events, and will be keeping you updated on these events via the petition’s online updates. 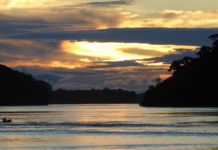 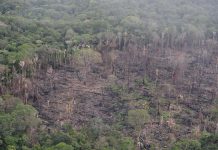