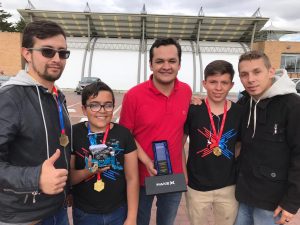 Earlier this month, a robotics group from Rionegro, Antioquia, took first place in the Make X Tournament annually organized by Make Block. This tournament is based around ‘educational’ robotics and allows robotics fans and programmers to develop technological solutions around challenges that the city faces.

Tomás Alzate Duque and Carlos Manuel Puerta Marín were the two winners of the competition, which will now lead them to compete on December 7th, 8th and 9th in an international robotics tournament that will be held in China.

“This is the first time this tournament has taken place in Colombia. It is a national tournament, but it is growing more and more worldwide. The boys faced metropolitan, environmental and mobility challenges and were given an adapted runway–measuring three meters in both width and length–where they could simulate the challenges” said Sebastián Marín, advisor to the Subsecretariat of Science, Technology and Innovation of Rionegro.

Undoubtedly, Tomás and Carlos’ result is due to the commitment they have had over the last three years, constantly participating in activities around robotics and programming.

“They participated representing a robotic group from Rionegro and have shown the results of three years of training”, Marín concluded.

This article was originally written by Alejandra Eusse in Spanish and was translated into English by Alejandra Marín.