Home Art Sako Asko: A window into your soul

The latest exhibition from Sako Asko invites us to examine our own self-perceptions.

Tucked away behind the shirt shops of quinta and a stone’s throw from Universidades station is art gallery Street Lynx. It’s a hot Saturday afternoon when I call by for our interview, conducted in the gallery itself. The atmosphere is convivial and my dogs are welcomed too. The walls are liberally plastered with art, a veritable smorgasbord of images glaring down at us as we settle down for the talk. No minimalism here, that’s for sure.

Their hot February show features Santiago Oliveros, a largely self-taught artist who goes by the name Sako Asko. He’s young and open-minded, keen to avoid cliché. Working in a pop-art style and heavily influenced by comic book imagery, the work is colourful and bright, with bold Colombian colours splashed liberally around. However, the themes within are often dark and hint at depths concealed below the bright colours.

“It doesn’t have a great connection with what is called Colombian art,” he explains. “But equally, the palettes of colour that I use are related to the old bus placards, colours that are common in the tropical culture of Colombia.” A lot of it references the absurdity of modern life – dummies on cell phones, for example. Are you suckling the news right now on your cell phone?

While the colours come from Colombia, more international influences are evident in the forms he uses. “Aesthetically, I’m interested in American comics, instruction manuals and leaflets, signs. Also mythology.” It’s a wide-ranging collection of interests, but for Sako, “The line connecting it all is self-observation. The central theme of the work is the window, which is a metaphor for perception. When you observe from a window, you interpret the landscape, your perceptions of what is there.”

Like many other urban artists, he hasn’t always worked in traditional gallery spaces like Street Lynx. “At 16, 17 years of age, I was doing graffiti, and I still paint sometimes in the street. In fact, tomorrow we’ll be making a mural close to here.”

Sako claims that, “My biggest inspirations are my experiences in life, of the people in my life like friends and family. I’m interested in themes like psychology, psychoanalysis, mental illness.” That’s evident in the piece he says is his favourite: a baby, entangled in its own umbilical cord. It carries a haunting quality as well as an arresting visceral image. “It’s similar to how we are with family,” he says.

He’ll also be releasing a compilation of images featuring his character el viajero later this year. “He’s someone that has gone down well with fans when I’ve put those images online, they’ve always been segments of a story, and now I want to collect them together”

Gallery manager Lorenzo Masnah explains that the gallery is designed to showcase young artists rather than the more conservative choices to be found in other city galleries.

The gallery reflects its surroundings, vibrant and relentlessly urban. As the Candelaria chaos swirls about outside, some of that frenetic energy is captured in the art visible on the walls.

It’s affordable art as well – with smaller pieces going as low as COP$50,000. This makes it work that is genuinely accessible, which reinforces the connection between artistic community and collectors. Despite this, Lorenzo says that foreign buyers represent a large proportion of their sales.

To put that price tag into perspective, even prints from someone like Banksy will set you back thousands of pounds. Sako says, “We say that with regards to the prints, it’s a product that’s accessible to everyone.”

Street Lynx gallery is at Calle 18 #4-92 and the exhibition runs from Saturday, February 8 until March 2. The gallery is open Tues-Sat, 11am-6pm. Or follow the gallery on instagram. 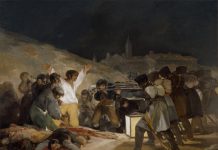