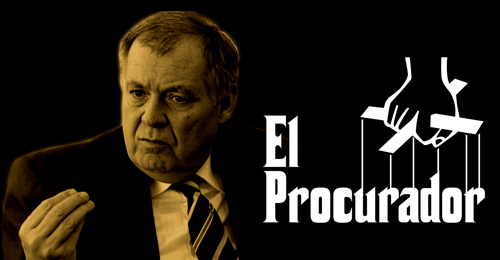 Procurador Alejandro Ordóñez is in charge of supervising most of Colombia’s public servants, and as such is one of the most powerful figures in Colombian politics. Mike Mackenna argues that Ordóñez has used the office to further his own political career and set up a run for presidential candidacy in 2018

The idea of an all-powerful government official who can impeach corrupt public servants at will might sound appealing, considering that so much corruption in governments around the world goes unpunished. That idea might seem especially appealing in Colombia, plagued as it is by corruption. In practice though, having such an official has only helped prove the enduring truth of that old saying about absolute power corrupting absolutely.

Alejandro Ordóñez was first elected as procurador in 2009, taking over an office with the sweeping mandate to supervise most public servants and state agencies. He has taken full advantage of his powers; suspending or removing from office about 2,700 public officials in his first four years as procurador, for an average of almost 700 per year. His predecessor, Edgardo Maya, had a total of about 2,400 in seven years in office, averaging about 350 per year. Before Maya and Ordóñez, no procurador since 1991, when the new Constitution created the current incarnation of the Procuradoria, had even averaged 150 suspensions and destitutions.

That could be taken as an encouraging sign of an intensified battle against corruption, and Ordóñez has indeed impeached some officials who are widely agreed to have been corrupt, like the Moreno brothers (ex-Bogotá mayor Samuel, and ex-Senator Ivan), who led the contracting carousel, a system of granting public contracts in exchange for bribes which cost Bogotá an estimated COP $2.2 billion. However, there is very good reason to believe that Ordóñez’s impeachments and other political manoeuvres have more to do with a political power grab than with demanding honesty from public officials.

Clearing a path to the presidency

Besides the Morenos, Ordóñez’s impeachments have included high-profile names from across the political spectrum, including allies of right-wing Senator Álvaro Uribe, as well as moderate and leftist politicians. Possibly his most notorious impeachment was that of left-wing Bogotá Mayor Gustavo Petro, which was eventually overturned.

Ordóñez’s far-right, strict Catholic beliefs have led many to believe that the impeachment of Petro and other leftist politicians was a political crusade driven by ideology. Perhaps, though, that’s not quite the right interpretation. The more accurate judgement might be the one given by Petro himself, currently facing another attempt by Alejandro Ordóñez to remove him from office: “Ordóñez is going to impeach me because he sees me as an opponent in the 2018 presidential elections.”

Some might dismiss this as another sign of Petro’s supposed persecution complex, but Petro’s statement looks more believable when you consider that Ordóñez is also investigating popular Antioquia governor and presumed 2018 presidential candidate Sergio Fajardo for a charge that columnist Héctor Abad describes as a “dirty trick.” The current favourite in the 2018 presidential race, Vice President Germán Vargas, was also investigated by Ordóñez in 2012, though that investigation was then dropped.

If Alejandro Ordóñez is setting up his presidential candidacy, it’s clear what voting block he is courting: opponents of the peace process with the FARC.

His anti-peace process stance has been on full display as he fights efforts to give him a dose of his own medicine. Ordóñez is currently trying to avoid being removed from office for engaging in the unconstitutional practice of “yo te nombro, tu me nombras” (“I name you, you name me”) in order to win re-election as procurador in 2013. Ordóñez had given jobs to family members of judges and congressional representatives, who in turn had voted for his re-election. This impeachment trial gave him a chance to show off his own persecution complex, as he claimed that the case was a joint effort by the government and the FARC to sideline him as one of the peace process’s most prominent critics.

It was far from the first time Ordóñez had criticised the peace process. He has said that the FARC attacks on infrastructure carried out a few months ago were the result of the government negotiating with them without setting any conditions. He has also called for an end to the dialogues after attacks by the FARC, and stated that the talks should not last past the end of this year.
Media manipulation

Besides criticising the peace process, Ordóñez has been a fierce critic of left-wing ideas in general. Ordóñez is not just setting himself up as the candidate for opponents of the talks, but as the representative of all those who think Colombia is taking a dangerously liberal turn away from its traditional values.

Alejandro Ordóñez deftly combines this unapologetic Catholic conservatism with a genius for gaining media attention. When Santos suspended the possibly cancerous crop fumigation used to combat coca and marijuana cultivation, Ordóñez gave him the vulgar label of “culipronto”, an insult that predictably dominated newspaper headlines (“culipronto” is untranslatable, but it combines the vulgar Spanish word for “anus” with the word for “soon”, and it refers to people who make rash, poorly thought-out decisions in order to get quick results). When Mayor Petro proposed opening drug treatment centres in Bogotá which would give users controlled doses of their drug of choice, Ordóñez gave another signature quote for the media to repeat endlessly, saying that Petro was “smoking the green stuff.”

He has crusaded against other liberal causes with equal enthusiasm. El Tiempo political cartoonist Matador found himself in a fight against Ordóñez when he tried to win his terminally ill father the right to commit assisted suicide, a case that again brought Ordóñez into the spotlight. The battle against gay marriage and gay adoption were two other causes celebres of the procurador, who made a point of telling judges that he considered homosexual marriage unconstitutional, and that reserving adoption rights exclusively for heterosexual couples was best for the “welfare of society.”

Given Ordóñez’s stances on the above issues, it should come as no surprise how he feels about the Constitutional Court expanding women’s abortion rights under three conditions (rape, malformed fetus, and risk to the mother’s health): “… we are using desire as the source for rights,” he claimed.

If all the previously mentioned politicians being investigated make it to the 2018 presidential campaign, one of the major political movements without an obvious representative would be Uribe’s Centro Democratico. Although Uribe has made overtures to both Vargas and Fajardo, Alejandro Ordóñez might be the most natural fit for his political movement, considering that Uribe and the procurador have been the most consistent high-profile critics of the peace talks.

The chances of a possible Uribe-Ordóñez political alliance likely depend on the success, or lack thereof, of the peace talks.  A recent poll showed that almost 70% of Colombians believe that negotiation is the way to end the conflict, with only about 30% believing a military solution is preferable. However, at the end of June, during one of the bloodiest stretches of the armed conflict in recent memory, support for both options was roughly equal. A successful Ordóñez presidential run, then, would require a drastic regression to the dark days of violence in Colombia, and could lead to an equally drastic regression in human rights.