Daniel Steel speaks with Raúl Sánchez, the first Colombian lawyer to serve in the International Criminal Court (ICC), and finds out more about why he became a lawyer, as well as the functions of the ICC and the role they will have to play in any post-conflict scenario

As the peace process delegates in Havana grapple with the thorny issue of impunity, their discussions will not only be framed by Colombian law and the Colombian people, but also by international law.

That’s why organisations like the International Criminal Court are so important. And it’s where people like Raúl Sánchez – the first Colombian lawyer to serve in the ICC and one of only seven from Latin America – come in.

Studied law at La Universidad del Rosario, where he is now a professor. He then won a scholarship to study Criminal Procedural Law at Rosario before finally studying a Master’s in Crime Deviance and Control at the London School of Economics in 2002. His experience reaches beyond the realms of education, having worked as an advisor to the Minister of Justice from 1999-2001. He also represented Colombia before the preparatory commissions for ICC at the UN and before the Organisation of American States.

As the son of a Judge of the Superior Court of Huila, and with two siblings who are also lawyers, it is not difficult to see how Sánchez ended up in law. In his own words: “I thought I could contribute to social justice and to society through law”.

His new role at the ICC gives him the chance to do just that – and his enthusiasm is contagious.

An accomplished professor, he has written eight books and published many papers. He tells me that his first major foray into international criminal law was when “one of my papers was quoted by the Peruvian Supreme Court to convict former president Alberto Fujimori.” He adds: “It was an honour for me to see the sentence against him and to read my paper quoted in this conviction”. Ex-president Fujimori is currently serving a 25-year sentence for crimes against humanity.

When probed as to whether he is worried about any potential consequences of serving in the ICC, he smiles: “In Colombia it is not easy to be the representative of a victim of a crime or a representative of someone who is accused of committing a crime. Criminal law practice itself is a risk, but of course so far I can handle it.

“I don’t know what would happen if I had a critical case before the ICC, but it is a variable I have to study in the future”.  He adds: “If you act like an ethical lawyer with principles based on the truth I don’t think you have to be exposed to anything strange”.

The ICC and the peace process

An important rule for the ICC in deciding whether they have jurisdiction over a specific case is the “complementarity principle”. This means “that the states have the main function to prosecute these criminals; it is only when they are not willing or able the ICC intervenes”.

The ICC is currently collecting information to help direct Colombia on which cases it should eventually prosecute, so that the ICC doesn’t need to step in.

Sánchez gives an example: “The last two reports about the Colombian situation, say the same related to sexual crimes: Colombia, please investigate sexual crimes. They have been very strong with this advice.”

Related – Colombia and the International Criminal Court: Time for a rethink?

The animated lawyer has written extensively about the complexities of transitional justice. “Transitional justice, the name means a transition from war to peace. There is always a discussion between the models of criminal justice, punishment at any price or to establish other parameters in order to grant justice and of course to obtain peace”.

For example: “For a mother who has lost her son and her son has disappeared, it is much more important to know the whereabouts of her son than to know the main leader is in prison for 40 years”.

The question of whether the ICC would act if the Colombian government granted immunity and did not prosecute is an ongoing academic discussion amongst ICC lawyers. “Half of the academics say there is no problem and half say there is a problem.” Sánchez adds, “However, if the Colombian government grants any kind of amnesty or judicial pardons or something like that it has to be accompanied by mechanisms of transitional justice”.

Thus it seems the debate is really about the definition of a state not acting. It is quite possible that Colombia could claim to satisfy the ICC’s requirement to act through mechanisms of transitional and reparative justice instead of punitive criminal justice: “For the ICC the important thing is not jail, it is justice.”

For Sánchez, reparative justice is far more important. “A victim of financial crime, what does the person want? The money back. They don’t obtain anything from a conviction of 30 years”. With that example, Sánchez clearly lays out what he believes is the path to peace in Colombia.

What is the ICC?

The ICC is a supranational entity, formed in July 2002 to prosecute crimes against humanity, war crimes, genocide and crimes of aggression.

One hundred and twenty countries have signed up to the Rome Treaty on which the ICC is founded. However, Sánchez points out, “If a state or country is not a member – for example Russia, the USA and China – the ICC can’t exercise its jurisdiction there.”

They have launched investigations in countries like Uganda, Sudan and Kenya. Their first conviction was Thomas Lubanga Dyilo from the Democratic Republic of the Congo, who was found guilty of the war crime of ‘conscripting and enlisting children under the age of fifteen years and using them to participate actively in hostilities.’

There are three ways that a case can arrive at the ICC: “First, when the general prosecutor of the ICC decides to investigate a case or situation. Second, when the security council of the UN refers a case before the ICC. And the third possibility, when a state decides to send information so that the prosecutor can investigate”. It is this third possibility that applies to Colombia at the moment, as it is currently in discussion with the ICC’s general prosecutor.

Currently, Sánchez’s biggest dream, like that of any ICC lawyer, is to have his own case. I ask whether it might be a conflict of interest to hold a case from one’s own country? “Not at all, the way it works is that first the ICC’s registry office shows the accused or the victims the list of lawyers and they decide whether to accept that lawyer or not”. He explains: “The accused usually accept the lawyer, someone who has the same language, the country etc.” 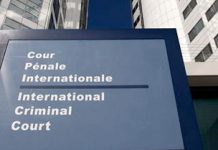 Colombia and the International Criminal Court: Time for a rethink?