‘Visceral’ is an adjective frequently used in cinema to refer to scenes of a gory, intestine-squelching nature rather than those moments of raw, primal emotion which it also evokes. However, director Alejandro G. Iñárritu meets the definition of the word on both accounts in his gut-wrenchingly brutal new drama, The Revenant.

Based on a true story, The Revenant sees Leonardo DiCaprio go into full survival mode as Hugh Glass, an early 19th century fur trapper, who is brutally attacked by a bear during a hunting expedition in the winter wilderness, then left for dead by members of his own party. Spurred on by grief and revenge, those basest of human emotions, Glass sets out on a survival odyssey to track down John Fitzgerald, the man who horribly betrayed him, and seek retribution.

Described by some cast members as “a living hell,”  The Revenant is a film which clearly revels in its authenticity. DiCaprio gives a fiercely committed performance throughout the movie’s lengthy run-time: he jumps into icy waters, eats bison liver and spends a freezing cold night in an animal carcass for warmth all in the name of survival and a tilt at that elusive best actor Oscar. The now infamous bear-mauling scene (no, DiCaprio doesn’t get raped, contrary to media reports) not only raises the bar for digital effects, but also fully immerses the viewer in a horrifying situation of primal fear and brutal violence.

Cinematographer Emmanuel Lubezki relies solely on natural lighting to conjure up breathtakingly beautiful imagery of the remote North American wilderness, while Iñárritu stages a number of technically outstanding long takes reminiscent of his previous picture, the Oscar-winning Birdman. Indeed, the film’s undeniable technical brilliance and stunning cinematography more than compensates for such a thin plot (man seeks revenge) with a strong supporting cast led by Tom Hardy – who chews through his latest over-the-top accent with malevolent glee as the Texan John Fitzgerald.

This is an unapologetically masculine movie (the mother grizzly bear is perhaps the only memorable female role) with a weighty earnestness and pretensions to a Terence Malick-like spirituality that may prove a little off-putting for some. However, as a painfully immersive and cinematic experience, it’s hard to fault. A repeat performance of last year’s Oscar triumph quite possibly beckons for Iñárritu and co. 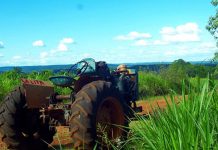