Home Colombia The writing’s on the wall

In his latest column, Gerald Barr wonders what’s in a name as he ponders the incarnations – and reincarnations – of Colombia’s armed groups, particularly the AGC or Clan del Golfo.

Driving through a town on the Colombian coast I see the letters AGC, which stands for the Autodefensas Gaitanistas de Colombia, spray-painted on a white-washed wall. Oh no, here we go again, I think. Just as one of the country’s long-standing armed-group acronyms, the FARC, or Fuerzas Armadas Revolucionarias de Colombia, is being consigned to the dustbin of history (some might say ‘recycle bin’), another one has popped up to fill both the territorial void and that empty space on the wall. The paint is the literary equivalent of a dog peeing on a lamppost: Here I am. Watch out.

Not that the AGC is that new. It has been around for several years, and descends from a much longer line of outlaw groups that are al margen de la ley, as they say in Colombia. But the AGC moniker seems to be spreading, and I recently saw it sprayed in towns all along the Caribbean coast.

This marking of territory seems particularly strong in Colombia’s tangled conflicts. Over the years I have seen hundreds of tags by different armed groups, usually on walls and roadside structures, but also on cars, trucks and vans daubed with (usually) ELN or FARC after being held up at a guerrilla roadblock. Once, many years back, I even saw the acronym AUC (Autodefensas Unidas de Colombia) painted in the blood of its victims.

Before that, rather naïvely, I often wondered why this graffiti would stick around for so long. “Why doesn’t the owner just paint over it?” I asked a Colombian colleague as we bought an ice-cream at a shop with FARC-EP sprayed across the front. “Would you?” he shot back. He had a point. It was well known that the army would patrol the town by day, but the guerrillas owned the night. Meanwhile the paramilitary groups were waiting in the wings to swoop in for a massacre of any supposed FARC sympathisers. That was one good reason not to have FARC-EP written on your house. But could you risk taking it off?

This brought home to me the problem facing communities in the conflict areas. There is rarely a ‘front line’ in the Colombian conflict, but rather a patchwork of zones, like medieval fiefdoms lorded over by one militia or another, with shifting boundaries and allegiances. For the settled population this poses a constant headache of who to pay off, who to proffer support to, who to agree with, and whose initials to scrub off your front wall. One mistake could be fatal.

There is also the irony that, while happy to spray-paint their presence on walls, in person the armed groups could be coy about who they actually were, and combatants could cross-dress as a ruse to see who really supports them. In one area I often passed through, guerrillas would pretend to be paramilitaries (and vice-versa), and off the main roads you could stumble across a unit of Colombian army’s ‘irregular’ Contra-Guerrilla units looking like extras from Full Metal Jacket. For campesinos living here, constantly being harassed for both favours and information by camouflage-clad people with guns, it was a nightmare knowing what to say to who. This explains the general reluctance in rural Colombia for people to say anything at all.

And forget about political pigeon-holing. Readers of Isabel Allende might crave a simplified Cold War scenario of swarthy freedom fighters fighting right-wing dictators, but in Colombia things are much more up in the air, with unholy alliances constantly being forged and then broken. In recent years both news reports and commentary from those on the ground have highlighted instances of the Colombian army working with ELN against the FARC, who themselves have forged practical and business alliances with the neo-paramilitary groups.

Perhaps this realpolitik is best summed up by the progression of members of the Marxist-Leninist EPL (Ejercito Popular de Liberación). In the 1990s, their forces melted into the right-wing paramilitary groups such as the ACCU (Autodefensas Campesinas de Córdoba y Urabá). The ACCU then grew into the nationwide paramilitary group AUC (Autodefensas Unidas de Colombia), members of which supposedly laid down their guns in a peace process in 2004. However, many then joined the BACRIM (Bandas Criminales) in a nueva generación of para-like gangs. After years of internecine wars, the feared Urabeños were formed. The Colombian government insisted on calling them Clan Úsuga so as not to stigmatise people from the Gulf of Urabá coastal region of Colombia, but then changed this to the Clan del Golfo so as not to stigmatise the 20,000 Colombians with the name Úsuga! Meanwhile, the group itself rebranded as the AGC, Autodenfensas Gaitanistas de Colombia, invoking the name of the assassinated liberal leader Jorge Eliécer Gaitán and now, according to their website, do social work helping “old people and mothers in the community”.

So hopefully that’s as clear as mud. But in case you were worried the original EPL was defunct, it has now popped up like a bad penny in the north-east of Colombia where it organises cocaine production in Norte de Santander. Meanwhile, the AGC is trying to inhabit areas left by the FARC, and not just the physical spaces – vast areas of jungle and mountains where state presence is limited – but also the political landscape as their communiques tell us they are “fighting for social justice”.

In fact much of their literature parrots the left-wing guerrilla groups, not least ending  communiques ‘From the Mountains of Colombia’, the favoured sign-off of the FARC and ELN. They are also now organised into frentes, bloques and an Estado Mayor with uniformed troops (complete with epaulettes!). And of course the AGC want their own peace process, something the government has, until now, roundly rejected and most Colombians would find hard to stomach, given the group’s reputation for drug trafficking, extortion rackets, assassinating campesinos, abusing land rights and harassing community leaders, and the fact that many of the combatants have supposedly already ‘demobilised’ once before.

The massive demobilisation of the AUC paramilitary forces in 2004 is now widely seen in hindsight as a sham, with drug barons ‘buying’ posts as AUC commanders to win reduced sentences (while some of the genuine commanders were shipped off to jails in the US to muzzle their links to politicians); groups of farmers paid to pose as combatants and old rusty pistols and shotguns turned in while the real weapons were siphoned off back to the drug gangs.

Ironically, the AGC blames this ‘failed demobilisation’ from 12 years ago on their current existence; rank and file paramilitaries who laid down their guns were then ruthlessly killed off by death squads, forcing the survivors into the arms of the drug gangs.

There is a grain of truth in this. The murder rate in Córdoba, the home of many ex-paramilitaries, went through the roof in the years after the AUC was disbanded in 2004. Dark forces (and not the FARC or ELN) were “killing off any living links between the paras and the politicians”, someone who lived in Montería (the region’s capital) told me at the time. If this is true then maybe some former AUC were forced to take up arms again in a similar way that many FARC guerrillas joined the ranks to escape persecution, a survival strategy rather than a criminal calling.

It is a core claim by the current AGC who say that many demobilised paramilitaries were assassinated or unable to go back to their homes, the hidden reality being that the “state with its costly security apparatus are incapable to give the necessary protection… to the demobilised”. It is certainly an alarm call for the current peace process and imminent demobilisation of the FARC, some of whose guerrillas are already reported to have filtered into the ranks of the AGC rather than face the uncertain future of life without guns.

Meanwhile the Colombian government continues to insist on calling them Clan del Golfo, even though rumours suggest they may be softening their position. This clearly riles the AGC who point out – perhaps counterproductively – that their ‘activities’ extend far beyond the coast, and they have used the initials AGC since 2008. “We are weary of the creative titles…we are and will continue to be the Autodefensas Gaitanistas de Colombia” they write in one editorial entitled ‘What’s in a Name?’.

It is unlikely the neo-paramilitary group will smell sweeter with the acronym AGC, but it might bestow a thin veneer of political objective to their existence. Which is of course why the government refuses to use it, added to a reluctance to besmirch the name of Jorge Eliécer Gaitán, one of Colombia’s most revered political figures.

In Colombia though, things can change. Recent rumours suggest the state is in secret talks with the AGC, Urabeños, Clan Úsuga or Clan del Golfo, however you choose to call them. The first official sign might be wider recognition of the acronym AGC. For now, the writing’s on the wall. 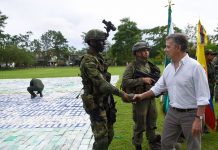 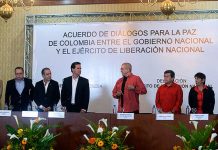 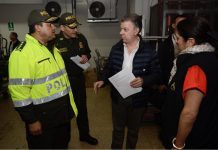