Home Business The thorn in Ecopetrol’s side

Costs of the Reficar refinery expansion project in Cartagena have skyrocketed to more than double the original estimates, sparking national outrage

The ambitious construction programme at Reficar, Colombia’s largest oil refinery, was initially budgeted at USD$3.89 billion, but it looks like the final bill will be over USD$8 billion – or 3.4% of the country’s GDP.

Damagingly at such a delicate time for Colombia’s economy, the extra costs mean that other developments – such as the modernisation of the Barrancabermeja refinery – have now been put on hold.

Reficar is a subsidiary of Ecopetrol, Colombia’s state owned oil company, which just announced losses of COP$6.3 trillion pesos (USD$2 billion) in 2015 versus a COP$2.49 trillion peso loss in 2014. Ecopetrol’s woes have mainly been caused by oil prices dropping from over USD$100 per barrel in mid-2014 to less than USD$40 by the end of last year, though El Niño, attacks on oil infrastructure and the ongoing issues on the Venezuelan border have not helped.

Rating agency Moody’s downgraded the company to Baa3 in January, the lowest rung on the investment-grade ladder, citing lower cash generation and higher leverage and pointing out that this would “hurt the company’s ability to continue with its capital spending program”.

Described as “one of the largest industrial projects ever undertaken in Colombia” in a 2010 release from the company, the Reficar expansion project was supposed to create the most modern refinery in Latin America. When work began in 2006, the plan was to more than double their processing capacity of 80,000 barrels per day by the end of 2015. The company say the refinery is now up to 110,000 barrels per day and will hit the target of 165,000 in June 2016.

Juan Carlos Echeverry, the former finance minister who now runs Ecopetrol, has said that Reficar will be able to start servicing its debts in 2017, and told reporters that it would be “heroic” if the refinery managed to turn a profit by 2018.

Reyes Reinoso Yánez, president of the refinery told El Pais that the balance of the debt owed to international banks for the refinery project is USD$3 billion, which is payable over the next 11 years.

“The balance of loans with the Ecopetrol Business Group is USD$2 billion,” he said. “The project is profitable, […] by 2028 the entire debt will be paid.”

The refinery may well make money in the future, but Ecopetrol is still forking out a significant chunk of its budget for Reficar in the year ahead. Many are calling the massive overruns the greatest financial scandal in the country’s history. They want to know how it was allowed to happen and question whether it was down to poor planning, negligence or corruption.

Ecopetrol lay the blame squarely at the feet of the US-Dutch contractor, Chicago Bridge & Iron Company (CB&I). They told a press conference in February that they are trying to get some of the money back, and that they plan to take the CB&I to an international tribunal if direct talks do not bear fruits.

Officials say they made a decision to wait until the project was reaching its close to avoid paralysing the development.

However, these answers have done little to appease the critics.

In a weekly column, Senator Horacio Serpa called for action to understand what happened and to identify the “thugs” responsible for “looting a major brand”. He said, “They stole, they robbed without consideration, they bled it financially until they left it on the verge of collapse.”

He also questions Echeverry’s actions, pointing out that the costs have risen by a further USD$4 billion since he took over as CEO.

The procurador, in charge of keeping public servants in check, has two investigations under way. One was started in 2012 when the first allegations of mismanagement surfaced, and another was opened in February into the delays and the scope of people’s responsibility, including Echeverry and current finance minister Mauricio Cárdenas.

He wants to establish what knowledge various ministers and members of the board had, and to focus on the way that extra financing for the project was sourced.

Earlier this year, the comptroller published its report from an investigation that began in 2015. It has now opened two more specific investigations into the control of engineering, procurement, and construction in the project.

The comptroller’s report showed that construction costs went USD$2.328 billion over budget and that recruitment and expenses had come in at USD1.265 billion more than planned. There were additional costs caused by the delayed delivery of the work: the refinery should have been in action – and making money – since late last year.

All of the officials involved deny any wrongdoing. President Santos and Minister Cárdenas blame a mixture of market conditions and poor planning.

Speaking at the opening of the port of Mamonal, Santos said: “The problem of Reficar, this whole scandal that has been created, is directly to do with this habit we Colombians used to have of starting construction projects without structuring them properly”.

He explained that work had begun after only about 20% of the necessary studies were completed, and that as work progressed they realised they had to pay more.

His sentiments were echoed by Jorge Alberto Marín, vice president of the Colombian Chamber of Commerce at a forum organised by Semana. He said that Colombia suffered from an institutional disability – with problems of planning and a lack of vision.

“What happened at Reficar is the combination of many factors: incomplete engineering; lack of control of the contractor CB&I; and the way the reimbursable expenses were contracted, which increased the risks”, said Marín.

While mismanagement may be more innocent than embezzlement, this “institutional disability” still raises questions for those looking to do business in Colombia – in particular with the public sector.

The president said that what had happened in Reficar happened in many public works in Colombia, and that’s why congress had approved a law to oblige companies to structure their developments properly.

Santos took the opportunity to call for a revolution – in roads and in infrastructure – to make the country competitive. With external conditions hitting the Colombian economy hard, it is certainly true that the country could do without creating even more problems itself.

Order and control in Bogotopia 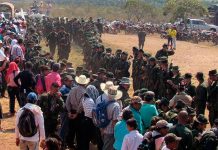