Father of the TransMilenio, Mayor Peñalosa, has decided on an elevated metro to complement the overworked mass transit system and relieve it of some pressure. Gerald Barr looks at the history of the system and takes his kids on an adventure.

This mass ingratitude may be because people can’t remember what commuting was like before the TransMilenio. Back in the 90s, 20,000 smoky buses blocked every inch of the city’s roadways while their unsalaried drivers engaged in a Mad Max fracas for fares. Not only were journey times incredibly long – as someone put it, commuting meant “you had to get up before you went to bed” – but the accidents caused by buses scrabbling to collect passengers actually killed hundreds. In 1983 there were 36 mass-fatality crashes on public transport, mostly blamed on bad driving. Every year more than 50% of buses had some kind of crash. This shambles was called la Guerra del Centavo, the Penny War.

So when the city’s leaders planned the network of exclusive bus lanes in 1998 and baptised it the TransMilenio (it rolled into action in the last month of 2000) those red bendy buses were welcomed like conquering heroes. At first, the TM was seen as a huge success, bringing real social change. Three-hour commutes were cut to 50 minutes. People in the poorest barrios, which tend to lie on the outskirts, could find work in more central districts. Maids no longer needed to live with their estrato seis employers and could commute from their own flats in Ciudad Bolívar. Of course the estrato seis employers would never use the bus anyway but, hey, they could now convert the maid’s room into a large extra cupboard. Everybody won.

So what went wrong?

More people, for a start. Bogotá grew from six million inhabitants when the TM was first planned to nearly nine million today, and TM passenger rides also increased from 800,000 per day in 2001 to the current 2.5 million. Admittedly, there has also been a corresponding increase in routes (now totalling 120 kilometres), stations (currently at 138) and TM buses (over 2,000) – but not enough to keep up with demand. At peak hours the network is stuffed to capacity.

The TM had overcrowding factored in from the start. Buses were planned for six passengers standing per square metre, more than double the standard used in Europe. This offers higher profits (more fares per journey) but not higher efficiency as people struggle to get on and off at already-saturated stations. Starting at maximum ‘crush load’, the human jam gets even denser since there is no control of passenger numbers at peak hours (around 7am and 5pm) when people cram on until buses are filled to a sweaty 14 passengers per square metre. Worse still, the station and bus entrances are also the exits so the human herds are forced back on themselves like trapped wildebeest.

So perhaps it is not surprising that today no one has a good word for the TM. Users hate it for the crush, the crime, the thousands of colados (passengers who enter the system without paying) and the feeling that the commercial operators of the system are ripping them off. Car owners hate it because it robs four precious driving lanes. Environmentalists hate it because the buses belch black smoke.

And some people hate it most because it is not an underground. There is lingering resentment in the city that those bendy buses and stations with stuck doors have robbed the city of a gleaming electric subterranean railway.

In fact, the TM was always planned as a ‘complementary system’ to a subway. Since the 1940s citizens have been tantalised by the prospect of this mythical metro with every incoming city mayor ordering expensive ‘technical studies,’ making major announcements of ‘the final plans’ but never finding enough cash or willpower to dig the first hole. This riles many rolos. “Even Caracas has a subway”, vents a friend in exasperation, expressing his sum of all fears that Venezuela does something better than Colombia.

This failure is partly related to Bogotá’s history of electing mayors politically opposed to the ruling party, hence the money tap being turned off. Then there were dodgy mayors like Samuel Moreno who, in 2010, promised a working metro ‘in five years’ before being jailed for corruption.

It looked like the deadlock might be broken in 2015 when President Santos handed over a ‘symbolic’ cheque to Mayor Petro for his latest underground plan. Then – whoops! – along came Enrique Peñalosa in 2016 to bury the whole subway idea altogether.

According to Peñalosa, digging tunnels is simply too costly. Instead he is proposing a cheaper, Medellín-style raised railway. Of course not everyone is happy with scrapping the subway, not least those who might continue to get large sums for planning it. But then again Peñalosa has some authority here: he was the mayor who pushed through the TransMilenio back in 1998. He also says that a new metro raised 12 metres above road level will be 70% less costly than digging tunnels. Platforms will be accessed from skyways linked to stations set in commercial buildings, tying into his master plan to turn the city into one giant shopping centre.

But will it get off the ground? Probably, if Peñalosa’s track record is anything to go by. Will Bogotá be happy? Unlikely. Some people will still yearn for an underground. Paris, London, New York, Caracas all have one, so why not Bogotá?

But many rolos, especially those living in the poorer neighbourhoods of Kennedy (which sensibly, the metro is planned to serve first), won’t give a toss if the rails are up, under or inside out, as long as it gets built and they can get where they want to go reasonably fast without being crushed breathless. Time to transcend the TM.

A day out to the south side

One advantage of overground transport is that “passengers can enjoy the scenery,” said Bogotá’s mayor Enrique Peñalosa while announcing his new plans for an elevated metro. This comment caused some merriment among my friends who commute sardine-like on the TransMilenio.

“Qué tontería, the only view I ever get is directly into someone’s armpit,” says one. Politicians “go by bullet-proof car and never ride the buses,” adds another.

Nevertheless, the idea of mass-transit tourism tickles my imagination. I decide to put it to the test with the kids. How much of the city can we see outside of peak hours? My friends warn me of the dangers in some areas. The general advice is: don’t take any valuables, as little money as possible, sit at the front close to the driver.

We set off clutching our Tullave cards that open the turnstiles on the TM stations. We start close to Portal del Norte, the busiest station, and just the walk over the footbridge gives exhilarating views of 14 lanes of moving metal backed by skyscrapers and lush green mountains. This is Bogotá at its best: urban grit mixed with primal nature. Blade Runner meets The Emerald Forest.

Soon after, we sit and watch the glass canyons of Avenida El Dorado roll by. It’s an articulated bus so the kids go back to the concertina-link to try some bus surfing, but after a near wipe-out braking at a station they go back to their high seats which offer a great view. Sitting near the front we can see the road ahead and take photos.

Near the airport we alight to change to an express bus to San Mateo, perhaps the furthest point on the network. I check the station for route information. Surprisingly, there is no map at all but rather an incomprehensible colour-coded list of routes which I stare at dumbstruck while several buses arrive and leave.

“Dad, it’s here, the G43, just get on,” says my daughter. Now we are sitting at the back of the bus, a security lapse, but no one looks dangerous. Various characters get up selling chocolate bars, playing rap music or relating some hard luck story. Luckily, I have a good supply of small coins.

Now we are coasting over flyovers with amazing views of the south of the city with vast barrios covering the hills. It’s where most people live, but for us it might as well have been the dark side of the moon. “Are we still in Bogotá?” asks my son, awestruck by the scale of the city. We are technically leaving Bogotá and entering Soacha in Cundinamarca, though in reality, it’s one drab continuum. In little over one hour we have travelled from the furthest north to the furthest south of the conurbation, including a detour west almost to the airport.

We arrive at San Mateo terminus, all new gleaming steel like an airport, with neatly parked feeder buses and a huge secure bike park. Next door are not just one but two massive shopping and cinema complexes, but every square inch of the nearby hillside is packed with the breeze block houses of Cazucá and Ciudad Bolívar. It’s weird, eating in a fancy food plaza looking through a massive plate glass window over Bogotá’s poorest communities.

Back on the TransMilenio we head north for Suba, at the network’s northwesternmost corner, but a message-board catches my eye: Suba line closed because of protests. And now in the late afternoon the bus seats are full, we can no longer even see the windows, and the kids are looking tired. At every station more people get on and the press gets stronger, no space for bus-surfing now. Time to quit. After another fifteen minutes of discomfort we approach our final station, but a solid mass of bodies is blocking our exit, and the station seems equally full. I brief the kids: “When I say move, just keep as close as you can and don’t let go.”

The bus rolls to a stop and I start shouldering my way to the door – “con permiso, con permiso” – with four little hands clutching my jacket. No one moves and people from the station start pushing on. I keep trying to move out but nothing gives, everyone is in a glassy-eyed torpor. This is the real trouble with the TransMilenio, not being squashed, or late, or even robbed, but the daily attrition of small dehumanising acts of soul-crushing indifference.

Then panic sets in. What if I escape the zombie horde but my offspring are dragged down to some grey commuting underworld? Then the kids see a gap and we tumble out onto the station. “That was so cool,” says my beaming daughter. The whole trip was a huge adventure. Just avoid the peak hours. 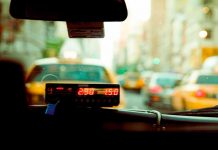 Tildes got you stressed out?