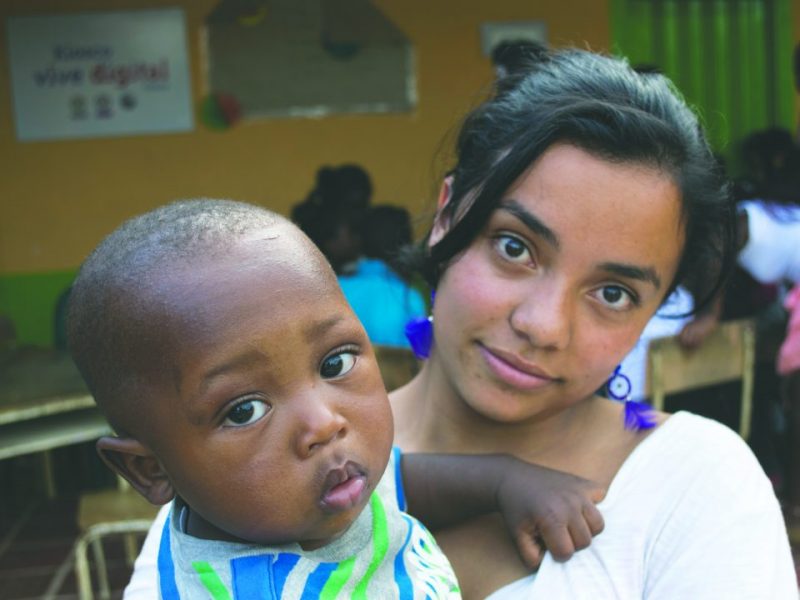 Sandra from Bogotá’s Casa Taller project looks after some of Yolombó’s youngest.

Sam Ling Gibson witnesses first hand the challenges faced by communities in Cauca, where being neutral can be deadly

Late in 2015, on the eve of our trip, we received news that didn’t bode well: there had been a ‘battle’ between the guerrillas and the army in the school of the indigenous community where we were going to be staying. Sadly, it didn’t come as a surprise. Situated in Cauca, which is frequently cited as the most conflict-ridden department of Colombia, much of the region sees the worst of the country’s internal conflict.

The plan was to travel there with 26 young Colombians from Casa Taller – a community project where I’ve been involved teaching carpentry for the last few years. The initiative, based in the marginal area of San Luis (de la Calera) in Bogotá, works with more than 100 young people, adults and older members of the community who come to contribute to a sense of service, solidarity, and autonomy through a plethora of skills and activities including music, cooking, arts, and permaculture. Casa Taller started as a reaction to the lack of choices for children and young people in San Luis, an area which has been completely neglected by the state.

The escuela viajera (travelling school) is just one part of this initiative. It’s an annual trip with a philosophy of cultural exchange and awareness, encouraging the group to live in the shoes of others.

The ‘others’, in this case, started with NOMADESC– an indigenous and campesino advocacy group. While indigenous groups are guaranteed rights to land, education, and political participation in the constitution, these rights often exist more on paper than in reality. Weak or non-existent state presence often leaves the groups at the mercy of non-state armed actors.

NOMADESC gives a voice to disparate groups which have historically had very little representation and suffered disproportionately as pawns in Colombia’s decades-long civil war. We would stay several days with two of these communities.

The first of these was a Malaveres campesino cooperative, located in an area where coca production is lucrative, and therefore commonplace. The community took the collective decision some years ago to abandon the coca industry, favouring organic coffee and cocoa production instead. This decision wasn’t easy, especially as it resulted in threats and ‘disappearances’ that continue to this day. Commendably however, the consensus was that the move away from drugs was the only truly sustainable way forward.

We were received with generous hospitality, and in true Casa Taller style, worked within the community, learning and teaching in equal measures over the next few days. We cooked together (sancocho, arepas, and of course plenty of fresh coffee), worked together and even found time to play a football tournament with the locals (which we lost).

I chatted to Juan, the community leader, as we applied organic fertiliser (honey-based) to the surrounding coffee fields. He explained their reasoning for favouring the organic approach.

Despite being regarded as the best in the world, Colombia is actually importing more coffee than ever, made easier as a result of the 2012 Free Trade Agreement with the US. Juan feels that the nation’s coffee industry has received declining support from the state, and that with increasing competition from the mechanised, low-grade coffee from Brazil and south east Asia, Colombia cannot compete with such industrialised processes.

The Malaveres community, who have also come under pressure to buy into Monsanto’s seed and fertiliser monopoly, have decided that quality, not quantity is the way to go. Juan says, “For a real future for the farmers, organic is the only way.”

Conflict and globalisation have made their mark on our second destination, Yolombó, too.

Our cultural exchange continued as we bonded over work, food and dancing. I learnt how to make patacones. We were shown mapalé and the Afro-Colombian take on salsa: salsa choque. I knew I would be dragged up to dance and so hammered down the local spirit viche con miel before the inevitable…“you just need to move your hips more”!

The area around the community is gold-rich (yet another driver to the conflict here), and each family has ancestral rights to a small patch of land that they mine, painstakingly, by hand. After only half an hour of slogging with a pick-axe in 35 degree heat I was exhausted!

I heard more about the challenges that face my new dance partners over some papaya as we cooled off together in the river. Multinational companies and armed groups on both sides of the conflict all want a slice of the pie.

Mechanised diggers and high quantities of toxic chemicals mean it takes these groups just four days to mine the same area that the families I met mine in a whole year. The use of threats and violence are both common and real. The community leader is forced to live in hiding elsewhere in the country.

The stories we heard really drove home the reality of what we had also seen with the coffee growers in Malaveres: the conflict is so divisive and polarising that for these communities, and many like them, even trying to be neutral is dangerous.

As for the Casa Taller group, I can honestly say it was transformative for the kids, and it opened their eyes to how other people live, especially in the face of such adversity. For them – and me – it was both educational and inspirational and they returned to Bogotá with a renewed energy about projects in and around their neighbourhoods. Many of the children commented that their experience really helped to put things into perspective and made them realise that there are always people with greater struggles than their own.

Cauca is in many ways a microcosm of Colombia – happy, resilient, beautiful and hospitable, yet simultaneously violent and hard, at the whim of various armed groups looking for a fast buck by any means.

The positives are evident everywhere you look in the country. But it is sometimes easier to put the negatives and the reality of the conflict to the back of your mind, especially in the artificial tranquillity of parts of Bogotá. It is seductive to be in the capital and ignore the reality of the conflict. But when you step out of the city, the naivety of this way of thinking becomes obvious.

Not only that, but it also brings home the potential difference that the peace deal could make to these communities – and the importance of the subsequent enforcement and policing of the agreement. The people that we met, worked with, danced with and cooked with have been at the whim of often violent and powerful groups for too long. The looming peace deal in Havana is only the first step towards changing this.

At Casa Taller we can always use more volunteers – whatever your talents! If you’re curious you can contact the author directly at [email protected]. You can buy the organic coffee produced in Malaveres by the TINAMU cooperative here in Bogotá; Cada Loco con su Tema, Calle 67 #4a-41. 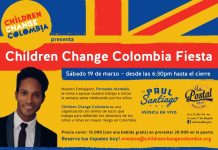