Vigilante justice is responsible for one death every three days in Bogotá. As the latest viral video sparked both support and outrage, Laura Sharkey asks what it means for society.

It was an ordinary Wednesday evening in March this year. Claudia did not notice anything strange or threatening until a man approached her in Chapinero and in a split second, grabbed her bag, leaving her shocked and motionless. She may not have had time to react, but the seven people surrounding her did. They chased the robber down the street and attacked him. He surrendered the bag but they continued to kick and punch him until blood stained the pavement and his cries could be heard a block away.

Last month, a video that quickly went viral showed a woman physically and verbally abuse a young man who had attempted to rob her. She forced him to strip and leave the scene naked, haranguing him in front of about 20 bystanders.

The strong online reactions on both sides reflect public sentiment on the issue. Supporters called for “more women like this”, sent applauding emoticons and suggested that there should be a monument erected to her in the Parque Nacional. Others were outraged – particularly as the young man may have been a minor. They asked if it would be the same if a man had done that to a woman. One person, commenting on the YouTube video said: “She should be prosecuted for humiliation, torture, cruel and degrading treatment, theft, personal injury, threat, violation of moral dignity that every human being deserves – on top of that he did not actually steal anything.”

This case highlights another aspect of vigilantism: in many cases the incidents are being recorded, meaning that alleged criminals are being humiliated and tried on social media before they even get close to the legal system.

According to a study by the Universidad Nacional, released in March, over 140 people were killed by lynchings in Bogotá between June 2014 and June 2015. That’s one death every three days. A further 600 were rescued by police. This study, the first of its kind in Colombia, analysed reports from various official authorities to generate concrete figures on a phenomenon that experts believe is on the rise across the country.

In its simplest form, vigilantism is an attempt to act in the capacity of a law enforcement agency (often by punishing criminals) without having the legal authority to do so. Vigilante justice is seen by some as an appropriate response justified by the anger towards those committing a crime. This is one of the concerns raised by Professor Rosembert Ariza, who headed the study. “In the lynchings, the defence of sacred private property is more important than the defence of life,” he told El Espectador.

He suggests that these acts of aggression reflect an anger in society that has built up over time, making those who have been attacked into scapegoats for an accumulated hatred. This idea is in line with those who suggest that the conflict in Colombia has shaped the way in which we see such acts of violence. In this vein, after 50 years of conflict with guerrilla organisations, when some citizens who have been exposed to the conflict (either directly or indirectly) are in the rare position of having superiority against an aggressor, a violent reaction is almost instinctive.

So, what else is driving these incidents? A 2015 study by Fundacion Paz y Reconciliation names a number of main triggers for informal justice:

Lack of confidence in the justice system: It states that those who participate in such informal acts believe that the police will not take sufficient action and the perpetrator will not be prosecuted for their crime by traditional justice mechanisms, and thus should be punished by other means.

Perception of impunity: Finally, the perpetrators of lynchings are confident of their own impunity and feel that this justifies their behaviour.

The World Justice Project, which analyses and measures how the rule of law is experienced in 102 different countries puts Colombia close to the bottom in their rankings for both the Order and Security and Criminal Justice categories.

Political scientist and public policy analysis specialist, Carolina Contreras Ortega added two more factors to the list: the stimulation of violence through the media and the prevalence of carrying legal and illegal weapons.

She states that, “Far from being an effective mechanism of control, vigilante justice reproduces and increases levels of insecurity, adds threats to the physical well-being of people, and has serious implications for the legitimacy and popular acceptance of the state.” Despite this, a 2014 LAPOP study showed that almost a third of Colombians would either turn to, or accept this practice.

Much has been written as to why people are motivated to resort to informal justice, and analysts are now starting to comment on the impact it may have on society. By further weakening the role of law enforcement, they suggest it damages the very fabric of society.

As to whether it might decrease crime, surprisingly, according to a security expert consulted by The Bogotá Post, “criminals are actually unlikely to be deterred by violence against them, as many may have grown up in situations where violence is normal”. This is important since many cases of informal justice in the city do not lead to death, it means the threat of people taking the law into their own hands just becomes another threat to be managed while going about their business.

An increase in these types of informal justice could lead to criminals developing new techniques for committing crimes – for example, conducting faster robberies so that the victim/bystanders don’t have time to react, or committing crimes that won’t be observed by bystanders. If criminals are motivated to commit their crimes away from the public eye, there is a risk they will be more inclined to use even higher levels of violence, given the increased control that they have over their victims.

The Universidad Nacional report is a first step to understanding more about this phenomenon and the potential it could have for crime levels and criminal tactics in the city.

Contreras says there are many steps that need to be followed such as improving the credibility of state institutions, strengthening the role of local government and implementing educational programmes to discourage vigilante justice.

What is for sure is that the factors behind this eye-for-an-eye attitude have developed over a long period of time, and many will take even more time to solve. 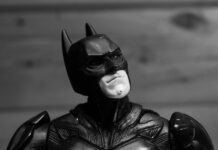 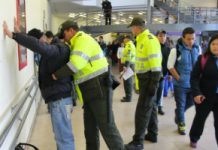 Bogotá to crack down on festive crime 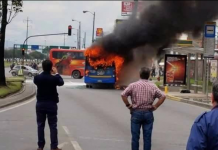