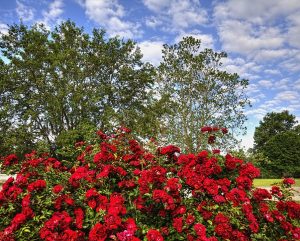 Where the cocaine industry once flourished, new and legitimate industries are now blooming. The Colombian rose industry has seen a massive spike over the past two decades, thanks in large part to a trade agreement concluded in 1991 between the United States and Colombia. In the process, the American rose industry has been all but wiped out, as consumers demanded mass-produced roses at a cheaper cost.

American growers simply cannot compete with the prices of Colombian rose production. The Colombian minimum wage sits around US$300 per month, or about $1.25 per hour, compared with $7.25 per hour in the United States.  The result is that almost all American flower growers have gone out of business.  This is in part due to George H.W. Bush’s attempt to incentivise Colombians away from the cocaine industry and towards more legitimate prospects, which came to fruition with the Andean Trade Preference Act of 1991. This act lifted all duties on exports from four Andean countries, including Colombia. Colombian roses were suddenly much cheaper to import, and over the next two decades, the Colombian rose industry exploded, as the cocaine industry diminished.

On the other side of the coin, Venezuelan immigrants fleeing despair in their home country have found economic refuge by working the massive rose farms just outside Bogotá, Colombia, where the 2,640m altitude and 12 hours of sunlight create the ideal conditions for rose-growing. The growing spectre of a dictatorship, along with hyperinflation, increasing street violence, and medical and food shortages, have caused at least 500,000 Venezuelans to seek safety in their westerly neighbor.

Many Colombians remember when their own country was racked by extreme violence between the government, communist rebels, and drug traffickers. Some feel that Colombians owe Venezuelans a debt, “We can’t ever forget the generosity of that country with Colombians,” Foreign Minister Maria Angela Holguin said to Reuters. “There are 4 million Colombians or children of Colombians in Venezuela, so we have to be big-hearted.” However, Venezuelans have also faced discrimination, as Colombians fear that they will lose their jobs to immigrants willing to work for a lower wage. For those who leave Venezuela, the almost $300 US dollars they will earn per month working in the Colombian rose industry is worth the possible discrimination. They would make a measly $2.25 per month exchanging their Venezuelan Bolivars for American dollars on the black market.

“I know Venezuelans want to return to our own country … It’s hard for all of us but we have to move forward,” Venezuelan rose-cutter Angy Velasco said to Reuters.

Over the last two decades, the rose industry, using flowers grown in Colombia, labour from Venezuela, and fueled by American consumerism, has provided a dynamic glimpse at the inner workings of global free trade, and the shifting economic tides that result from them.