In a landmark session, Congress has approved a referendum on anti-corruption measures that will mark the fourth time Colombians have been asked to go to the polls this year.

Tuesday, June 5 saw an unusual session of the Senate in which a citizen-driven anti-corruption bill was passed unanimously with 84 votes. The initiative, which was spearheaded by Claudia López and Angélica Lozano, will give the public the right to vote on seven individual proposals aimed at combating corruption.

“Corruption today is killing more people than the armed conflict, killing underprivileged children through hunger, killing young people who end up being recruited by illegal gangs because they do not have opportunities, killing underprivileged families through preventable diseases because they don’t have pipelines, killing old people who arrive at hospitals and are not treated because they have closed them due to corruption,” said López after the vote. The referendum is likely to take place in September and will give the public a chance to vote on anti-corruption proposals – such as lowering the salaries of congressmen – that have previously failed to get through Congress. President Santos has until June 13 to set the date for the referendum which must take place within the next three months.

The next challenge for the anti-corruption crusaders will be to get the requisite 12 million people to turn out to vote (over 19 million voted in the first round of the presidential elections.) Voters will be asked to agree or disagree individually to seven key measures, including efforts to make the bidding process for government projects more transparent, eliminating special treatment for officials accused of corruption, and public declarations of income from all politicians.

The seven measures that will be put to a referendum

Previous attempts to pass this type of anti-corruption legislation have failed eight times, which is why the campaigners resorted to a little-used law that allows citizens to push for this type of referendum. The Vence al Corrupto campaign collected 4.3 million signatures, which is the highest ever level of citizen support for this type of bill.

“Corruption is the main problem in Colombia today, we have no doubt about that,” said López. Indeed, data gathered by Transparency International in 2017 put the bribery rate (how often a bribe is necessary to resolve a bureaucratic or official situation) here at 30%, the second highest rate in South America after Venezuela.

While there were no votes against the bill, several – including Senator Roy Barreras – abstained. He argued that the 300 billion peso cost of the referendum is wasteful, especially as the bill may be declared unenforceable by the Constitutional Court.

As feelings against corruption run high, there is a good chance that the referendum will gain the required turnout, even though it will be the fourth vote of 2018.

Law 134 was passed in 1994 and allows citizens to propose a referendum to Congress. In 24 years, this law has only successfully triggered a congressional vote twice: ratifying the legal status of SENA in 1994 and prompting a referendum on the two-term limit for presidency in 2009 (which did not pass the popular vote). 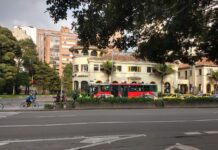