Hybrid Memories
This exhibition, made up of several artistic media, looks into the lives of people living with hybrid identities, where different cultures, cities and towns mix together, creating parallel experiences and memories. It analyses the multiple roles and personalities we adopt in our life, using photography, video art installations and performance art.
BAC, Carrera 7 #57-53, Until February 13

Subjective Atlas of Colombia
Bringing together paintings, works and prints from 46 artists, which use only the three colours of the Colombian flag, this show gives an alternative view on the country, making critical yet sensitive comments on the social and natural contrasts that exist within the country. Highlighting cultural and social issues, each artist brings their own style and personality to the show, which hopes to represent viewpoints from across the country’s cultural spectrum.
Camara de Comercio Salitre, Calle 26 #68d-35, From February 12

Juan Alvarado
“The brain is a dynamic organ in constant transformation, that has an enormous capacity for thinking about stupid shit. And I have to draw all the stupid shit that goes through my head. I don’t even want to imagine what would happen if it stayed there: stupid shit going around my soft brain, mixing with memories of my first communion, the time I saw my neighbour naked and other things that I have saved up in there. The more I think about it, it seems to me that the best place for all this stupid shit is not in a head, but on paper.”
Cine Tonala, Carrera 6 #35-37, From February 12

Victor Grippo
Considered one of Latin America’s most important conceptual artists, the Argentine spent decades exploring notions of transformation, materials and humanity. This exhibition features numerous pieces from the start of his career in the 1960s to his death in 2002.
Museo del Banco de la República, Calle 11 #4-41, Until March 2

Chanoir: El Colgado
The famed Franco-Colombian graffiti artist, who was an integral part of the golden era of street art in Barcelona in the early 2000s, puts on a retrospective that follows his path from plastics artist and sculptor to video and graffiti artist. His black cat has been displayed on streets across the world and is the hallmark of this internationally-renowned urban artist.
MAC, Carrera 74 #82a-81, Until March 14

Marcel Odenbach: Stille Bewegungen
A selection of 14 pieces which offer a panorama of the artist’s work and cast an analytical and emotional eye on human beings in a globalised world. Odenbach works with video installations.
Museo del Banco de la República, Calle 11 #4-41, Until April 27 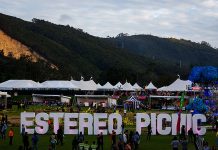