The WTA tour is about to land in Bogotá for the Claro Open Colsanitas WTA tournament as eleven world top-100 players confirm their presence at the event.

The WTA tour celebrates Semana Santa in Bogotá with the twentieth edition of the WTA Claro Open Colsanitas. This year the tournament will be held in the elegant Club Los Lagartos towards the northwest of the city.

The stand out name for this edition is Dutch world number 21 Kiki Bertens. The best Dutch tennis player at the moment has had a difficult season so far with early exits in the Australian Open, Dubai and Miami and is looking to push her ranking back into the top 20.

Games every day from Saturday April 8 to Sunday April 16

Tickets and more info via: copawtabogota.com

2010 Roland Garros winner Francesca Schiavone and 2012 Roland Garros finalist Sara Errani will be the other hot tickets to this event. The current title holder from the USA, Irina Falconi, is also in the running to defend her title.

The Colombian count for this tournament consists of 2010 winner Mariana Duque-Mariño. The 27-year-old from Bogotá reached the semifinals in 2015, but made a first round exit last year. In front of an enthusiastic home crowd Duque-Mariño, currently sitting in 102nd place of the world ranking, could get back within the top 100.

The only Colombian woman who features regularly at the top level will be seconded by 15-year-old, María Camila Osorio and 16-year-old Emiliana Arango who received a wildcard from the organisers. The two youngsters hold a top-25 spot in the ITF juniors world ranking and are looking to catapult their professional careers in Bogotá. Osorio already showed her talent this year in the Fed Cup when she won two out of her four matches for Colombia in the Americas group.

Fourteen-year-old Jessica Plazas, who just came back from a successful tour in the South American youth tournaments, gets a place in the qualifying draw in her first showing on the professional tennis circuit.

The first matches in the qualification draw take of the Bogotá leg of the WTA tour place on Saturday April 8 with the main draw starting on Monday April 10. The grand final is on Sunday April 16. A good plan for those spending Easter Week in Bogotá. 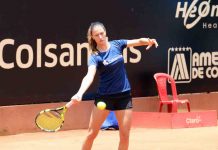 The ball’s in Bogotá’s court, WTA tennis in the capital