Imagine hurtling at 70km/h underground over 2km of twists, turns, uneven stairs and hair-raising bends, all while being filmed. Oh! And you are on a bike. Zipaquirá is best known for its first wonder status in Colombia with its cavernous salt cathedral, but recently it was invaded by a different sort of tourist, the downhill racing type. Known as the Red Bull ‘Ride Into The Earth’, the event took place in October 2015 over what is considered by some to be the most difficult technical downhill track in Colombia.

Starting on the mountain bike track high above the converted salt mine, the riders wound their way down the outdoor section and entered the Salt Cathedral through the main entrance. Unlike conventional visitors, who file carefully to the left, the downhill riders shot right, ramping the stairs, clearing man made obstacles and carrying out technical manoeuvres and turns on the salt surface. Little known and little followed in Colombia, it is hoped that the event will generate interest in the sport of downhill racing, both in the traditional and urban formats.

Colombian Marcelo Gutiérrez, the principal participant in the event, is well known for his exploits on a bike. Ditching his BMX at age 14 he has been competing in the downhill format ever since, often finishing in the top ten in world events and his switch to the urban downhill section has brought him great reward. “It was important to have a project like this, at home, in my home country, home soil”, professed Marcelo, describing the facility as “a track for our – Colombian – riders, where they challenge themselves to ride the whole thing”.

Marcelo recently demonstrated his supreme skills with his fifth straight win in the annual event, held earlier this year, in Manizales. His time of 1 minute 44 seconds could not be beaten by the hundreds of other competitors, confirming his place as the premier downhill mountainbiker in Colombia. 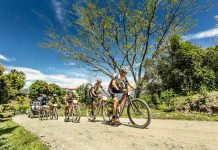 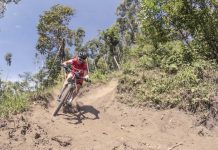