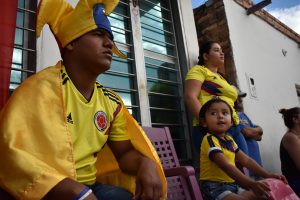 SAN ANTONIO DEL TÁCHIRA, Colombia — Three minutes into Colombia’s opening game against Japan, Darwin has his hands on his heads. Colombian defender Carlos Sánchez Moreno has been been sent off for a handball and Japan’s Shinji Kagawa has calmly slotted in the resulting penalty.

“Marica güevón, it’s like he wasn’t even looking at the ball!”

Darwin spoke in Colombian slang about the Colombian national team in a way that suggested that this team was his. Only in this case, Darwin isn’t Colombian; he’s a Venezuelan who walked over the border that morning to work as a moto-taxi rider.

Like many Venezuelans who make the walk across Simón Bolívar Bridge to escape economic hardship, Darwin makes the most of living so close to the border by working in Colombia while still residing in Venezuela. According to official estimates over a million Venezuelans like Darwin have turned to Colombia for a way out of rampant hunger, a worthless currency and an increase in crime across the nation.

“I try to make a living here so it’s easier for my family in Venezuela,” Darwin said. “But it’s nice to take your mind off work once in a while,” he added about watching the football during work hours. 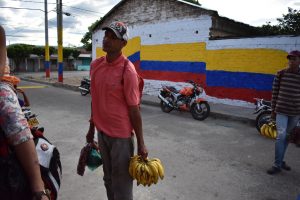 Alexander, 37, from Venezuela peers in on the game between Colombia and Japan.

Darwin isn’t the only one watching Colombia slowly go from a goal down to equalising courtesy of a Juan Fernando Quintero curler from outside the goal box. In a street just behind the town’s bustling supermarket–where Venezuelans purchase basics that have become unaffordable in their own country–Alexander has swung by to see how the Colombians can come back from this.  Carrying strawberries and bananas from his farm across the border, Alexander too is keenly supporting the Colombian team.

“For sure I’m behind them,” Alexander smiles, “We’re all brothers.”

Many are literally brothers. Since the 90s, as a result of the petroleum boom and a stronger bolivar, the boot was on the other foot and many Colombians sought a more economically secure life in Venezuela. As a result, many families are a mixture of the two nations and across the border many Colombians have settled in Táchira, Venezuela as well.

Supporters like Darwin and Alexander are examples of a wider phenomenon across border towns like Táchira where national identities merge and migrants find it easier to adopt local affiliations. It probably also helps that Venezuela’s national team, who have to compete in FIFA’a most difficult confederation, have never participated in a World Cup. 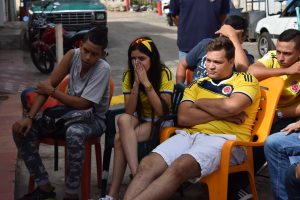 Fans of the Colombian national react to their disappointing 2-1 loss against Japan.

As things go from bad to worse for the Colombian national team, Johann curses that the Colombian players had become over-confident and ought to play with more humility.

Johann, who was named after his father’s favourite composer Johan Strauss II, had studied to be a paramedic in Maracaibo before the worsening situation resulted in him moving to the border town of Villa del Rosario,  spending five days on a park bench in the town square. Eventually, a laundry employed him before he started working full-time in a cafe to get himself settled in his new home. “It took me a really long time to ask for help,” he said, “but I’m grateful for the opportunities that the Colombians have given me.”

A student of the game, Johann has adopted the Colombian national team, known as Los Cafeteros, as his own. He is confident that despite the loss Colombia will come back to beat both Poland and Senegal to make the final round of 16.

“Poland will be different” according to Johann, “They’ll play attacking football and Colombia can’t be asleep when Lewandowski [who is superstar Colombian midfielder James Rodriguez’s teammate at Bayern Munich] is on the attack.”

Darwin shares his compatriot’s belief in the Colombian national team. “They’ll have to change their tactics. Or we’re finished next game.”

Darwin knows better than anyone that in order to survive you have to adapt. 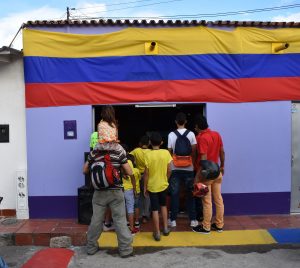 A group of Venezuelans peer in on the game between Colombia and Japan.