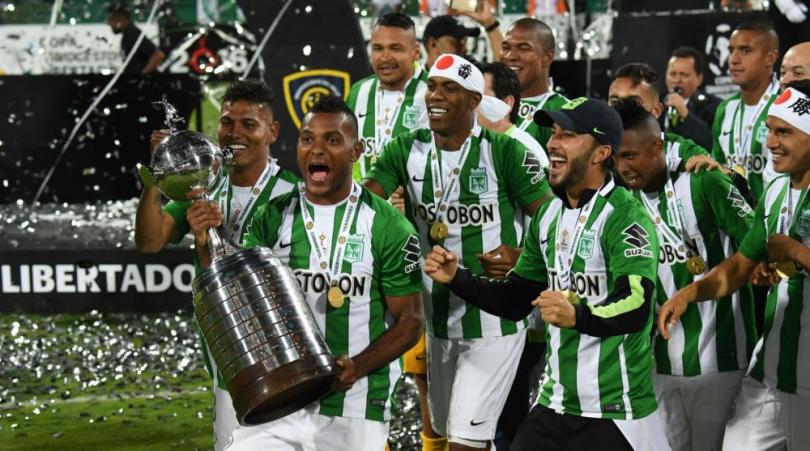 With an early goal from Miguel Borja, Atlético Nacional take their second Copa Libertadores title, giving Colombia yet another continental title to celebrate

As the only goal scorer, Miguel Ángel Borja was the star in the all-deciding second leg of the final. Played in the Atanasio Girardot stadium against the surprising Ecuadorian finalist Independiente del Valle, Atlético’s victory sparked rapturous celebrations in Medellín and Colombia.

The atmosphere in the stadium before the final was intense. It had sold out quickly and tickets on resale went for as much as COP$1.5million. The stadium was packed and covered in green flags. Nacional was determined to decide the final in the early stages of the game. In the first minute Borja fired a great chance over the crossbar but he got his revenge shortly after. Seven minutes into the game, a free kick from Macnelly Torres hit the post and Borja was left unmarked to fire the rebound into the back of the net, taking the score to 1-0.

Nacional kept pushing for more. Orlando Berrío, Borja again, Marlos Moreno and Macnelly all came close, but Del Valle kept it at 1-0 until halftime. In the second half the Ecuadorian side found new breath and created some opportunities to get back in the game, but Nacional were quick to take back control.

The home team kept creating chances, and though the scoreline remained the same, they closed the game without further difficulties. When the final whistle sounded, the Atanasio Girardot stadium exploded and celebrations went on until late at night.

This is the third time in history that a Colombian side has taken the Copa Libertadores title. Atlético Nacional had already won it in 1989 and Once Caldas in 2004. Independiente Santa Fe also won the other continental competition, the Copa Sudamericana in 2015.

Attacking midfielder Alejandro Guerra who played a key role throughout the tournament became the first Venezuelan player to win in the Copa Libertadores.

Unbeaten run in the groupstage

Los Verdolagas showed from day one of the tournament that they were a serious title contender. They had no problems taking a 0-2 victory from Argentina against Huracán in their opening game, when 19-year-old Marlos Moreno was chosen as man of the match.

The new star continued to shine, as he was selected again as man of the match in the following games versus Peru’s Sporting Cristal and Uruguay’s Peñarol. And Marlos was not the only impressive player to have come through the youth ranks. A brilliant team display also saw 19-year-old Davinson Sanchez and Sebastián Pérez making their names with world class performances.

Nacional finished the group stage as number one with 16 points out of six games, having scored 12 goals without conceding a single one. This record guaranteed a home finish in the following knock-out stages.

Armani keeps Nacional in the tournament

The opponent in the round of 16 was Huracán, who had been in the same qualifying group as Nacional. The match in Argentina was a tight display that ended in 0-0, but an eventful 4-2 in Medellín saw Los Verdolagas qualify for the quarterfinals.

Nacional goalkeeper Franco Armani put in some incredible saves to maintain the goalless draw. It was also his outstanding efforts that minimised the damage of Rosario Central’s attacks in the quarterfinals, when the Medellín side were lucky to get away with the small 1-0 defeat.

That turned out to be the only defeat Nacional suffered this tournament. In the return match, Nacional trailed for the almost all of the 101 minutes of play, until Orlando Berrío scored the winning goal in the 96th minute, providing a heated finish of the game.

The tournament had to break after the quarterfinals for the Copa América. During the pause, Nacional’s Victor Ibarbo and Jonathan Copete joined teams abroad and many other players seemed set to leave. Davinson Sanchez signed for Ajax and Alexander Mejía for León in Mexico, but both key players negotiated to stay with the team until they had finished the Copa Libertadores.

The side was unchanged for the majority of the cup, but it was Miguel Ángel Borja, freshly signed from Cortulua, who made the difference in the semifinals. Nacional faced Sao Paulo and after a tricky start it was Borja who scored twice to put the team in a comfortable lead before the return match in Medellín. The return unfolded without major problems for Nacional as the 23-year-old striker scored two more goals.

Their rivals in the final, Independiente del Valle, also had a remarkable run in the cup. The relatively unknown Ecuadorian side had an extraordinary succession of victories, taking them past Colo Colo, River Plate, UNAM pumas and Boca Juniors into the finals. In the end, the 1-1 draw in Quito and 1-0 defeat in Medellín were not enough to keep Colombia from winning their fourth continental trophy in club football.

The Copa Libertadores title makes Atlético Nacional the fourth team to qualify for the FIFA Club World Cup 2016 in December in Japan. European Champions League winner Real Madrid, América from Mexico and Auckland City from New Zealand have already qualified. The champion of the Japanese league, the Asian champions league and the African Champions league will complete the field.