‘Culture Cab’ from BBC’s The Arts Hour visits photojournalist Jesús Abad Colorado’s exposition El Testigo and other expressions of the armed conflict. We follow in their trail.

BBC Radio 4’s The Arts Hour came to Bogotá on tour last month. We caught up with the show’s presenter, writer and curator Nikki Bedi before their recording in the capital, which is now available on the BBC website.

The show, which visits a different city every month, doesn’t look at Bogotá through the eyes of a traveller. Rather, it’s an artist-led project that really gets under the skin of the city.

Nikki says that the programme looks for people who are doing something different or have a story to tell. “You have to choose people who are using whatever’s going on at the moment to create their art. So as long as someone is responding in some way to the country’s or the city’s situation – or maybe a moral question in a place, they are of interest to us.”

“We always try to go to a city that is in a moment of change,” Nikki tells me. “Because that’s obviously the most fertile time for artists.” Bogotá and Colombia certainly are going through changes, and the show touches on themes of memory, conflict and reconciliation. But more specifically, Nikki is interested in the role that artists and storytellers play at this crucial time.

In every city The Arts Hour visits, they do something called the Culture Cab, where one of the guests takes them to uncover some of the city’s hidden artistic gems. It certainly made a change from the usual Monserrate-Gold Museum-Paloquemao tourist circuit.

Aterciopelados star Andrea Echeverri – who Nikki said was greeted as a national hero everywhere they went – started by taking the BBC crew to the Auras Anónimas artwork in the cemetery. The well-known presenter described Beatriz González’ intervention in the vaults as “such a beautiful monument to all those unnamed, unclaimed people who disappeared or were murdered.” She added, “So there was a sort of theme about memorialising and not forgetting. But also moving forward.”

Hear the show online via the BBC World Service’s website

The Centro de Memoria, Paz y Reconciliación which holds the Auras Anónimas (Anonymous Auras) is on the busy Avenida El Dorado. But upon stepping through the gates, the sound of engines and beeping horns seems to fade away, and one is enveloped in an eerie quiet. Beatriz González’ figures – etched onto stylised rows of the columbariums that Catholics use to house cremation urns – stretch away towards the cemetery, whilst the huge block of stone that is the Centro itself towers upwards into the sky. It feels something of a wasteland, empty apart from the occasional strolling visitor and a solitary black cat. She prowls along the columbariums, staking her territory beyond the yellow tape which I, with my camera, am strictly instructed not to cross.

The tape may limit access to the majority of Auras, but it does little to limit their impact. The 8,957 silhouetted figures carrying corpses stretch on and on: the anonymous victims of Colombia’s armed conflict literally out in black and white.

The idea to transform the columbariums into a space of memory and mourning for the nameless victims of war was originally planned to last for two years, but the Auras have remained for nearly a decade thus far.
Inside the Centro de there are further reminders of those who were killed, displaced, kidnapped or simply lost to not-so-distant history. “Memory resists death” states a plaque on an inside wall, “we build the past so that dreams return.”

A gentle stream of people through the first floor of the Claustro de San Agustín, taking in Jesús Abad Colorado’s El Testigo (The Witness). But despite its popularity, the rooms are hushed as visitors absorb the story that surrounds them through the hundreds of photos hanging from the white walls.

So often, when one looks at images of tragedy, they are distanced either by time or physical space. There is no such reassuring remoteness here: next to each photograph, the date and location are all clearly stated. All were captured between 1992 and 2018, and all inescapably close by – in Colombian territory and easily recognisable.

The photos are interspersed with descriptions of the events they capture, accounts from the photographer himself, and quotes from their so that they really do speak directly to the observer. On the outer walls, amongst poems from American civil rights activist Maya Angelou and writing from Colorado himself, are graphs charting the numbers of kidnappings, displacements and deaths. All are equally valid records, all part of an exhibition of human tragedy and suffering.

The volume of visual information is almost overwhelming, leaving one feeling as well as emotionally drained. But this is perhaps exactly what the photographer intends. It is not just Colorado who is is a witness: each visitor is compelled to feel that they, too, become one. Their role to remember is no longer a choice, but a duty.

Los Fragmentos (The Fragments), is a counter-monument created by Doris Salcedo when working with survivors of sexual violence in Colombia’s conflict. “In war, we talk of attack and counter-attack. In peace, about monument and counter-monument,” states Salcedo via a video in the exhibition.

Nearly 9,000 tonnes of arms handed over by the FARC following the peace deal were melted down and hammered into shape by these women to create the floor tiles which form the base of this space of memory. The engagement with the past here has been physical, symbolising the reversal of the gendered power relationship which these weapons facilitated.

“All that metal was then hammered into by women who’d been victims of rape and violence as a result of the conflict. And then this metal was made into tiles and those tiles are the floor in this building,” says the BBC’s Bedi.

The silence and emptiness of the high-ceilinged rooms the void left in the wake of conflict. However, such a void must be filled. The tiles embody a physical platform upon which memories can be formed, as well as being a blank canvas which allows each individual to come to terms with the past.

Despite the name, the impression it leaves is not one of the broken, human ‘fragments’ of war, but rather one of shared experience. It is a space of strength and healing through collective forgiveness, albeit for a past that cannot be forgotten. 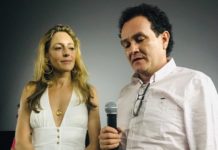