Chris Erb and Eduardo Cote begin a regular feature about buildings, with a visit to the ‘Dom-inos’ by Bachué

Who would have thought that Bachué, a French-Swiss architect from almost a century ago, would have a communal housing design taking root in northern Bogotá?

That’s exactly what you’ll find in the rather unusual neighbourhood of Bachué. Designed by Colombian architect Patricio Samper Gnecco, and built between 1978 and 1982, the project offered social housing to the seemingly never-ending stream of people making Bogotá home.

Bachué lies in northwestern Engativá, sandwiched between Suba and the airport, and perhaps a little immodestly named after a Muisca goddess who is said to have given birth to humanity.

A glance at a city map will tell you there’s something different about the area. The blocks are small but incredibly dense and are mostly pedestrianised; only a few streets are wide enough to accommodate cars. The buildings are long and narrow with boxy additions stacked one on top of the other onto the original structure. 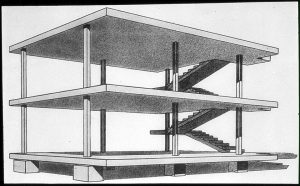 Samper was chiefly inspired by French-Swiss architect Le Corbusier’s ‘Dom-ino’ houses: structures with an open floor-plan, built from concrete slabs held up by reinforced concrete columns along the edges. The columns allow the buildings to be built without load-bearing walls or support beams for the ceilings. This generic and open plan allows for a great deal of flexibility and can be constructed quickly and cheaply. Le Corbusier called his houses “machines for living in”.

In all, approximately 140 buildings were constructed in Bachué. They are split between six massive superblocks on a plot of land of about half a square kilometre. The buildings are separated by well-connected public spaces, about double the width of an alley, where apartments can be accessed at ground level or from stairways that reach long balconies along the upper floors.

Larger streets divide the superblocks, wide enough for cars and pavements. It is here that the majority of small shops can be found, with a number of services such as restaurants, grocers and hairdressers. While most of the area is intensively built-up, the neighbourhood boasts a sort of modernist central plaza with one of the neighbourhood’s two churches, a large park and a market.

When Bachué was originally built, the idea was to provide housing for an influx of low-income families, many of whom had recently arrived in Bogotá after having been violently displaced from the countryside. The new residents, many from estratos one and two, had three options: a house, a duplex apartment with a yard or a simple apartment for single people.

The “finished” buildings were mostly simple structures without doors, windows, kitchens or bathrooms. This was thought of as “un proceso de autoconstrucción” and opened the way for residents to progressively build their apartments, literally brick-by-brick, according to their needs and budgets. The flexibility offered by this design philosophy means that each building now has its own unique character, while still retaining the uniform configuration and distribution of the superblocks.

Giving residents only the bare bones and empowering them to do the rest had the knock on benefit of fostering a sense of solidarity. The process of building not just their apartments, but also the streets and public spaces, turned a simple housing scheme into a real community.

We went for a walk through Bachué on a sunny Sunday afternoon and found a typical, bustling working class neighbourhood, albeit in quite unusual surroundings. The narrow buildings, with their additions perched on top, towered over the activity on the main streets, which were crowded with mostly late-model cars parked haphazardly. The shops were doing brisk trade and lots of people were going about their daily business on foot or by bike. The narrow pedestrian streets were also busy, with people walking to and from buildings or just relaxing in front of their apartments.

The lack of cars meant children could play in safety and families could talk and lounge without being interrupted by passing vehicles. These spaces are well kept and many have small gardens maintained by residents. It certainly seemed as if there was a strong community life there, with many people stopping in the streets or at the fruit and vegetable market to gossip or catch up. People certainly knew each other; we saw a fight almost break out between two men as soon as they saw each other. While it may not be the best demonstration of community spirit, it was clearly a feud that had been brewing for a long time. Neighbours grabbed each man and held them back, eventually one was taken to a different area to calm down.

After 40 years, this is a neighbourhood that is still unfinished, and will remain so. Unlike other social housing projects of its type and time, Bachué was purposefully designed in a way that gave residents agency and control over their built environment, allowing the district to grow and change organically. While poverty and crime are persistent problems, the ingenious combination of planning and organic growth has given Bachué’s residents a flourishing and healthy community that they can truly call home.

By Chris Erb and Eduardo Cote 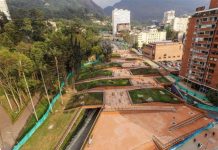