The tenth anniversary of this vallenato festival will see legends of the genre competing to be crowned The Great Francisco el Hombre.

In recent years I have had the opportunity to get closer to the traditions, gastronomy and majestic landscapes of the department of La Guajira, gaining a deeper understanding of the cultural diversity of its inhabitants and their beliefs, including fantastic stories about about ancestral characters.

Vallenato music has been part of that journey of exploration. My hometown of Valledupar is a city directly related to this genre, but it is undeniable that the music also has deep roots in La Guajira. Most of the famous composers and singers are from towns like San Juan del Cesar or Fonseca.

The Francisco el Hombre Festival – a musical festival that seeks to strengthen and preserve the cultural heritage of this department – was born out of these strong traditions ten years ago.

Two past festival winners took to the stage for the official launch in Bogotá, just a few weeks before March 16, when the big event kicks off. Pillao Rodríguez and Carlos Mario Zambrano filled the capital with verses and a traditional parranda vallenata.

Colour, typical food and accordion notes permeated the morning, giving attendees a taste of the cultural richness on offer at the three-day celebration. Organisers managed to bring a little bit of La Guajira’s magic into the room, with glimpses of the wonderful musical and stunning attractions that make the trip worthwhile.

Taking place in department capital Riohacha, the festival has become a propeller of the local economy, providing a platform for new performers, groups, accordionists and composers of vallenato music, as well as an engine for tourism.

Related: Jaime Dangond Daza, the story of a Vallenato king

Vallenato greats like Silvestre Dangond, Poncho Zuleta and Wilfran Castillo will be showing audiences what this much-loved genre is all about. On top of which, as it is the tenth edition, winners of previous festivals will battle it out for the distinction of ‘The Great Francisco el Hombre.’ Not just a competition to be the best musician of the year, this is a competition to be crowned as the stand-out performer of the decade. And the epicentre of this epic accordion-off will be a stage in front of the Caribbean Sea.

Vallenato will obviously be front and centre, but the festival also includes gastronomic and art exhibitions, as well as sports and cultural activities – showcasing the best of La Guajira.

And if you want to venture further than the festival and actually see the best of the region for yourself, you can visit Cabo de la Vela, Punta Gallinas, Los Flamencos Sanctuary, Monte de Oca, Manaure, Palomino, pass by the ‘rancherías’ and get to know a bit of the Wayuu culture. Splash out on a Wayuu-handcrafted woolen bag or a guajiro hat to accompany you on a tour of the region where, according to the legend, a man won a battle against the devil with only an accordion playing vallenato music. 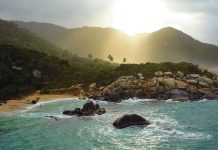 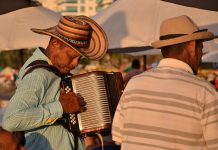 Toke Music: How vallenato was courted by the coastal cannabis cartels