Home Bogotá Breaking borders tours: ‘You can’t leave, but you can change’

Tourism triumphing over violence and breaking borders in Barrio Egipto.

“You can’t leave, but you can change,” states Jaime Roncancio, seated on a log overlooking Barrio Egipto. Perched high above La Candelaria, the neighbourhood is famous in Bogotá for two reasons: the annual celebration on Three Kings Day (January 6) which takes place at Nuestra Señora del Egipto, the church positioned at its entrance, and the gang wars which meant that, just three years ago, it was a no-go zone for anyone else in the city – tourists in particular. And it is this gang culture, not the neighbourhood itself, to which Jaime is referring.

Otherwise known as ‘El Calabazo’ – ‘The Pumpkin’ – Jaime went from leading the Decima – the neighbourhood’s resident gang – to leading tours through its stomping ground. The initiative took off just a month after he left prison, now almost three years ago.

Sporting his royal blue official Breaking Borders gilet, Jaime certainly looks the part of the tour guide. But part of the point of Breaking Borders was “Changing the people [themselves], not changing the people [who run the tour].” So technically, he reminds us, he is “still a gangster.” He is just as happy to show off his scar, marking where a bullet entered one side of his stomach and left through the other, as he is to playfully act out the shootings and violence he used to play a part in, fingers pointing this way and that in the shape of guns.

The present generation might not be able to leave the gangs, but they are striving to ensure that the next never join. Jaime proudly tells us that children in the barrio used to aspire to be gang members, and now they aspire to be guides.

The money donated by visitors helps too, as tourism gives both funding and motivation to improve the infrastructure, albeit in what is still very much a shanty town. Some of the cash has been directed towards building of a local football pitch and holding of matches between the children who live not only here but also in adjoining neighbourhoods. The pitch is just part of the ongoing transformation, which has also seen the construction of a bridge and ongoing work to build a viewpoint.

Related: Stay-cation, several Tours you can do in Bogotá

The history of Barrio Egipto is well explained by the tour guides as they talk about the gangs themselves, how they originally formed and how the rivalries between them developed. However it is also visible on the walls of the steep streets themselves, in the form of colourful graffiti, in the marks left by bullets. Perhaps most, strikingly it can be seen in a picture frame which hangs in Jaime’s house, filled with the faces of family, friends and fellow gang members, the majority of whom lost their lives in the violence that used to be part of everyday life here.

Establishing the tour wasn’t without its obstacles. The gang’s change of tactic – from robbing tourists who ventured too close to the outskirts of Barrio Egipto to inviting them within its borders – was, understandably, met with some suspicion from the police and others. But their reputation now seems secure, aided by a mention in the Lonely Planet guide and recommendations from various Bogotá hostels. In fact, Jaime hopes that visitors will not even need a guide in the future, as they’ll be able to explore the neighbourhood on their own.

Thus far, however, the best option is to follow Jaime or one of the 22 other guides up the streets from the meeting point of Plaza del Chorro de Quevedo and benefit from the knowledge, insights, and first-hand experience that they have to share.

Tours are technically free, asking for a donation as well as selling various items such as badges and books of ‘gang slang’, the proceeds from which go towards different initiatives in the area as well as back to the tour itself. To book, speak to El Calabazo himself on 301 6860755.

Also available are night tours and a tour to the top of Guadalupe for those who want an alternative to the crowds of Monserrate. 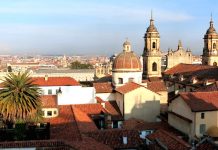