Home Features ‘Can you make it?’ campaign crosses Europe

How far would you get if you had no money, no cards, and only a couple of cans of Red Bull to trade? Can you make it?

If you had to travel across Europe for five days using only Red Bull as currency, could you do it? That’s the challenge that the creators of the drink that gives you wings are issuing to young people everywhere. And no, you can’t fly.

The competitors will have no cash, no cards and only 24 cans of the golden drink. The idea is that they use them to barter, bargain and charm their way across the continent, accompanied only by an unlimited data plan so that they can post videos and photos of themselves along the way.

You never know, maybe it’ll be to us millennials what Jack Kerouac’s On the Road was to the Beat generation.

That said, there are several crucial differences between the travels of Paradise and his friends’ intoxicated odyssey across the USA and Mexico, and Red Bull’s ‘Can you make it?’ challenge. The first is that although Red Bulls are rather stimulating, they are not in the same league as the substances digested in On the Road. The second is that in this case, the aim of the game is not the consumption of Red Bulls in excessive quantity, but rather to use them as barter. The adventurers will have no other currency as they find their way from starting points in Madrid, Budapest, Manchester, Stockholm and Rome to the finish line – in Amsterdam.

Reading about the challenge put me in mind of Sal Paradise reflecting about a friend who was under the influence, “It was early in the morning; his energy was at its peak.”

Related: Cesar, Diego and Mateo represent Colombia in the Can you make it campaign

Energy is an essential element of Red Bulls’ initiative. The contestants will need to require the unmitigated kinetic power that Paradise’s friend was described as possessing if they are to complete the task. And those who take part in the challenge would be wise not choose a friend like Dean Moriarty, because this is a mission that involves teamwork. Together, you are going to need to find places to stay, modes of transport and if you get sick, you’ll have to count on your pal sticking around rather than heading off on their own solo-mission.

Red Bull’s undoubtedly brilliant scheme will see 200 students from 60 countries compete in teams of three during the week of April 10-17. There are certain requirements to take part – the contestants must have a minimum age of 18; they must be citizens of the country they live in and they must be at university. Upon arrival at one of the aforementioned five cities, the competitors will have to hand in their mobile phone, wallets and  anything else that could give them an unfair advantage in exchange for 24 fat-ass cans of Red Bull and a smartphone equipped with unlimited data.

During the trip, the teams must post videos and pictures of their movements, as well as visiting ‘control points.’ At these locations, a set of tasks, called the ‘Adventure List’, will be given out, each one requiring different levels of effort and creativity. Completing challenges wins the groups – you guessed it – more cans!

Exchanging Red Bull for daily necessities will take skill, flair, but also a good deal of research. Contestants might take some lessons from ex-Premier League manager and renowned “wheeler-dealer” Harry Redknapp, widely considered a man of exceptional quality in the transfer market. Not a fan of football? Well then, look no further than the modern cinematic classic, Wolf of Wall Street, and the scene in which Brad Bodnick sells Jordan Belfort a pen. “Supply and demand, my friend,” Brad explains after successfully selling the pen within mere seconds.

Whatever the inspiration, an entrepreneurial spirit is a definite prerequisite to swap the cans for essentials such as food, transportation and a place to rest your head.

Of course, that fact that it’s a competition will see the winning team rewarded by a hitherto unspecified ‘incredible’ prize. Although, aren’t the memories and experiences you’ll share with two close friends the real prize?

Follow the teams in the Red Bull’s ‘Can you make it?’ campaign from Tuesday April 10 to 17 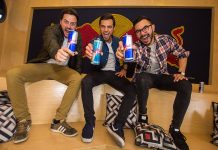 Red Bull’s ‘Can you make it?’ challenge: Colombia’s contestants decided