Home Latest Centre-left candidates bond over coffee, but is it too late to spell...

If the Colombians don’t break bread, they sit down for a sugary black brew of coffee. Yet it wasn’t the bittersweet moments of their political rivalry that Sergio Fajardo and Humberto De la Calle deliberated over as they posed in front of the cameras and sipped black coffee. Instead they chose to talk of the future and, rather than fight for the centre-left’s affections, they chose to join forces against the two more polarising candidates, Gustavo Petro and Ivan Duque, both of whom scored victories during the recent primaries in March.

With more in common than they have in differences, why has it taken the spectre of electoral failure for Fajardo and De la Calle to come together?

Until this week, it had been Fajardo who had rejected De la Calle’s offers of a joint ticket in the general election. From the inception of his campaign, Fajardo had positioned himself as an outsider free from party corruption and infighting. The stain of corruption on the Partido Liberal had left Fajardo little choice in distancing himself from de la Calle. “We agreed to fight against corruption and crony capitalism, and that makes an alliance with the Liberal Party meaningless.” Fajardo said in a December interview with BluRadio.

The Partido Liberal has for their part also been subject to inter-party infighting among the card-carrying members of the Partido Liberal where some wished to leave open the opportunity open to back a Duque presidency should he have a strong showing in the first round. Duque had been the strongest candidate in the primaries in early March, winning over 4 million votes, and he still charms a significant block of centrist liberals.

On the other hand, calls by leftist candidate Gustavo Petro to form a grand alliance on the left against Duque have fallen on deaf ears and it remains to be seen how much of a Fajardo/De la Calle alliance can draw members away from Petro’s base.

In any event, the largest hurdle standing before any liberal union is the legality of such a move. The registry already lists Fajardo and De la Calle as separate candidates though they have until April 27 to rectify that. At this stage both candidates are aware that any chance of a unified ticket stands in the hands the National Electoral Commission (CNE) and their decision on the matter.

De la Calle petitioned the CNE on Tuesday to rule on the propriety of the alliance though the move might have significant financial repercussions. Many commentators believe De La Calle may be compelled to return the 40 billion pesos that had been used by the campaign during the primaries if the CNE rule the alliance as improper.

The local media seem convinced that time and electoral law are not on the centre-left’s side. Meanwhile, photos of a grinning Fajardo and De La Calle hope to send a different message to the voters with their coffee summit. Keep calm and drink a tinto. There’s two months still left in this horse race. Anything could happen. 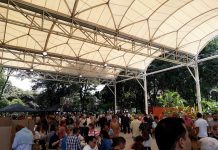