As the Venezuela Colombia border spat rumbles on, Mike Mackenna takes a look at the history of the conflict between both countries, and what we can expect next

Just two years ago, displaced Colombians were singing the praises of living in Venezuela. They benefited from vastly greater security, and generous Chavista social programmes that provided them with food and housing. More than 1,300 Colombian refugees had found a home in the neighbouring country, which seemed to offer them respite from the horrors of the armed conflict in their homeland.

That respite turned out to be temporary. On August 19, the government of Venezuelan President Nicolás Maduro expelled more than a thousand Colombians from the Venezuelan border state of Tachira, forcing them to cross the Río Tachira into the Colombian department of Norte de Santander.

Since then, almost 10,000 Colombians have left Venezuela. President Maduro explained that the deportations were part of Operation Liberation and Protection of the People (OLP), an initiative which aims to eliminate criminal gangs in Venezuela. According to Maduro, “there are 30 Colombian paramilitary groups in Venezuela”, which have been brought there as part of an effort by the extreme right to topple the Maduro government. Besides expelling Colombians, Maduro has also implemented martial law in several municipalities in Tachira, supposedly to make it easier to combat the rampant criminality on the border.

On the Colombian side, the frontier crisis gave political observers a chance to see the night-and-day stylistic differences between the country’s two most powerful politicians. President Juan Manuel Santos took an understated tone, claiming the deportations would make ordinary people suffer, without touching the mafias behind a contraband trade so lucrative that it would have made Pablo Escobar jealous. Santos’ measured, diplomatic approach stood in sharp contrast to the blistering condemnations of his predecessor, current Senator Álvaro Uribe, who compared the expulsions to Nazi Germany’s treatment of the Jews.

This is certainly not the first time Colombia and Venezuela have butted heads at the border, nor is it news that organised crime is flourishing there. So why did Maduro choose now to start kicking Colombians out?

The recent history of the border crisis starts with the tumultuous relationship between Álvaro Uribe and the late Hugo Chávez, Venezuelan president from 1999 until his death in 2013. Uribe and Chávez clashed over several supposed violations of each country’s sovereignty, with Venezuela claiming that Uribe was sending paramilitaries to destabilise the Chavista government, and Uribe claiming that Chávez was giving the FARC refuge in Venezuela.  Uribe’s accusations led to Chávez breaking off relations and closing the border with Colombia in 2010.

Despite the dramatics of this feud, it didn’t create the border crisis on its own. In fact, the crisis might owe more to a deadly mix of Colombia’s armed conflict, and Chávez’s shortsighted, populist economic decisions.

Santos and Uribe’s responses did have one thing in common: neither of them paid much attention to Venezuela’s accusations about Colombia exporting paramilitaries. Colombian Senator Iván Cepeda, however, supported Maduro’s accusation: “[The exportation of paramilitarismo] is real and our government refuses to talk about it,” he declared in the Senate.

There is some debate about whether or not there are paramilitaries in Venezuela, but there is no doubt that the bacrim (bandas criminales), which are thought by some to be the current incarnation of the paramilitaries, are in the Colombian departments along the border. The bacrim, along with the FARC, dominate the outrageously profitable racket in contraband petrol.

None of this is to suggest that those deported were themselves involved in organised crime. Manuel Rueda, South American correspondent for Fusion, spoke to several of those who fled their homes, and told The Bogota Post that they were mostly poor people working in the informal economy.

How to create a black market

These vast price differences are a result of Chávez’s 2003 decision to control prices in Venezuela, and Venezuela’s long-running distinction of having the cheapest petrol in the world, dating back to World War II. The price controls and subsidies were intended to benefit lower income families, but when combined with the government control over the dollar supply, they have also led to shortages and a thriving contraband trade. As Rueda explained, “A truck driver brings a shipment of corn flour into Tachira. He knows he can sell it for five times the price in Cucuta. What do you expect to happen?”

Shortages have been exacerbated by the diminished cash flow from the plunging oil price, estimated to have cost Venezuela over USD$2 billion. Oscar Brito, a Venezuelan political activist, told The Bogota Post, “Our economy is in crisis, because we’re practically a mono-producer of oil. When the price dropped abruptly, our dollar supply also dropped.”

Some observers at least partly defended Maduro’s justification for expelling the Colombians. Andres Gil, spokesman for the left-wing Colombian political party Patriotic Union, said that while Maduro’s deportations were wrong, he was right to blame the Colombian mafias for the contraband trade. Telesur, the Venezuelan media outlet described by the Miami Herald as the “brainchild of Hugo Chávez”, reported that the border closure is designed to combat an alliance between Colombian paramilitaries and Uribe that has crossed into the Venezuelan border.

Others have been more skeptical of Maduro’s explanations. Columnist Daniel Coronell wrote in Semana, a magazine whose director is President Santos’ nephew, that Maduro has three reasons for the expulsion: to make the Colombians into scapegoats for Venezuela’s economic problems, to punish Tachira for electing opposition candidates, and to practise implementing martial law on a small scale, before trying it on a much larger scale during the upcoming December elections. With Maduro’s approval ratings in the 20s, the Chavistas might be preparing to avoid a loss in the elections by declaring an estado de excepción.

Rueda supports Coronell’s thesis: “The Venezuelan government is more interested in political power than taking care of its people.” And Brito made a similar comment: “We are coming up on parliamentary elections, and the Maduro regime will do whatever it takes to distract us from our serious domestic problems.”

Hoping for a resolution

Colombia’s diplomatic options for managing the confrontation already appear to be running out. The Organization of American States (OAS) voted against debating the crisis. Shockingly, Colombia also failed to win the support of its own ex-president and current Unasur head, Ernesto Samper.

Perhaps the only government officials to shine in this whole tragic process were the Colombian public servants working at the border. Rueda praised the Colombian humanitarian response, and in a bit of dark irony, claimed that the government was much more compassionate with those who were expelled from Venezuela than the more than six million Colombians who have been internally displaced. Hopefully those unfortunate people forced to leave their homes in Venezuela will find stability back on this side of the border, though there is little reason for optimism. 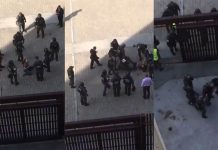 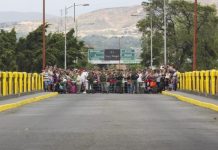