Love for the country is one of the few things that generally pulls Colombia together rather than apart.

Tomorrow is Colombia’s independence day, and it’s hard to know what’s going to happen. There will be another national strike. It might be big, it might be small, there may be incidents or there may not. There have been all kinds of claims and suggestions. One thing we do know is that Colombian tricolores will be everywhere.

As a symbol, the Colombian flag is very much up for grabs. Álvaro Uribe plays on patriotism often, calling himself El Gran Colombiano. The C in FARC stood for Colombia, and they had tricolores on their uniforms, as do the Policia Nacional. Duque talks often of patriotism and flags fly on his desk and over his building, just as they do in the multitudes protesting against him.

So the tricolor is a banner that has many armies marching under it. Tomorrow, we’ll see protestors proudly bearing the flag to show they represent the people, facing off against police who have the flag sewn into their uniforms to represent their connection to the people. The president will stand under the Colombian flag, possibly with a tricoloured sash as well, showing that he represents the people too, as do all the opposition politicians. In the end, the flag represents everybody and therefore nobody.

Not just the flag, but in fact all the trappings of nationalism and patriotism (while they’re different, there’s plenty of crossover) are used in abundance. National team shirts are standard attire on protests, whether for the left or the right of politics. There’s a subset of protestors that retain the flag but invert it – showing that they believe the administration is betraying the country.

Flag waving can have different connotations

For an Englishman such as myself, it’s all a little strange. The flag of England has had a bad reputation over the years, partially reclaimed by football. Certainly, for most of my life, it was explicitly connected to racism and violent neo-nazi groups. Of course, patriotism for the English is very different than for Colombians: many countries have independence from the British Empire, there is no freedom day for the English themselves, despite what Boris Johnson says.

Some of that carries over for me in Colombia – I’m uncomfortable with the flag-waving and chest-beating that still accompanies a lot of patriotic fervour. Luckily, Colombian flag fervour doesn’t seem to translate into xenophobia and racism. While both of those are problems that do exist, this isn’t the symbol that they use. The tricolor seems to genuinely include all Colombians, although some indigenous groups choose to eschew it.

The key in all this is trying to harness the power of all that nationalism and patriotism. While it might not be comfortable for someone like myself, the fact remains that Colombians are fiercely patriotic and rarely go too far into the darker depths of full-on nationalism. If a politician could subvert that for their own machiavellian ends, the results could well be horrifying. It’s a force that’s often gone that way – as Europeans have seen all too many times in the past.

In the end, it seems that the flag is a symbol of unification. If you speak to ten Colombians you’ll usually get 11 or more opinions on most subjects. But there’s a widespread agreement that the flag matters and patriotism is important. While there’s often violent disagreement about the path the country should take, the vast majority care deeply about their country. After years of stigmatisation and emigration, Colombians from all parts of society are again speaking proudly of their country and haven’t allowed any single faction to place themselves as the guardians of patriotism.

Oli’s big topic: Everyone needs a bit of Parklife 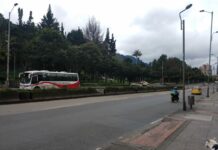 End of Bogotá quarantine: 5 things that can jog on