Just under half of the Colombia squad play their club football on domestic soil. Freek Huigen takes a look at some new faces to watch out for in the Copa América

That Colombia manager José Néstor Pekerman is in a phase of transition with his cafeteros side is evident in the Colombia squad he has chosen for this Copa América, as is the fact he has one eye firmly on the 2018 World Cup. Ten of the players he has picked currently play their club football on home soil. In comparison, in last year’s group, representing los cafeteros on the Copa América in Chile, only the reserve goalkeepers played in the Colombian league, while the 2014 World Cup squad had just three players from the local league – two of which were backup goalkeepers.

Atlético Junior anchorman Guillermo Celis, is one of the country’s home-based players, along with Independiente Santa Fe’s goalkeeper Róbinson Zapata and their giant centre-back Yerry Mina. Also on the plane to the US were Independiente Medellín’s holding midfielder Daniel Torres and surprise call-up, Deportivo Cali’s Andrés Roa.

Atlético Nacional provide by far the biggest contingent: the reigning national champions and Copa Libertadores semifinalists have five players in the Copa América squad. This comes as no surprise; the Medellín-based ‘verdolagas’ have been dominant in the domestic league, and progressed from their group in the continental club competition without conceding a single goal.

Farid Díaz is a strong contender to occupy the left-back berth after a solid showing in the warm-up friendly against Haiti; midfielder Sebastián Pérez, a one-time Arsenal trialist, has cemented his place in the heart of the midfield on the back of impressive performances in Colombia’s qualifiers against Bolivia and Ecuador. Goalkeeper Cristian Bonilla and central defender Felipe Aguilar are in the squad as back ups and will be hoping more than anything to learn from the experience.

The player to really look out for is 19-year-old winger Marlos Moreno. This has been a breakthrough year for the youngster who exploded onto the scene relatively recently. He was rewarded with a place in the Colombia squad for the World Cup qualifiers in March, and provided the assist for the winning goal against Bolivia. This predictably lead to a surge in interest from European clubs, with the likes of Atlético Madrid, Paris Saint Germain, Liverpool and Sporting Lisbon reportedly interested in securing his services.

Marlos has had problems with consistency, especially having set such astronomical expectations for his potential, but thankfully he seems to be back in form on the eve of the Copa América. He could also be deployed as striker and is even a possibility to start, but in all likelihood he will be used more as an impact substitute in order to make full use of his electric pace. 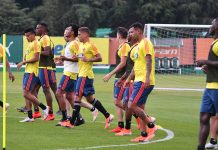 Colombia vs Qatar: Colombia look to wrap up a quarterfinal spot with time to spare