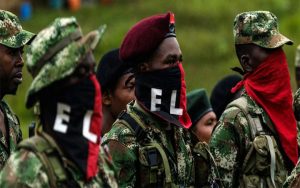 Talks will resume in Cuba between the Colombian government and rebel guerrilla group ELN following Ecuador’s surprise decision to pull out last month as intermediary between the two conflicting parties.

The resumed talks will be the fifth cycle of negotiations and will focus on negotiating a ceasefire as well as developing an agenda that could lead towards the creation of a framework agreement, according to a communiqué released by the office of the Colombian President.

Gustavo Bell, who heads the negotiation team on behalf of the government said that “[t]his announcement reiterates the firm intention of the seat to continue working for the development of the agenda that allows us to sign a final agreement to end the armed conflict, and places us on the path of peace that Colombians long for.”

Meanwhile, chief negotiator for the ELN, Pablo Beltran, told telesur English that “[w]e hope that in the time remaining in negotiations we can arrive at a new truce that must be better than the last one… Colombia can count on us that we will maintain the effort to find a political solution.”

Ecuador had been the seat of negotiations for the two parties since February 2017 before abruptly suspending their role following increasing violence against Ecuadorian citizens along the Colombia-Ecuador border.

The talks had been fraught with tension given frequent blockades and attacks by the ELN on oil infrastructure, police officers and military personnel. Most recently the ELN, who are considered a terrorist organisation by the US and EU, bombed military vehicles on the border with Venezuela, killing five soldiers in the attack.

Last month, 5 Ecuadorean citizens were abducted by an offshoot of the FARC–the former Marxist guerrilla group that have formed a political party following their disarmament–referred to as Frente Oliver Sinisterra. Three of the captives were press workers in Ecuador and were subsequently  slain. Their deaths sparked a worldwide outcry and, although the killings and abductions had nothing to do with the ELN, the growing violence seemed to have swayed President Moreno’s decision in suspending Ecuador’s role in the ELN negotiations.

That decision now gives Cuba the chance to be once again at the centre of history, having hosted the final talks that led to the signing of the peace agreement between the government and the FARC.