Home News, Analysis & Opinion DEA chief under investigation for procuring sex workers in Colombia, according to... 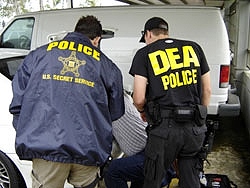 The checkered past of the U.S. Drug Enforcement Administration (DEA) post in Colombia may have added another unfortunate incident to its history. The Associated Press reports that the head of the DEA in Colombia, Richard Dobrich, may be under investigation for allegedly using drivers hired by the U.S. Embassy to go out and procure sex workers.

An internal investigation began after an anonymous complaint was placed to the DEA.

Dobrich denied the claim to the AP and said he “would have to be an idiot” to try to hire sex workers given the history of the agency in Colombia.

Three years ago, this same office was marred by the news that agents had participated in and hosted sex parties with prostitutes that were hired by drug lords. That led to the former administration’s removal in exchange for the current agents.

Dobrich added in his interview with the AP that he believes he is the victim of an attempt of character assassination.

He said that he had already been interviewed by the Justice Department as part of an internal process. It is unclear whether the U.S. government’s investigation of the claim is still ongoing or if it has closed.

A former Colombian police officer who has worked as Dobrich’s driver told the AP that the allegation does not fall in line with Dobrich’s demeanor and is likely coming from someone who wanted to put his job in jeopardy.

The U.S. government is still investigating a former DEA official who was accused of communicating top-secret intelligence to cartel heads.

Dobrich had previously served in a position of authority overseeing the DEA’s Foreign-Deployed Advisory and Support Team, which has been the subject of criticism for a 2012 operation that left four civilians killed. In a subsequent investigation, the Justice Department found that Dobrich lied about parts of the event to Congress, according to the AP.