Diana Uribe is a Colombian historian and philosopher as well as journalist. I have heard her tell her stories over many years and her talk at the FILBo book fair was one of the most amazing yet

Her discussion of six successful peace processes around the world was not your regular history lesson; this was a lesson in culture, philosophy, music, film, and history, all in one. Diana Uribe has a knack for connecting the dots, and for using popular culture to bring events to life.

In Colombia we hear so many things about the peace talks every day, far surpassing the mere idea of supporting Santos and the FARC, or Uribe and full blown war. Have we really made an effort to get acquainted with what it means to achieve peace? Do we really understand what this, or any other peace process can truly mean?

“To have peace we have to believe there will be peace. There will come a day when we will be able to teach everybody else how we did it.”

She says that the ‘No’ campaign was almost a process of re-instructing the Chilean people in democracy, of showing them what a democratic Chile could look like and using the idea of democracy to empower people. That is how they overthrew Pinochet and began a new chapter in their history. Diana advises watching the film No by Gael García for a deeper understanding.

This relates to attitudes towards peace here: “We Colombians always think we are not capable of transforming ourselves. We do have the ability to transform our story.”

She believes that the country has to stop living this ‘collective fatality’ concept, where war seems to be natural, stressing, “the point is to change the narrative”.

She then crossed the Atlantic, taking the audience to South Africa and its bloody apartheid rule that split a society based on segregation. “This was a deeply unequal society, but not because of social problems, but because inequality was used as a weapon to weaken morale; the oppressed would not even be allowed to learn mathematics; Mandela and other inmates would not be allowed to have their children visit in prison.”

Her message about the need for forgiveness is clear: “After a very long struggle against the ruling system, Nelson Mandela was released. Instead of swearing vengeance, he forgave those who hurt him and invited them to create a new South Africa together.”

Moving on to Rwanda, and Diana shared the moving story of Inmaculée, whose family were killed in the 1994 genocide. She, a Tutsi, then spent 91 days with six other women hiding in a tiny bathroom belonging to a Hutu pastor before being discovered and taken to a concentration camp. She went on to write two books about her experiences and her compassion towards the aggressors. As Diana puts it: “Inmaculée is a young woman who has been able to forgive.”

“As many as one million people were killed and almost 250,000 women raped during the genocide. This, one would think, would also lead to vengeance and more violence. Yet, Rwanda went on to create a constitution which stated that all Rwandans share equal rights. The process also involved swapping arms for computers and training young people in sustainable business initiatives.”

One of the most famous peace processes from recent times is the case of Irish independence. As Diana elaborates, this was a stand-off between “a filthy party and a filthier one, two parties that had been in religious conflict for some 500 years, ten times as long as here in Colombia”.

Related – FILBo: The joy of the written word

“Generations of parents taught their children resentment and vengeance. We cannot let hatred become our identity.” She also recommends several films that illuminate the time known as The Troubles: ‘In the Name of the Father’, ‘The Wind that Shakes the Barley’, and ‘The Boxer’.

She told the audience about the role that women played in pushing for change in Liberia. “Women mobilised through silent nonviolent protests, including sex strikes. They locked their husbands up, they decided they would not lose one more son or husband to war.

“What we have to learn from experiences like these is that people are capable of reconstructing their lives; politicians are not the only ones who can take action, we can all take action,” concluded the renowned journalist.

Diana Uribe drew her captivating storytelling to a close with the civil rights movement in the US and Martin Luther King’s advocacy for nonviolent social change; another excellent example power that people have to control their own narratives.

No peace process is easy. Forgiveness is not easy. But listening to Diana Uribe, and to the way people from different backgrounds have been able to shake off despair and vengeance, rekindled my belief in change. This was also seen in the heartfelt video Diana used to close her talk: We can give peace a chance (Thanks, John Lennon). 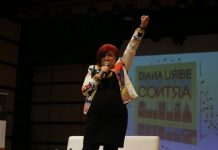 Diana Uribe – Imagine all the movements