Home Entertainment Culture FITB: The Best of Colombia in theatre

The city’s biennial theatre bonanza is upon us with the Festival Iberoamericano de Teatro de Bogotá (FITB) and with so much to see we whisk you through the whirlwind of drama that is set to envelop the capital.

The home talent is ready to show their thespian guests what they are made of.

Unsurprisingly, Colombian tropes and troupes dominate FITB. There are thirty works on offer, covering a wide range of themes and ideas. The Colombian acts run the gamut, from serious to lighthearted, creative to traditional, and suitable for various ages.

One theme is local theatre inspired by universal themes and artists. Under that very broad umbrella we find Cartagena’s exceptional contemporary Colegio del Cuerpo using the work of Nina Simone in Negra / Ánger to look at the issue of discrimination and racism. It played in Bogotá last year to rave reviews. Matacandelas return to FITB with Primer Amor. Beckett’s story of first love could make you cry or laugh, but it’ll certainly won’t leave you cold.

Going further afield, Laboratorio Escénico Univalle take a wry sidewards glance at the idea of tourism through the innovative idea of holidays in Chernobyl in their show El idiota de Chernóbil. The company Medea73, who’ll perform Siete años de silencio, use performers from a range of different companies for their show on immigration and the experience of being a foreigner in a strange land. They also use cutting-edge technology to make an impact. The political hot potato of immigration is strong as well in the play Souvenir asiático from the company Los Animistas.

The Colombian artists take inspiration from various epochs in history. Despite their age, many of these periods resonate with contemporary Colombia. In fact, their historical setting can help avoid political polarisation while still addressing important issues. From Ancient Greece the work Antígona in elixium by renowned company CENIT explores the concept of displacement, for example, and Marranos from Santofilms SAS goes back to the US of the eighties to look at the problems of crime encroaching into legitimate business. Going back to Greece, there’s De sombras y sombrillas, in which Asociación Cultural Hilos Mágicos retell Aesop’s fables through the medium of puppets.

Of course, we all live in the present, so there’s plenty about current hot topics. Máxima seguridad looks at the thorny issue of Colombian jail systems. From Villa de Leyva come Teatro Itinerante del Sol with their show Arikundari vengo caminando y estoy viva, about the need for small towns to have their own voice.

Nothing could be more Colombian than a small town party, and that’s what comes from the Eje cafetero. Lámina y pintura, from Teatro El Paso de Pereira is a carnival on stage, with guaro in one hand and your lover in t’other.

And, though they are not Colombian companies, we have some interesting groups who will be making the country into a stage, with outdoor and street theatre that everyone can go and see. Do go chasing Water Fools, a stunning water-based extravaganza that will function as the closing ceremony. Muaré also promises to be a visual riot – tumblers and the like from the Spanish national ballet clowning around in the Plaza de Toros. It’ll be a circus of fun.

We’ve tried to give you a taste of what’s on offer both here and in the listings section, but go to the FITB website for the full and detailed programme, festivaldeteatro.com.co.

Tickets can be purchased online at TuBoleta.com.co, the official retailer, or in person at the box office of participating theatres.

Please note that dates and times are subject to change, and a minimum age requirement is in place for some shows, so it pays to check online before you get dolled up and head out.

FITB runs until April 1 and has several plays throughout the city, find our recommendations here, or the full FITB program here. 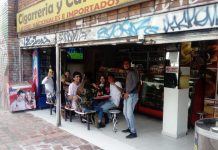 In praise of the humble Colombian tienda