After more than three years of informal discussions, representatives from the Colombian government and the ELN have begun negotiations towards a ‘complete peace.’

At 5pm on Tuesday, February 7, the Colombian government began the public phase of its negotiations with the country’s second biggest left wing guerrilla group, the National Liberation Army (ELN).

“I am going to Quito to begin negotiations with the ELN group that assassinated my father,” he announced. “I accepted the invitation from President Santos because I believe that without forgiveness we will not have peace.”

On the government side, the chief negotiator is Juan Camilo Restrepo. Restrepo has served in a number of roles including Minister of Mines, Minister of Agriculture and Treasury Minister. The chief ELN negotiator is Pablo Beltrán, a member of the central command of the guerilla group.

Restrepo stressed that the teams had not come to the table for further exploratory talks, they came to sign a final agreement to the end of the armed conflict. He repeated the need for “no more kidnapping” several times.

He said, “Every unnecessary delay in the pursuit of peace means the sacrifice of lives and it is time lost to lay the foundations to build national reconciliation.”

The discussions were supposed to start in May last year, but the government would not compromise on the issue of kidnapping and refused to sit down at the table while the ELN were still holding captives.

Most recently, talks planned for October stalled at the final hour because former congressman, 61-year-old Odín Sánchez was still being held captive.

Sánchez, who was released on February 2, had swapped places with his very sick brother who had been held by the ELN for almost three years.

His release – alongside the pardoning of two ELN members by the Colombian government – removed the final stumbling block in the way of the negotiations.

President Santos announced the news during the World Summit of Nobel Peace Laureates, saying: “This clears the way for us to start this other negotiation and to have a complete peace.”

The discussions will follow a similar format to the ones that took place with the FARC in Havana, following a six point agenda that has already been agreed upon. The talks will begin by addressing two themes simultaneously: the humanitarian dynamics necessary to build trust and the participation of society in the construction of peace.

In terms of substance of the discussions, there are a number of ideological differences between the FARC and the ELN which will make these talks different to previous ones. 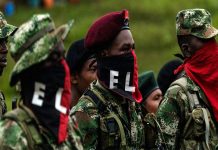