Home Features How will Colombia emerge from its current crisis? An interview with pre-presidential...

After several total lockdowns, a crushing recession, and nationwide protests, Colombia’s next trip to the ballot box is coming up next year. Current president Iván Duque has a disapproval rating of 77%, and by law, he can’t be re-elected in 2022. Álvaro Uribe, former president and the man behind Duque’s electoral success in 2018, is already contemplating right-wing candidates including his eldest son, Tomás. But what alternatives do the other hopefuls offer for the future of Colombian politics?

One potential candidate for the center-left is Camilo Romero. He is running as a pre-candidate for the Alianza Verde party and has a good chance of entering the national presidential race next year due to his political success as former governor of Nariño, a department in southwest Colombia. During his term, Romero gained popularity by opposing the fumigation of coca crops using glyphosate and introducing an anti-corruption initiative.

Romero’s connection to politics began at a young age, when he’d accompany his father to seek votes for local office. According to the national daily El Tiempo, he later organized student movements and, while studying for a journalism degree in Cali, founded a newspaper where students could voice their concerns.

In his current position as a member of Alianza Verde, Romero aims to expand direct democracy in Colombian politics, boost comprehensive tax reforms, and combat climate change with more decisive action.
The Bogotá Post caught up with Romero for an interview in October to discuss his view on the protests in Colombia, what fiscal reforms the country needs, and what he proposes for the country’s future development.

The Bogotá Post: You have been in the political landscape for quite some time. In 2015, you became governor of Nariño, and now you are aspiring to become the presidential candidate for the party Alianza Verde. What political achievement are you most proud of?

Camilo Romero: I believe that more than an achievement, I was able to introduce the discussion and exercise of political innovation. I would call it vanguard to bring new political thoughts and actions to a country like Colombia.

TBP: When you talk about political innovation, what values are you proposing for Colombian society?

CR: We are living in different times now. Each one of us can access an immense world and communicate without borders, directly from our smartphone. This new, connected world gives a modern understanding of citizenship. We’re no longer waiting to watch the news at seven o’clock at night. We are permanently involved, which provides us with an idea about how a government should work for us instead of against us. New citizenship requires a new government.

When I was governor of Nariño, we introduced a social innovation laboratory. We organized a free course with the University of Nariño. Professors didn’t charge for teaching different subjects, and the students didn’t pay a cent. We achieved free education for 15,000 people.

This is an example of an open government, where we collectively decided on urgent projects to conduct in the region. We need such a government, one in dialogue. With new communication tools, we can achieve higher legitimacy by observing the people’s discussions and considering them in decisions. The new political action I propose for Colombia is collaborative and participative.

TBP: Colombia has gone through a series of devastating events recently: nationwide lockdowns, economic recession, and rising poverty levels. What political, fiscal, and economic reforms does Colombia need to exit the ongoing crises?

CR: Indeed, Colombia is living through a social and economic crisis. Before the pandemic, the OECD, the Organization for Economic Cooperation and Development, reported that if Colombia continues as it is, it would need 11 generations to get out of poverty, which is 330 years. Imagine how bad the situation is now.

Colombia needs a change in its political direction, a change in its logic of power. This state and this government need to stop simply seeking the benefit of a few to the detriment of the vast majority of Colombians. This will require a new fiscal moment; as they say colloquially, it requires shuffling the cards. We need guarantees of economic growth for businessmen and women, for trade unions, for entrepreneurs in Colombia, as much as for every other citizen.

TBP: What actionable reforms do you propose?

CR: We need to achieve new tax reform, or better, a real one because there has always been a new one, but no tax reform has brought a new way of looking at taxes so far.

We want a society that abandons the exploitative extraction of natural resources, such as petroleum. Of course, this won’t happen in one day, and natural resources are important to stimulate growth. But we know that the next government has to be a government of change, with the goal of stopping the exploitation of our environment, our natural habitat. While this government of change is being formed, we must talk about the profits of the oil sector in this country. We must talk about the profits of the financial sector in Colombia.

How is it possible that in a year of pandemic, with people dying of hunger, the profits of the financial sector in Colombia were around 11 trillion pesos (US$2.9 billion)?** Where is the social and human responsibility of these sectors?

So, the people are capable of socializing the losses, but they privatize the profits.

**  Editor’s Note: According to Camilo Romero, the financial sector reached 11 trillion COP profit during the first year of the pandemic. According to official statistics of La Republica, the sector made 25 trillion COP between January and September 2020.

TBP: A few months ago, Colombia took to the streets in protest. The revolutionary spirit has calmed down, but people still want political change. Do you perceive these demonstrations as an eminently progressive demand or rather as exhaustion at the current situation?

CR: “Paro nacional” (English: national strike), to me is a very unfair name for what Colombia is going through. It is very archaic and very much of the past. These are not national strikes. These are national feelings expressed in front of an abysmal government.

The country is tired, fed up, and looking for a change. But then, the peaceful protest of young people rejecting violence was attacked in a forceful manner. When the strike gave the impression of turning violent, the Colombian people left the streets.

What is the message being sent? We are ready for a change, democratic and peaceful, and we wholeheartedly reject violence. I am convinced that the country decided to change, to say goodbye to a logic of power represented by Uribe and current President Duque.

TBP: The Colombian Public Prosecutor’s Office admits that 129 people have disappeared, although other investigations put the figure at 470 since the protests began in the country. In total, we had more than 50 dead and 2,000 wounded. What is the role of President Iván Duque in the actions of the police forces?

CR: It is grotesque and shameful what has been done by the national government of Iván Duque, it can only be qualified as criminal. The Colombian people sought change in a peaceful, determined, and democratic way.

Their response was violence, and it came from those who should be the guarantors of the rights of the people. This public force has to win back the respect of the Colombian society, but instead, it has failed the Colombian society. We have seen with our own eyes the repression that was exerted, because cell phones allow a person to be the best journalist.

TBP: On September 14, 2021, Colombian President Iván Duque sanctioned the new tax reform, known as the Social Investment Law, which was approved the previous week by the Congress of the Republic. Is the new reform better?

CR: Former president Álvaro Uribe was capable of labor reforms, which harmed Sundays, the holidays, the working people in Colombia, and increased overtime in this country.

This is the reality of current politics: Let’s give more benefits to those who have everything so that they, in their immense generosity, can give back to the rest of society and generate more work. That did not work. But still, it is the logic they are applying in this tax reform.

An urgent reform would be to eliminate the one made a few years ago, which gave gigantic benefits to businessmen. In this country, an ordinary citizen pays more taxes than a businessman or the richest person.

The next reform has to be a social agreement, a citizen agreement, under the logic of people. Fortunately, many Colombian businessmen are willing to contribute.

TBP: So far, according to human rights organizations, the biggest failure of the implementation of the FARC agreement has been the violence against demobilized ex-combatants, considering that 286 of them have been killed since the signing of the pact. The country also continues to see frequent attacks against civilians and assassinations of local leaders. In an ideal world, would we have the agreement with the FARC as it is?

CR: I really believe that Colombia must advance on a path of total peace, of complete peace, and achieve this total peace.

TBP: So, again, would you keep the agreement as it is?

CR: Some say complete peace could not be achieved because the FARC would take power in Colombia, something absurd.

Do you know what happened to the FARC? They went out to look for votes, and they got the support of 50,000 people in Colombia, in a society of 50 million people. There is an immense distance between the fear they generated and the reality.

If something has to be done for peace in Colombia, it is to stop lying. We need to say things as they are. What danger is it going to represent for democracy that the armed group that entered a democracy gets 50,000 votes?

All we have to do is to open democratic spaces, and carry out an urgent and necessary educational exercise; comply with that peace agreement, and fully comply with it.

TBP: The international climate change agenda is not very present in Colombia, even though Colombia is one of the highest-risk countries, suffering from droughts, extreme weather, and pollution. What’s your take on climate change policies?

CR: I have heard several alternative presidential pre-candidates saying that this is not a problem here, that this is a problem of industrialized countries; but no, the logic is different. You can tell me that Colombia does not contribute too much to global greenhouse gases, according to statistics. But it’s not about comparing yourself with others. We have a responsibility for the environment, no matter where we are and what percentage we contribute. Nature is a subject of rights, and we have to protect nature legally and institutionally.

We need to practice by example and give lessons to the world. In Nariño, we created the Secretariat of Environment and Sustainable Development. We achieved an integral territorial climate change management plan. This does not exist in any other department. We made public policies in favor of the environment, recognizing the rights of nature.

TBP: The Colombian peso recorded a devaluation of about 11% in 2021. What are the reasons for this inflation, and what are the appropriate economic and political responses?

CR: I insist it is a consequence of the prevalent logic of power: Inequality. We are an unviable country with millions of people living in poverty: 42% of Colombians live in poverty, 15% live in extreme poverty.

We had to grow up with the pandemic. We are facing a much harder reality now. I have a clear idea that this will not change unless we change the logic of power. 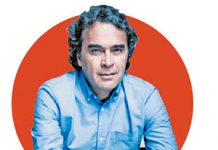