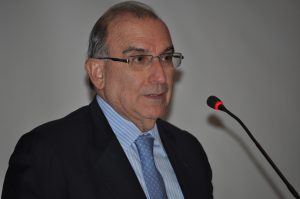 Leading peace process negotiator and former vice president Humberto De La Calle will be on the ballot for the 2018 presidential elections.

In a tight election with low turnout, De La Calle won 49% of the vote and defeated opponent Juan Fernando Cristo, who charmed 43% out of the 744,521 voters who participated.

In a presidential race with a record-setting 53 presidential candidates, Humberto De La Calle stands out as a candidate with the full support of a major party. The current favourite is Germán Vargas Lleras, who resigned from the vice presidency in order to run for president with the support of a coalition between the two major political parties: Partido de la U and Cambio Radical.

The elected Liberal candidate has a long political history. Since the 1990s, De La Calle has also acted as Minister of the Interior, Minister of Government, Ambassador to UK, Spain and the OAS, among other high-ranking positions in the Colombian government.

He was also Vice President of Ernesto Samper’s administration; after the ‘8000 process’ scandal revealed that drug money from the Cali Cartel had funded Samper’s campaign, De La Calle resigned to distance himself from the political turmoil surrounding the president.

De La Calle based his early campaign on his success as chief negotiator during the FARC peace process from 2012 to 2016, and his staunch support for the current form of the agreement in the face of political factions seeking its renegotiation and modification.

Another pillar of his candidature is the defense of the ongoing peacemaking in Colombia, distancing this process from its right-wing association toward a collaborative effort across parties. The Liberal candidate seeks to form alliances with left-leaning politicians like Clara López, presidential candidate for Partido Verde. Such coalitions might include consolidating support for a single candidate among several parties.

De La Calle is a practicing lawyer and prolific writer, as well as a self-proclaimed atheist—a rare trait among politicians in Colombia given that the country has one of the largest Catholic populations in the world.

Opponent Juan Fernando Cristo, who currently acts as Minister of the Interior after a diplomatic career as Senate president, Consul General of Venezuela and Ambassador to Greece, has vowed to remain in full support of the party.

Cristo submitted his resignation for his position as Minister in May 2017, so he could still participate in the presidential elections. He has stated that he will continue working towards the successful implementation of the peace process with the FARC, regardless of election results. 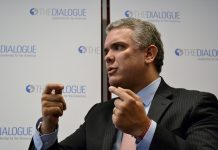 What does Iván Duque mean for peace in Colombia?