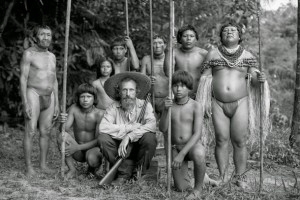 Colombia’s latest cinematic offering, El abrazo de la serpiente, has been met with incredible acclaim here and abroad, after winning the prestigious Art Cinema award at the Cannes Film Festival, much to the surprise of director Ciro Guerra.

Speaking exclusively to The Bogota Post, Guerra explains, “Los viajes del viento was a very personal film and it dealt with a lot of personal issues – family, culture, identity. So for the following project I wanted to take a journey to the unknown! For a Colombian there is nothing more unknown than the Amazon – it’s half the country but we don’t know much about it. I wanted to search for new ideas. In that process I discovered the journals of the first explorers in the Colombian Amazon and I thought they were fascinating, they gave me a story to work with.”

Inspired by the journals of Dutch explorer Theodor Koch-Grunberg and American Richard Evan Schultes, Guerra weaves together a magical, fictional journey through Colombia’s Amazon – the first to be shot in the region for the past thirty years. The director wanted to use his own organic style of working, connecting together the stunning landscape with the threat of colonialism ravaging the jungle setting.

Guerra tells us, “We didn’t want to try to bring the logic of a foreign-style film production into the Amazon, we wanted to be very respectful towards the jungle.”

The plot is based around the sacred but fictional Yakruna plant, taken from ‘elements of different sacred plants’. As the explorers descend into a feverish madness, the viewer witnesses the destruction from rubber tapping and Catholic missionaries first hand whilst accompanied by a shamanic guide, whose long years in the jungle see him escorting both explorers, many decades apart, with vague memories and flashbacks following the ageing shaman.

The film offers a melting-pot of cultures that shine through the storyline, contrasting white European explorers with indigenous communities. Shooting the project meant that cast and crew had to juggle a wide range of languages and customs.

“The indigenous people that we worked with do speak Spanish as their second language,” explains Guerra, “but they felt much more comfortable acting and expressing themselves in their own languages and dialects. So we wanted to respect that.”

Guerra clearly wants both European and Colombian audiences to take away from his latest project, and he hopes people will adopt the ‘Amazonian way of seeing the world.’

“The film transports the audience. It projects a way of thinking which has been protected throughout history. I think it’s very important for us.”

The Bogota Post’s film critic Jazid Contreras has his say:

Some call it ambitious, others call it pretentious. A lot has been said about El abrazo de la serpiente, a feverish cinematic journey through the Amazon rainforest directed by Ciro Guerra, who has made a name for himself internationally for his daring and sophisticated style. Time will tell if this movie is an embarrassing flop or an instant classic, which seem to be the only two possibilities that most critics in the local cinephile circles are offering. Whatever the case might be, it’s a must-see film. 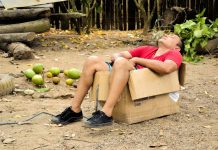