Nestled at the foot of a small hill in the locality of Rafael Uribe Uribe, on the banks of the Chiguaza River is the tiny neighbourhood of 870 people of Los Puentes. Because of this peculiar geography, the neighbourhood is relatively isolated from nearby working class barrios and, since it creeps up the hill, is visible from large swathes of the southern part of Bogotá.

These features, alongside the community’s eagerness to participate, made it a perfect candidate for the city’s first macro-mural project. Close to 400 houses were painted over the course of two months to create a striking piece of art that is best appreciated from a distance.

Private and public funds were necessary to make the project viable. The paint was provided by Orbis, paint company Pintuco’s charity organisation, while logistics were provided by the housing secretariat as part of the alcaldía’s (local council’s) broader intervention plan carried over from the administration of former mayor Gustavo Petro.

However, it was the graffiti artists and most importantly, the community, who got to work to brighten up the neighbourhood by way of colour and art. The artists tasked with this massive project were the graffiti collective Ink Crew who have been active in the city for years.

At the unveiling, which took place on June 3, Ink member SKORE explained to The Bogotá Post that they were chosen for the project through their “reputation for painting on the streets.” Fellow crew member DEXS added: “We also worked with the previous administration on murals in Ciudad Bolívar and other areas. We have been painting for over two years in different localities. But nothing like this.”

They acknowledge the project was a challenge as it was the first time they had ever done something like this on such a large scale. In order to complete the project, the collective moved to the neighbourhood while working on it, creating a bond with the community, especially its youngest residents.

“The children will be the ones taking away the coolest results. They were the ones who learnt the most. They helped us with the whole process, and when they weren’t there we would go looking for them so that they’d come help us,” stated DEXS. Indeed, the many kids wandering the neighbourhood with brightly coloured paint on their clothes was testament to this.

The design, entitled El Río de la Vida, was chosen in consultation with the community. DEXS explained: “We asked residents to give us words or phrases on what the neighbourhood meant to them, and we recreated them in the mural.” The result of this brainstorm was the fitting image of a young woman drifting on a canoe, alluding to the Río Chiguaza that flows in front of the neighbourhood.

However, it wasn’t always easy to convince the residents to have their houses painted. It was an exercise of trust, as many houses ended up painted in multiple colours that didn’t necessarily make sense in isolation. The residents were essentially giving up their private space for a public project, and on the way, this exercise led to lots of community building.

The project was more than just a splash of colour on the walls. Rather, it managed to engage the community and generate conversation and a sense of belonging. Working in colour was seen as more than just sprucing up the neighbourhood as it generated the right conditions for community, safety and co-existence in the barrio.

Immediate changes were seen as soon as the project was finished, as the residents started taking better care of communal spaces. A neighbour commented: “Through this project, the community is more united and the neighbourhood is much prettier. Before this, the neighbourhood had garbage everywhere, and now it’s very clean.”

One Los Puentes resident who has taken it upon herself to make the neighbourhood better is María Dilma Lozado, known by locals as La Profe. She runs a Sunday school for local children. Because the children are so fond of her and are often in her home, it was her house that was chosen to host the community library. As of now, there are only a few books but she hopes it will grow with the help of more donations.

Lozado sees her yellow and white house, which she claims “is the prettiest of them all”, as a place where local children can come to better themselves. “When they first started coming here, they used terrible vocabulary and they fought each other. Little by little they have been changing. They know now that in my house they’re not allowed to use curse words.”

By opening her home as a place where they can do homework and read, she hopes to save the kids from falling into drug addiction, a problem that affects many children as they grow older in Bogotá.

During the festivities that accompanied the unveiling of El Río de la Vida, a number of residents of Los Puentes received their certificates after completing a variety of skills training programmes. Among them was Lozado who received a certificate for food handling so she can run her small business selling jelly and salpicón.

The training programme was an integral part of the Habitarte project. Housing Secretary María Carolina de Castillo explained that “muralism and training helped generate a basic social fabric. The project allowed us to go into homes and identify specific needs. For example, we could identify if any services are lacking.” She continued, “we then make the project sustainable through the training process. The idea is to have more employable people from the skills they have learnt through this project.”

At the unveiling, Mayor Enrique Peñalosa announced that the strategy was to continue with similar projects on a total of 65,000 facades in Ciudad Bolívar, Usme, San Cristóbal, Usaquén and elsewhere. The first phase will be in neighbourhoods in the hills, prioritising communities that would like to participate.

DEXS told The Bogotá Post that Ink Crew would be involved in the next phase as well: “We don’t know where it will be yet but the plan is to paint 500 houses. We’ve learnt a lot from this experience here in Los Puentes and we’re going to use that knowledge for the next project. Each time we’re improving on what we’ve done before, so the next one will be even better.”

The irony of seeing the grafiteros working with the Peñalosa administration was not lost on them. “The alcadía contradicts itself,” explained DEXS, referring to the fact that the administration has taken a hard line on unauthorised graffiti. SKORE wore a shirt to the event bearing the word “ilegal” as a form of protest.

“After this event,” he told us, “I’m going to go out on the streets and do some ilegales. That’s what we do, where we started.” Nevertheless, the artists are taking the opportunity as it comes. As DEXS explained, “In the end we’re coming out on top here. We would never have had the resources to do something like this so we have to look at the positive side of this project.”

If you have any children or youth books you’d like to donate to the community library, please get in touch with us at [email protected] 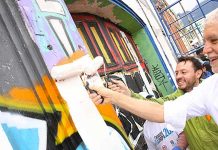