Home Entertainment Culture The many faces of Alejandra Borrero

Alejandra Borrero is an acclaimed actress, outspoken campaigner and changemaker who manages to combine performance art with social consciousness speaks about pain and uniting society.

Alejandra Borrero is many different things to many different people. Some recognise her as the acclaimed actress who set daytime television screens alight for nearly 30 years with roles in over 40 different telenovelas. She’s also managed to turn heads with captivating performances on stage and in film. For others, she’s seen as an integral cog in the vanguard of social progress in Colombia. She was among the first high-profile performers in the country to come out as openly lesbian, something made exponentially more difficult by her conservative upbringing. Borrero has erased stigma after crippling stigma, and in doing so she has provided a voice for those who have struggled to find their own on a litany of social issues.

A few weeks ago, she made an appearance on Radio Caracol’s Dos y Punto where, during the show’s celebrity karaoke segment, she offered an emotive rendition of the Luz Casal hit, ‘Piensa en Mi.’ The song, whose lyrics just about beg its faceless muse to keep the singer in their thoughts – particularly in unpleasant moments – was a fitting choice given Borrero’s past and present. “I believe that we were put on this planet to learn from moments of pain, and there are moments in my life that are really painful. It’s a song that touches my soul deeply and reminds me of difficult moments in my life,” she says.

“Art opens doors to questions and discussions and makes us cognisant. The thing that matters most to me is that these issues are brought out from under the rug.”

One such moment came about while Borrero was busy with the production of the 1989 telenovela, Azúcar. The cast, who routinely travelled to and from Cali for filming, followed an itinerary identical to that of the infamous Avianca flight 203 a mere day after its explosion. The bombing was just one incident in the country’s 50 years of conflict that resulted in scores of casualties among innocent bystanders. The near-miss hit close to home, and Alejandra recognised the need to help repair her country’s badly-damaged social fabric. Years later, she would begin the healing process on stage.

To do that, Borrero would need a space – a laboratory of sorts – in which she and other members of the community could come together and experiment. So began Casa E. Originally known as Casa Ensemble Creative Laboratory, the house-turned-theatre quickly became a space where nothing was off-limits and everything was ripe for exploration. “I founded it because I wanted to take on a work of theatre that I’d never touched on before,” said Borrero. “I wanted to have a space where I could showcase new works while also taking everything that I’ve learned that’s made me a successful actress and teaching it to others. I wanted to create a small school, and we ended up stumbling upon this fantastic house.”

The house quickly became a factory, using artistic, pedagogical, institutional, and communicative inputs to churn out heralded play after heralded play for nearly a decade. Among them was Victus, a production that debuted in May of last year, which sought to mend a half-century of wounds by tackling Colombia’s armed conflict head-on. In it, Borrero brought together all kinds of people who had been affected by the conflict – ex-FARC, paramilitary, police, and military members, as well as civilians that were displaced or that had lost loved ones – and used the stage as a platform to collectively tell their story. “Victus is, perhaps, the most important and serious work I’ve undertaken in my life,” she noted. “The idea was to do something absolutely new and unique. In this sense, we had to work a tremendous amount – more than I or any of us ever had before.”

The work was far from easy. Melding so many different perspectives into a polished piece took hours and hours of honest dialogue – a task made trickier by characteristically tight-lipped police and military cast members. Rather than taking sides or even attempting to act as a moderator, however, Borrero used one of her own mantras to catalyse the cast: ‘There’s no one better than me, there’s no one worse than me.’

“For most of those involved – myself included – there was a common sense that ‘Little good has happened to me in life,’” she explained. “In acknowledging that we’ve all experienced struggles – that there’s nobody better or worse off than the next, it really helped us to come together. We came to see one another as siblings, despite the fact that I may have been standing next to someone that violated my dignity or the dignity of my family.”

That ability to unite amidst differences in backgrounds has given Borrero optimism, not only for the prospects of reconciliation in a country that has largely only known violence, but also with respect to another issue that she has come to champion: awareness of violence against women. Citing the armed conflict as a major factor, she pointed out that the people who are often most vulnerable also tend to be the weakest, whom, she says, are typically women. This, in turn, Borrero notes, has created an unequal playing field between men and women in Colombia.

“A major part of the reconciliation is creating a new way in which women are perceived and creating a mechanism through which we can all speak freely about the current state of things without fear of reprisal.”

“Women are often objectified here by men that think they can do whatever they want with us. In that sense, a major part of reconciliation is creating a new way in which women are perceived and creating a mechanism through which we can all speak freely about the current state of things without fear of reprisal.”

It’s in that spirit that Borrero launched ‘Ni con el pétalo de una rosa,’ a week-long festival coinciding with International Women’s Day, as a way for women and men in the community to come together and raise awareness about the gender-based violence epidemic. Each year’s festival is made to stand out from the one before it so as to keep refreshing the way that violence against women is discussed. This includes addressing the problem at its root.

“In the last one, we worked with men to try and change the perception of what it means to be a man. Men suffer what are known as the three P’s, which are the burden of being a protector, a procreator, and a provider. In Colombia, if a man is not one or more of those three P’s, they’re not considered a man. That mentality then leads to its own set of problems.”

Changing that and other harmful value systems is much of the reason that Borrero has put such an emphasis on performance work within the walls of Casa E and in awareness events like ‘Ni con el pétalo.’ “We work through the lens of art to change things. Art opens doors to questions and discussions and makes us cognisant. The thing that matters most to me is that these issues are brought out from under the rug. We have to put these issues on the table for discussion, and art is a great way of doing that.”

Finally putting those issues on the table is a lot easier said than done. Engaging in dialogues that unearth reminders of dark experiences – past and present – will certainly be painful. Yet for Alejandra Borrero, someone who has spent her entire life being different things for different people – deftly balancing performance art and social consciousness – such prospects are more than welcomed. She’ll be the first to remind you that we were put on this planet to learn from moments of pain. 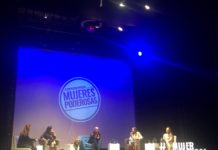