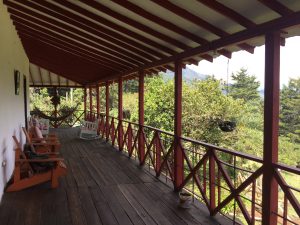 Don Carlos Monzon sits contentedly in his office on the bottom floor of Hacienda Media Luna, a majestic 160-year old coffee homestead perched high up on the Eastern mountains of Medellín. The simple act of sitting peacefully in his office is a privilege that he knows more than anyone not to take for granted.

Hidden amongst the forest of pines, eucalyptus and Colombian natives that cover the slopes leading up to Santa Elena, the magnificent colonial-style Hacienda has been in Don Carlos’ family for over five generations. However, it almost came to a tragic end in the late 90s at the height of Colombia’s turbulent past when he was forced to take his family into exile in the United States. 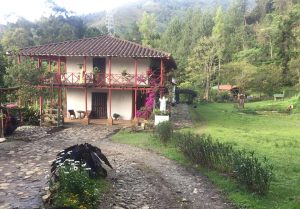 Built in 1853, the Hacienda is one of the oldest of its kind in the country and is a working example of 19th century Colombian cafetero architecture. It was the first Coffee Hacienda in the region to be granted a licence by the Federacion Cafetero Antioquia and is the second biggest in the department. The immense size of the finca’s land at its prime was an enormous 200 hectares and comprised all the land down to modern day Buenos Aires, making up the current barrios of 8 de Marzo, Jesus, and Juan Pablo II. The old entrance of the finca was known as the Puerta Inglesa and still exists today next to the famed Las Mellizas street in Buenos Aires.

Fast forward a few hundred years and the present-day entrance lies just a stone’s throw from the Hacienda itself. An unassuming wooden gate guards the opening to a stone driveway flanked by two enormous cypress trees each one draped with long spirals of Spanish moss that cascade down mystically like Gandalf’s beard. The magnificent trees were planted way back at the same time when the Hacienda was constructed in the mid-19th century – to look up at them through the silvery curtain of Spanish moss is like looking into the depths of Narnia. 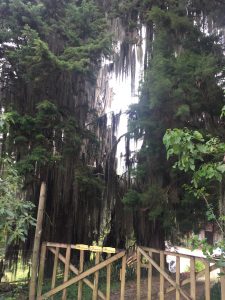 The Hacienda itself exudes a colonial ambience not dissimilar to the grand plantation houses found in South Asia during the British Raj or Indochina during French rule. Set in a clearing in the forest, the grounds surrounding the Hacienda are dotted with citrus trees, vegetable patches, an ornamental fish pond, greenhouse, coffee shrubs and banana palms. The imposing two story structure has impressive 3-metre high ceilings and a sweeping wooden porch that wraps entirely around the hacienda, the notable width due to its traditional use for drying coffee beans. The view from the elevated, second-floor porch overlooks the gardens, paddocks and forest all the way down to Medellín – watching a sunset from here over the barrios and mountains behind is like arriving back at your table in a restaurant to find your food waiting – blissful in so many ways.

Unique at the time due to the use of wood, stone and tapia (compacted mud bricks dried in the sun) over not one but two levels, the choice of construction material indicates the high social standing of the families that inhabited the Hacienda. Houses of the working class and other coffee haciendas were typically made instead of Bahareque, a pre-Colombian form of construction using intertwining wooden sticks covered in mud. 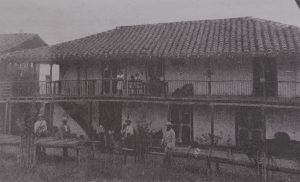 Also known as the Hacienda San José, it was an important hub due to its geographic location between Santa Elena, Medelín, Rionegro and Marinilla. Throughout the years, the building and surrounds also served as a social centre, house of worship and even casino for playing cards, dominos and the popular Colombian board game of parques. It was one of the largest coffee fincas in the Aburra Valley, and at its peak, there were around 150,000 coffee plants spread across the 200 odd hectares. Coffee continued to be grown throughout the 20th century and is still grown and harvested there today, albeit on a much smaller scale.

However, as the situation in Colombia continued to deteriorate during the 90s, Don Carlos had actually put the family heirloom up for sale but was unable to find a buyer – in hindsight, a huge blessing. Instead the house was left in the hands of an administrator whilst the family was in exile in the US, leading to a steady decline. 15 years of neglect and poor administration including the use of the bottom level as a holding pen for cattle left the beautiful Hacienda in a sorry state until the third of Don Carlos’ sons Andres Felipe returned from the US determined to resurrect the crumbling house and his memories of childhood. Under Andres, the Hacienda began life again as the home for the Fundacion Campos de Gutierrez, an International Artist Residency program that brings foreign artists to Medellin to develop projects and link with local artists for an interchange of ideas, workshops, and exhibitions. The project won the scholarship for cultural patronage of Medellin by the Medellín Council in 2015.

It doesn’t stop there however as the story of Hacienda Media Luna’s resurgence continues to be written today. 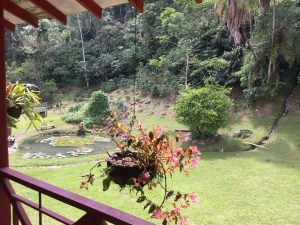 Esteban, the second of Don Carlos’ four sons arrived back in Colombia at the beginning of this year and is reviving the Hacienda’s cafetero origins through tours of the coffee farm and the bucolic gardens around the magnificent building. The tours include coffee tasting, harvesting and a hike around the large plantation. By far the closest coffee farm to Medellin, a visit to Hacienda Media Luna is like being propelled into the very heart of the coffee triangle but all within 20 minutes from Centro.

As a new era begins for Colombia so too does it for Hacienda Media Luna and the Monzon family. The Colombian cafetero culture lives on here and Don Carlos continues to sit contentedly in his office on the bottom floor just like his family has for generations before.

“The house has been true poetry not only for me, but for the whole family” — Don Carlos

Enquiries can be made on 302 4551437or by visiting their website: www.lacasagrandecoffeehacienda.com