Home Uncategorized Not All Rosy

When you send a letter from a post office in Bogota to the United States, it takes around three weeks – sometimes more – for it to arrive, tattered and torn, in your receiver’s mailbox.

Next time, send flowers instead.

It takes flowers three days to journey from a field north of Bogota to a supermarket shelf somewhere in the United States – and whether it’s in Boise, Idaho or Manhattan, New York, you’ll find pristine roses and carnations with crisp petals, ready for the next boyfriend hoping to rectify his mistakes or daughter preparing for a Mother’s Day brunch.

The odds are, if you buy flowers in the United States, they’re from a little place like the spot about an hour and a half northwest of Bogota. It’s called Facatativa, where lush, green valleys receive constant sunlight and regular rainfall. It’s a setting perfect for flower cultivation, and Colombia subsequently ships more than US$1 million in blooms – the second largest producer in the world – and controls more than 70 percent of the US market of cut flowers.

But this industrialization of flowers has come at a price. Just ask one of the some 130,000 workers – most of whom are women, a third of them single mothers – who labour away in these fields, with virtually no union protection; only two unions exist in the entire industry.

How can so little protection exist for an industry as big as the flower industry, which employs more than 130,000 workers, plus the 10,000 extra seasonal hands brought on for Valentine’s Day and Mother’s Day? It all makes sense when you look at the figures. According to the International Trade Union Confederation, about 55 percent of trade union deaths in the last decade took place in Colombia – ranking it the most dangerous country for trade unionists in the world.

Right now, only about 12 percent of Colombia’s flower workers are unionized. For the women workers who lead this industry, life is tough. Many are heads of their households – the work provides independence and the opportunity for social mobility. But because they are so reliant on their income – remember that a third are single mothers – many put themselves at risk of exploitation.

And in this industry, where pesticides are a crucial element to success, that exploitation can lead to major health risks for disenfranchised workers. Oxfam Colombia reports that two-thirds of workers in the industry suffer from illness directly related to pesticide exposure. The sickness ranges from mild nausea to, in the most extreme cases, miscarriage and death.

There’s no question that this industry’s success is thanks to some of the country’s most vulnerable – not only single mothers and pregnant women but, up until at least the mid 90s, child labourers. As recently as 1994, nine year-old children were found pulling Saturday shifts while children 11 and older could be found in all areas of production.

Planting, cultivating and exporting billions of flowers annually also puts a real drain on a crucial natural resource – water. Bogota receives more than thirty inches of rainfall annually, but the production of a single rose can use up to three gallons of water. And with Bogota’s rapid expansion and a recurring problems with drought in other regions of Colombia like La Guajira, the need for this vital resource will only rise in the coming years if current trends continue.

As American consumers grow increasingly interested in where goods come from and how they’re produced, pressure has been put on the flower industry to seek a more sustainable approach. Farms belonging to Asocoflores, a voluntary association for flower exporters, have begun to replace the hazardous chemicals used in flower production with less harmful substances. Additionally, the industry has created ‘Florverde’, a certificate program aimed at increasing sustainability and safety for its workers.

Following these initiatives, some flower companies in the country have found ways to conserve water and improve employee working conditions – but unfortunately, without any government oversight, it’s still at the owner’s discretion. Some flower facilities are top notch places to work, offering everything from safe conditions to a subsidized lunch. For the workers employed in one of these companies, life is good.

Others, with roses and carnations in hand, still wait for change. 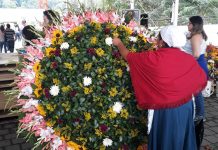 Medellín blooms into festival of flowers

The Korean connection, Colombia in the korean war

Top stories of 2015: The odyssey of Natalia Springer