There’s only one Obituary to be written for Rock al Parque 2017-Sunday and they were on stage. Along with H2O, Rolling Ruanas, Los Caligaris, Estado de Coma, Zhaoze, Rompefuego, Blessed Extinction and Carnivore Diprosopus the park was pulsing with awesome riffs, staccato blastbeats and good ol’ fashioned metal.

So Rock al Parque 2017-Sunday. Day one avoided disappointment and delivered the goods – what of day two? It’s quiet again – numbers seem down on previous years. However, those that came were rewarded with some excellent sets from less known artists. Obituary might have been the only BIG FUCKING NAME, but not everything hinges on reputation. Colombians especially lit up all three stages with homegrown talent in abundance (what’s a bun dance?).

4.30pm is wacky hour. The Rolling Ruanas play the third stage and Los Caligaris play the second. The rolling Ruanas are the better of the two. One trick, but it’s a fucking good trick and festival-afternoon perfect. Right band, right time, wrong place. These guys should be on one of the proper stages.

Los Caligaris, on the other hand, are awful. Even by Argentinian musical standards. It’s a checklist of tired tropes that say “I’m crazy, I am.” Those people never are actually crazy. Caligaris muck about like chimps with ADHD. In a circus. I’ve had toilet experiences more musically rewarding and enjoyable. Mind you, the crowd seems to like them.

Making it worse, Estado de Coma on the main stage are ripping it up. Two singers, or rather two shouters, a metric fuckton of noise and a crowd that want to feast on your mother’s soul. Manic mosh pits are the band’s reward for a blisteringly intense set. It’s just that people generally prefer the shit on the second stage. Right band, wrong audience. Backstage, the caleños talk about the importance of lyrics, saying “We don’t sing just to sing. It’s about giving our two cents and commenting on what we see in society. Our lyrics are socio-political, always, and with our lyrics we talk about the problems not just of Cali, but all Colombia and all of Latin America.” They say that the hardcore scene in Cali is tight, which is why it produces so many good bands. “It’s a hot climate, not everyone likes this type of music. There is some stigma, but there’s a lot of diversity, some very good bands, which really helps us.”

Zhaoze are the first Chinese band ever to play Rock al Parque. It’s a brave booking – experimental ambient rock at half five. Probably would’ve been amazing in a tent, but coming on after the Ruanas feels somewhat flat. Right band, right place, wrong time. Still a good way to calm down and relax a bit. The kids toking away at the back have the right idea – this is drug music.

Rompefuego are the next band to suffer a lack of interest at Rock al Parque 2017-Sunday, playing to a smaller crowd than their eclectic sound deserves. Over on the main stage, things are kicking off with H2O. Still angry after a quarter of a century, their hardcore sound is wasted on many of the VIP crowd. Singer Toby Morse leaps down to touch some skin with the kids to keep things intimate. It’s a touching sign of how underground, intense music should be – personal and passionate.

H2O singer Toby Morse leaps down to touch some skin with the kids to keep things intimate. It’s a touching sign of how underground, intense music should be – personal and passionate.

H2O aren’t happy backstage, as Toby says, “That was the biggest barricade we’ve played behind. The kids were, like, at the end. That was kind of hard, because our songs are about connecting with the crowd, singalongs and that sort of thing. That’s why I went down there.” Pissed off with the social division he may be, but he also points out, “The crowd was amazing, though. We’ve never experienced anything like that in our 22 years as a band. Nothing that big, that intense. Colombia always brings the passion.”

Following them on the stage are Blessed Extinction, who have a pleasingly full sound to go with some awesomely huge riffs. By the time they end with a cover of ‘Raining Blood’, the audience has been battered into submission.

After that come Carnivore Diprosopus who have come back to level Bolívar park to the ground. Singer Oscar Macias says he’s proud to have brought the Colombian flag to every part of the world. Carnivore Diprosopus, controversially, left Colombia to develop their sound in Spain. Macias points out that, “You can grow as a band in your country, of course, but it’s a different magnitude when you are in another country.”

Around him, staccato blastbeats rifle across the park as fast as the laser lights accompanying the show. Macias jerks robotically around the centre of the stage, evoking the terminator. It’s impossible to take your eyes off him as he embodies the savage hacking rhythm inside himself, an avatar of the music behind him, literally making it flesh and blood (or should that be wires and metal?).

Finally, the Rock al Parque 2017-Sunday big fucking headliners kick off. Florida death metal titans Obituary are really fucking huge too. Not just bassist Terry Butler but the sound. Obituary have always sounded like Obituary, referenced in the backstage chat where drummer Donald Tardy tells us, “I don’t know how we stay relevant. We just keep doing what we do, musically. We just play Obituary type music. It’s all about the riffs. We love metal, old bands are where we come from, Black Sabbath, Ronnie James Dio and so on.”

He’s not stuck in the past though, saying that “I would marry Chris Adler [from Lamb of God] if he would let me.” He’s interested in contemporary bands, “There are a lot of new metal bands”, before being corrected by Butler, “sorry, newer, not nu-metal, who are doing a great job at what they do. We’ll stick to our thing, we’re good at what we do, we have no business doing blastbeats or anything outside of our box.” Despite this, that sound moves about – Obituary can switch from speed to sludge in the blink of an eye and are equally adept at both.

This is the purest of the pure Florida Death Metal, influenced by all the retirees in the Sunshine State, wandering about half dead and waiting for their miserable existence to end. Hair, noise and roaring – a perfect metal headliner. Like H2O, they complain about the stage setup, “the people were too far away, because of the way the festival is set up”, says drummer Donald Tardy, “but, no, it was good, a killer show.” By the time they finish on an almost unbearable barrage of feedback, our ears are ringing and our souls have been fed.

Many are writing an obituary for Rock al Parque this year due to the perceived weakness of the lineup. Obituary themselves just wrote another page in the history of really good headline acts killing it on a Sunday night. 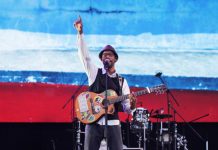 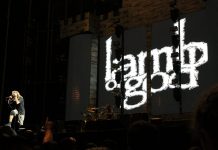