Home Analysis Santos says war on drugs is not working 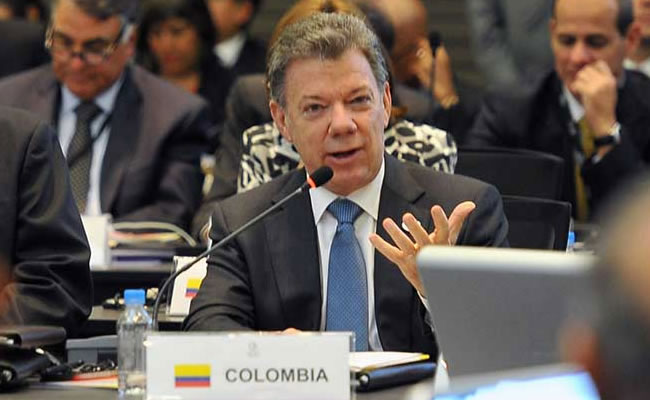 In recent years, Colombia has been a leading voice in saying that the ‘war on drugs’ is not working. Elly Darkin investigates some of the issues that will be discussed at an upcoming UN drug conference

“The ‘war on drugs’ caused the international community to prioritise prohibitionist policies over sustainable development at a terrible socioeconomic cost.”

So says the introduction to a 140 page policy report entitled ‘After the Drug Wars’ from a group of experts at the London School of Economics (LSE). President Juan Manuel Santos is the lead signatory of the paper, which is appropriate since he, alongside Nobel Prize winners and civil society groups, has been leading opposition to the ‘war on drugs’ for some years. So what are their criticisms? And what alternatives are on the table?

The report was published in advance of the UN General Assembly Special Session on Drugs (UNGASS) in New York on April 19-21, where the 193 member states will join what commentators believe will be a significant discussion about changing the international approach to drugs.

As early as 2011, Santos told international media, “The world needs to discuss new approaches”. He went on, “We have lost our best judges, our best politicians, our best journalists, our best policemen in the fight against drugs and the problem’s still there.”

The president has used similar words in a number of speeches since, consistently arguing that countries like Colombia are paying in blood for a war on drugs that is not working.

He acknowledges that for half a century drug production and trafficking in Colombia has fragmented society, infiltrated politics and fueled civil war. On top of that, the number of drug users continues to grow.

Ever the careful politician, Santos has been working to build international consensus, especially amongst other drug producing countries. He urged leaders in at the  CELAC (Community of Latin American and Caribbean States) summit at the start of this year to work together to find a common, analytical position. At a drugs conference the next day, he stated again, “If we haven’t won after 40 years, it is because we are doing something wrong.”

And it is paying off. Santos’s criticism is shared by figures such as Kofi Annan, other Latin American presidents and business leaders such as Richard Branson, as is his call for an alternative. The April UN meeting was originally due to be held in 2019, but pressure from Colombian, Guatemalan and Mexican leaders has moved it forward. 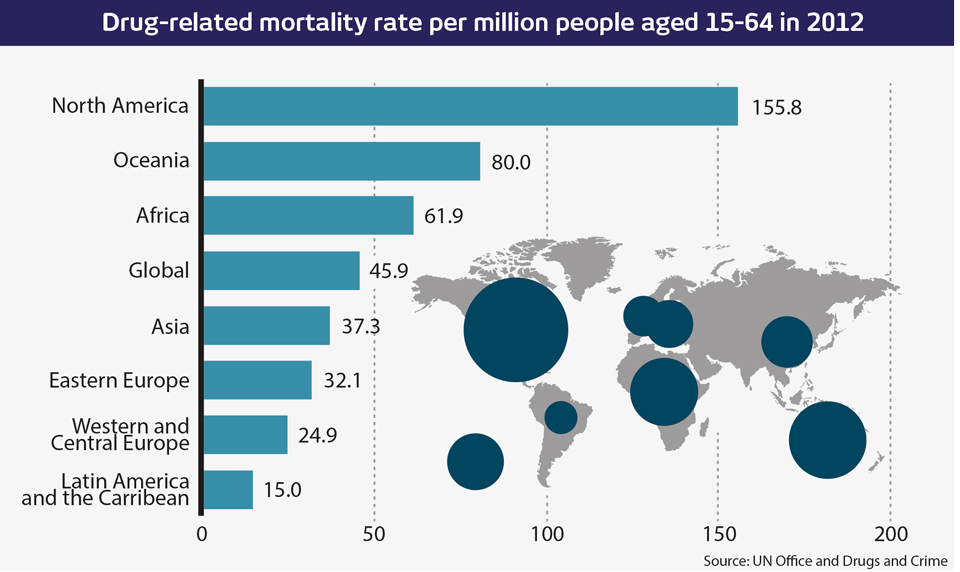 The LSE report argues that the ‘war on drugs’ has been a costly failure, fuelling HIV and Hepatitis C epidemics, restricting access to essential pain reliving medicines, justifying unfathomable levels of violence and incarcerating millions.

It proposes treating the issue of drugs as a development issue, saying: “Prohibitionist policies must now take a back seat to new, comprehensive, people-centred goals”. Amongst other things, it also advocates an emphasis on health care and harm reduction.

Such measures are a dramatic departure from the past and even further steps are expected from the Colombian delegation to UNGASS this month. Justice minister Yesid Reyes has already indicated that he will be pushing a decriminalisation agenda. “We propose alternatives to incarceration,” he told The Associated Press, and pledged to create alternative development programs that do “not prosecute small farmers but involve them in the development of legal crops.”

For Santos, rubbishing the ‘war on drugs’ has been more than just rhetoric. His government’s proposals for real alternatives to prohibition have borne fruit. In May 2015, the Commission on Drug Policy proposed an end to the aerial spraying of coca fields. A few months later, the President signed a decree legalising the growing and sale of medical marijuana.

The challenge is that there is no simple solution. Drug production and consumption are not isolated issues, but rather exist within a complex international web of problems such as poverty, exploitation, violence and corruption.

If you take the question of coca production, one section of the LSE report points out that the people growing coca have few viable alternatives and, until they do, policies that focus on stopping production will only harm vulnerable populations.

According to the UN, there are at least 300,000 people living in 65,000 Colombian households whose livelihoods depend on the cultivation of coca. Where counter-narcotics operations deprived these small-time farmers of their key source of income, reforms could see the state finding ways to offer them legal work.

In Colombia this is closely connected to the peace process. Negotiators in Havana have already come to an agreement with the FARC on the topic of drug trafficking. This was one of five points on the agenda in Havana and and the accord, which states that the two sides will work in tandem to eradicate coca, will be implemented when the final peace deal is signed.

“That means that the guerillas, who in the last 30 years have been the biggest obstacle to the Colombian government in replacing illicit crop cultivation, from the moment we sign, become allies. It is a 180 degree change of the paradigm.”

Let’s not forget that the bill that legalises medical marijuana also legalises the production and export of cannabis-based medicines to countries where they are legal. This could actually provide a viable alternative to coca production, and additional tax revenue for the state.

From exclusion to inclusion

Obviously the question of legalisation and decriminalisation are important parts of the debate. However, much of the rhetoric around the upcoming conference is focused on the need for change – and for flexibility in the interpretation of existing rules – rather than a direct call for legalisation.

Supporters of legalisation claim that 400,000 Colombians suffering from epilepsy and other ailments could benefit from the legislation. Medical marijuana has had proven benefits in tackling illness such as Crohn’s Disease, HIV, seizures and nausea.

There is also the issue of social inclusion and wellbeing. Santos has repeatedly spoken out against the stigmatisation of drugs and drug-users in society, believing that it is better for society if we find ways to help drug users rather than criminalise them.

He has certainly not rejected the idea of legalisation, but says such moves need to be part of a global consensus. He advocates an evidence-based approach: marijuana was legalised because it has a number of proven medicinal attributes. He told the BBC that “there is no scientific evidence that cocaine or heroin are good for any type of active ingredient in medicine. If evidence of this arrives tomorrow then I would do the same.”

Critics of Santos’s liberal approach argue that reforms will do more harm than good. Procurador Alejandro Ordoñez told local media that legalisation “weakens the fight against drugs and threatens citizens”. He cites increased hard drug use as an unwelcome consequence of freer access to marijuana.

And evidence in a UN World Drug Report suggests this could be true. In 2015 the UN sent a mission to Uruguay, the first country to fully legalise marijuana, over fears of an impact on public health. Their report is due early next year, but is expected to tally with results from the US states of Colorado and Washington, where consumption has risen following legislation.

There are also practical concerns about legalisation. The current bill states that anyone may apply for a license to grow and sell marijuana. Yet access to licenses is likely to be dominated by large corporations, warns Marcela Tovar Thomas from the Centre of Thought and Action for Transition. She told Vice News that the government must “guarantee equal access to permits, which is not the same as monopolised control from the big pharma companies.”

Related: from coca to cacao, Vichada’s transition to legal crops

Fears of subjugating previously illicit substances to the free market are understandable. Whilst corporate monopoly is one worry, corporate desire to increase sales and thus consumption is equally troubling. Research coordinator for the UN World Drug Report Francisco Thoumi told the PanAm Post that the freer the market becomes, “The more it will resemble the situation with tobacco and alcohol, in which the private sector simply uses marketing strategies to increase its sales.”

Santos has made his departure from the old days very clear. There will be no more indiscriminate crop spraying, no more repression of small-time farmers and no more obsession with treating drugs as an issue of supply and demand. Now his challenge is to build an international consensus towards new ideas and approaches that don’t have the PR friendly ring of a ‘war on drugs’.

On top of that, he needs to make sure that his new policies will truly empower the weak, and that any forms of decriminalisation do not result in a new kind of exploitation.

We know a little of what the Colombian delegates will argue at the conference. We know that many believe the ‘war on drugs’ is a war against marginalised groups of society. And we know that the alternative ideas appear to have a good amount of support.

But the future of drug policy remains uncertain and shall do until experimental alternatives give evidential grounds for new strategies. This period of limbo will be hard to accept by a nation where drugs have been synonymous with tragedy. But when it comes to rational policy, the uncertainty of experimentation is surely better than the certainty of continued failure.