Colombia’s conflict didn’t disappear, it’s just went under the radar. But for how long? We report from the troubled region of Sur de Bolívar.

Santa Rosa’s plaza is like in any small town in Colombia: Old folk on benches under shady trees, kids playing hopscotch near a broken fountain, weather-beaten women selling freshly-squeezed orange juice and a scrawny shoe-shine guy trying to polish your trainers.

Except this hectic market town is nestled in the green hills of the Sur de Bolívar – the cocaine and gold-rush heart of Colombia. It’s the focal point for every bad-ass armed group in the country, and even one from Mexico, according to a friend showing me around the town.

“The Cartel de Sinaloa, they’re here too,” he murmurs.

The feared Mexican narcos keep bad company. ELN guerrillas hide out in the distant hills of the Serranía de San Lucas, a rugged green ridge dividing Río Magdalena and Río Cauca. Down by these rivers, ex-paramilitary groups like the Clan del Golfo keep the lowland communities clamped down with extortion, threats and selective killings. Somewhere in between is a baker’s dozen of smaller gangs vying for a bigger slice of the gold-and-cocaine pie.

“In the old days, at least we knew who we were dealing with,” says my friend wistfully. He’s talking of past decades when the area was dominated by one guerrilla army. With the current mishmash of pistoleros it’s hard to figure out who’s who, and dangerous even to try.

And these irregular gangs keep shifting territory, making and breaking uneasy truces, creating invisible barriers – both in towns and the green hills – and keeping everyone on their toes. One thing my friend is sure of: they all have eyes on Santa Rosa’s plaza.

With this in mind, I sidle up to a guy hawking slices of pineapple. His yellow slabs of juicy piña are some of the best I’ve tasted. But are they a front for a hardened sicario? He gives me my change and a broad smile. Maybe he’s just a fruit seller after all.

Conflict? What conflict? Surely the post-peace-process country has turned a corner. Tourists are flooding in. Escobar’s ranch is a theme park. Hey, we’ve joined the OECD!

The problem with Colombia’s current crisis is you can rock up in the hot zone and everything just seems normal. Conflict? What conflict? Surely the post-peace-process country has turned a corner. Tourists are flooding in. Escobar’s ranch is a theme park. Hey, we’ve joined the OECD!

But it’s simply not that simple. In Sur de Bolívar, multiple armed groups go under the radar for the mutual pursuance of instant fortunes. Greed keeps the lid on the pressure cooker, but the heat is still on. Meanwhile there are new rules designed to keep conflict contained and the cash flowing.

The first is: If you’re digging in your own illegal gold mine, keep digging. Towns like Santa Rosa are riding the bonanza with every other shop selling water pumps, pipes, generator plants, picks, axes and beer. Less obvious are the suppliers of mercury and cyanide, contaminants used to leach gold out of the soil.

Gold mining is seen as the “lesser illegal activity compared to cocaine production,” my friend explains, so miners drive from town to the mines unhindered in their pimped Land Cruisers or Hummers (there are supposedly three in town). And they tend to avoid gunfights.

“There’s huge profits to be made, so they focus on the work,” explains my friend.

But in Santa Rosa, miners are as good at losing money as finding it. At 9am, café tables are crammed with beer bottles as blurry-eyed diggers celebrate their latest strike. Later in the pachanga, daft bets will be laid and riches lost on a handshake. According to town gossip, last month, one local chancer staked 350 million pesos on who’d win the mayoral election.

According to my contact, the boomtown days might be ending. For decades the state has also coveted the gold, or at least control of the mines which they can sell to foreign mining companies. Then with taxes the state can improve the roads and infrastructure. And reduce mercury run-off into the rivers.

It all makes perfect sense. Unless you already own your own goldmine, in which case swapping it for a monthly pay-check from Anglo Ashanti is a bad deal. “The small-scale miners won’t give up without a fight,” predicts my friend.

Happy to help them in that are the ELN guerrillas, who tend to tax the illegal mines rather than waste too much time doing their own digging, freeing themselves up to grow coca, plant landmines, recruit teenagers and set up roadblocks to spray-paint cars with political slogans every July 3 (their birthday). As an armed group based on ideology, after 55 years it must remind everyone it’s still around.

Gold mining is seen as the “lesser illegal activity compared to cocaine production,” my friend explains, so miners drive from town to the mines unhindered in their pimped Land Cruisers or Hummers.

And recently the ELN has expanded through Sur de Bolívar, filling the demobilised FARC’s muddy boots. Unfortunately, this push comes with numbskull plans such as their recent attack on the main road from San Pablo.

The guerrillas planted four roadside bombs attached to a tripwire from which dangled an ELN flag, which also had a bomb. The plan was to block the road for a few hours, maybe make the army bomb disposal guys sweat a bit.

But it was still dark when they set the device and they didn’t count on a merry miner charging down the road from Santa Rosa at 5am in his armoured Land Cruiser. He collected the string, the flag and the small bomb – which exploded – and flew into a roadside ditch (and, amazingly, survived).

Old habits die hard, though, so when not running cocaine labs, the Clan, along withsimilar ex-para gangs, impose control through political killings.

Despite old-style guerrilla tactics, these Cuban-Marxist revolutionaries have their own new rules, such as selling coca leaves – the raw material of cocaine – to their political and ideological opposites, gunmen from the Clan del Golfo, a group descended from right-wing remnants of paramilitary armies that terrorised the region with massacres in previous decades.

Related: Going Local: A church for all seasons

Old habits die hard, though, so when not running cocaine labs, the Clan, along with similar ex-para gangs, impose control through political killings. According to their new rules, these assassinations – often of social leaders – are single murders done infrequently.

“The goal is to kill enough to keep the community petrified, but not so often to spark a big reaction from state forces,” explains my friend.

Now we’re in a small bus heading from Santa Rosa to Simití, a historic town – older even than Mompox – set by the bluest lake ringed by the greenest hills, quite simply the most beautiful view I’ve seen in Colombia.

The town feels abandoned, but recently joined to the main ports of the Río Magdalena by a new tarmac road. More surprisingly, a spanking new hospital sits on the outskirts, complete with specialist services.

Nearby a local NGO has set up a tilapia fish farm and training centre for young campesinos with crops to feed their families and excess to sell. Local cacao cultivators are feeding international demand. If these social changes take root, they could suck the oxygen out of the armed groups. That’s not supposed to happen in Colombia. But, hey, new rules.

We have a cold beer and watch cormorants in the lake as the sun sets behind the Serranía de San Lucas. A local guy joins us and points to the ridges. Some days before the guerrillas were up there “dando plomo” – giving lead – to army troops on patrol.

But these are no ordinary troops. The state has deployed a special task force of 2,000 troops – the Fuerza de Tarea Marte – with anti-drug police and close air support. Their first targets are the ELN and Clan del Golfo. Then gold mines and recuperating state taxes. Taxes that could disappear into some politico’s pocket. Or pay for more roads and hospitals.

How it will end? No-one knows. The Sur de Bolívar has been impenetrable for decades. But everyone feels a wind of change. New rules. 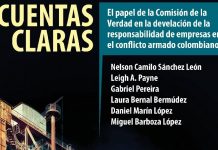