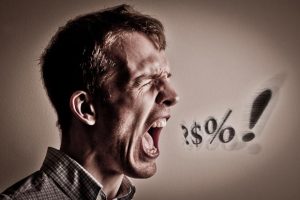 Swearing in a foreign language is something that can easily make you sound very strange. Oliver Pritchard guides us through one of his favourite pastimes

Swearing. Cursing. Potty mouth. Docker’s language. Salty words. Call it what you like, using words normally considered taboo is an important part of using languages. In different languages these vary – Catholic countries like to say things about prostitutes and/or mothers; north European languages like to discuss body parts or effects. Japan focuses on a range of subject changes for politeness, basically a very elaborate extension of tu/usted.

In English, as in most languages, there are fairly strict levels of swearing. It is important to learn which words are appropriate for which situations. Although some people (Hi Mum) will say you should never swear, everyone (Hi Mum, again) does it in certain situations. Some people will often say it shows a limited vocabulary, and this is far from true. I have a copy of the Viz Profanisaurus at home with literally hundreds of words and euphemisms. Not only that, but swearwords often conjugate and form verbs from nouns in a very flexible manner.

I used to work with a Canadian who told all his students to stop using fuck because it was lazy. He was an odd fellow, but he was right about this. Fuck is a regular verb, and has standard noun, adverb and adjective forms. It also forms lots of expressions and a couple of phrasal verbs. Again, an example of the remarkable flexibility of swearwords. Fuck off (verb) you fucking (adj) fuck (noun), you’ve fucking (adv) fucked (verb) this fucker (noun). A total fuck-up (noun), it’s totally fucked (adj).

However, this flexibility creates some problems. There are some strange rules around fuck. Let’s start with the phrasal verbs. Fuck off means go away. It is not always rude and conjugates: “We’ve fucked off. See you in the pub.” However, telling someone to fuck themselves is not as flexible, and is always rude. Fucking around/about with/with (someone) means to not be serious, so the Spanish no me joda translates as don’t fuck me around or don’t fuck with me. Without the preposition, it sounds like you are resisting sex. Fucking up means to do something bad or wrong. Enrique really fucked up his CV, for example. To not give a fuck means not to care about something. In the USA this is often used with the ‘not’, but with the same meaning.

To not be fucked is an unusual form, and means you are too lazy to do something. “Go to Suba? I can’t be fucked, mate.” Fucked up as an adjective means to be cruel, messed up and also drunk. Fucked means to not be working. Fucking as an adjective/adverb is simply an intensifier.

More or less the same as mierda in Spanish, although a little stronger. You won’t hear this much on TV, for example. Again, it’s flexible. As a noun, if something is the shit, that’s good. As an adjective it’s always negative, and that’s true for the verb, which is slightly less common.

This is the biggest regular swearword in the language. It’s not used much on TV, with the exception of the excellent Deadwood. It has some serious problems associated with it. For a start, it can be very aggressive (look up the Xerox Girls for an example). In Australia, Ireland and the UK it’s used as part of banter among friends. But be careful: this should only be done in very informal situations with very close friends. In the US and Canada, it’s used more against women, and is very extreme. In contrast, in Australia, Ireland and the UK it is very rarely used against women. These countries also sometimes use it as a verb.

This is something you should never use, unless you’re black. Not ‘non-white’ but actually black. Even then, it’s a very difficult word to get right, and getting it wrong can get you into real trouble. Using this word in a workplace could easily get you sacked. A student of mine in the UK was actually stabbed for using the word wrongly. It is not the same as negro in Spanish (black Colombian friends tell me they don’t really like negrito either). Even if you’ve heard it lots in rap music, it’s still not OK – especially as those rappers actually use the word very carefully. Although this is the most high profile word like this, there are plenty of others relating to race.

It’s often necessary to use minor swearing. For example, dick might be a bit strong, but penis sounds far too formal/scientific. For occasions like this, we often use minor swearwords, not necessarily things to say in front of children, but also not things that will offend most adults. It also helps us to sound more casual and relaxed when speaking. Here we will see boobs for tits; cock for dick; poo for shit; bum for arse (UK) and butt for ass (USA) etc. Fanny means bottom in the US and front bottom in the UK, but is not very strong in either.

When to use which word?

To talk about someone you don’t like, you need to think about how much you don’t like them. [Or you could just say nothing at all – Ed.] If they’re just stupid or difficult, you might say tosser, dickhead or asshat. However, if they’re actually mean or deliberately nasty, you might say wanker, fuckhead, twat or even go as far as the C word. For women you can use bitch, which normally means she is mean or unkind.

When something goes wrong, “for fuck’s sake!” and “shit!” are the standard high-level swearwords. Just like Mier…coles in Spanish, we also use Sh…ugar in English if kids might be listening. If you want more polite language, try “rat’s cocks” or “bollocks”. If you are in more polite society, try “for god’s sake” or “for pete’s sake”.

To express disbelief, use “bollocks” or “fuck off”. Note that the second is more aggressive.

To emphasise something, just put fucking before the noun or adjective and it immediately becomes more passionate. “That was a fucking joke, referee.”

So, hopefully this was a useful guide to negotiating the difficult world of swearing. If you’re in a situation where you have to swear, you don’t want to get it wrong as that will weaken your point: People swearing in other languages sometimes sound like little children and not angry adults. Don’t make that mistake, and do look up the Viz Profanisaurus for much, much more swearing.